Many vocations are marked by a pathway considered to be the apex, or at least the most respectable, expression of that vocation. The most ambitious business leaders become CEOs of corporations. The most creative chefs open restaurants bearing their name. The most brilliant doctors become surgeons. And the most gifted theologians become professors. For theologians, a lighter course load and more time for research and writing is ideal.

Like many gifted theologians, the late R. C. Sproul (1939–2017) served as a professor at times. Teaching in brick-and-mortar academic institutions is not what defined his legacy, though plenty of his former students still speak to his influence in the classroom. Rather, Sproul was a theologian for the people. His calling was to bring theological education to everyday believers who weren’t pastors, had not attended a Bible college or seminary, and weren’t inclined—at least at first—to read substantive works of theology for fun.

Church historian Stephen J. Nichols, one of Sproul’s successors at Ligonier Ministries and Reformation Bible College, has written the first biography of Sproul. It likely will not be the last. R. C. Sproul: A Life is a well-researched, sympathetic biography of an iconic evangelical theologian. Sproul used his immense gifts to help believers around the world understand the doctrinal emphases and practical implications of evangelical theology in the Reformed tradition. 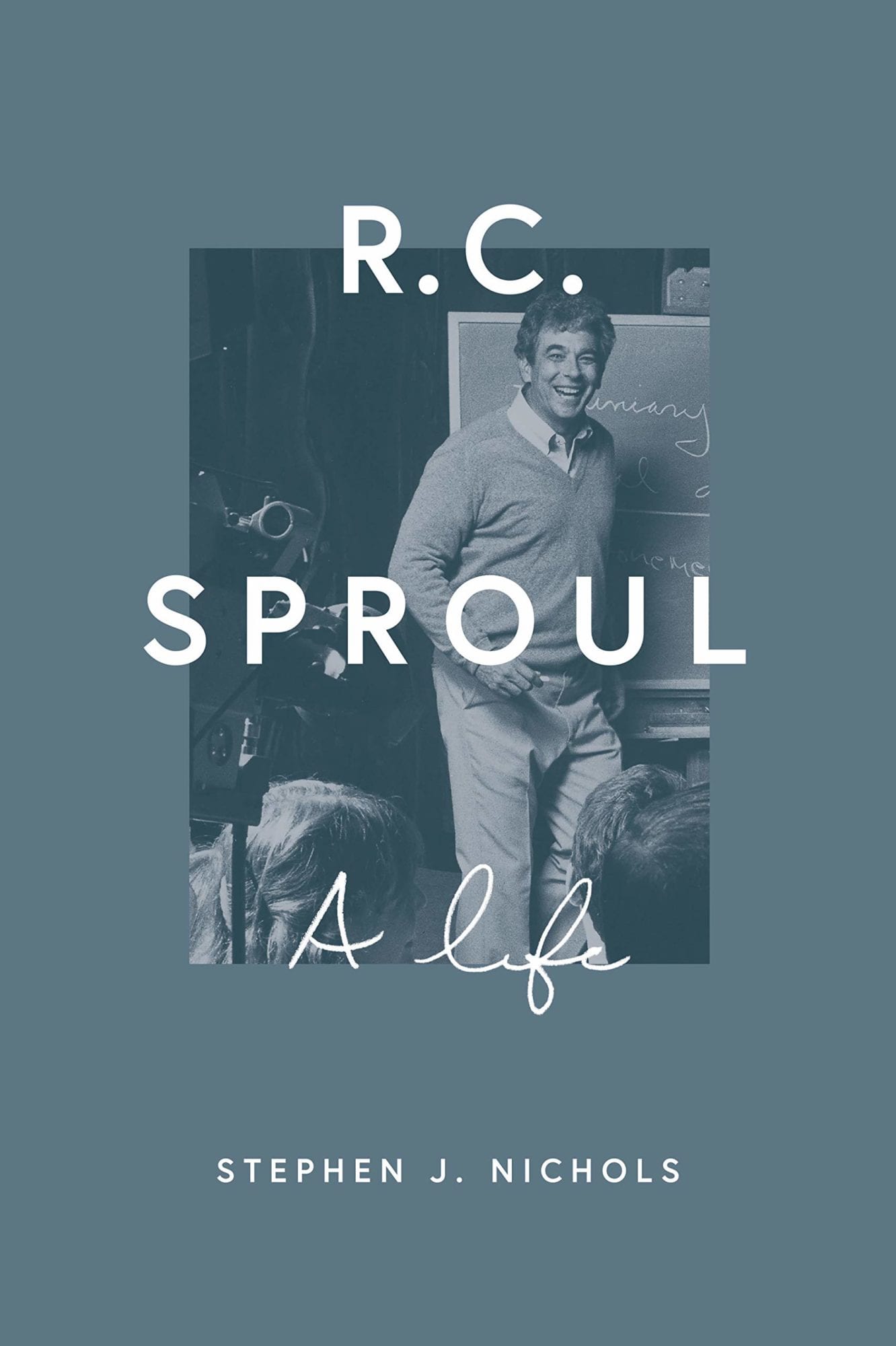 R. C. Sproul (1939–2017) was a pastor, professor, author, and the founder and president of Ligonier Ministries. His contributions in the areas of biblical studies, theology, worldview and culture, Christian living, and church history are held in high regard.

In this book, Stephen J. Nichols offers an in-depth look at Sproul’s life and ministry—his childhood; his formative seminary education; his marriage and partnership with his wife, Vesta; his influence on broader American evangelicalism; and his many friendships with key figures such as James Montgomery Boice, John MacArthur, John Piper, J. I. Packer, and Chuck Colson. This biography details the profound influence Sproul had on the lives of many during his lifetime, and highlights the various ways his legacy continues to influence pastors and students worldwide.

Making of a Battlefield Theologian

Nichols begins his narrative by rehearsing Sproul’s early years and education. A native of Pittsburgh, Sproul was a natural athlete who loved the Pirates and Steelers to the end of his life. His earliest years were shaped deeply by his father’s service in World War II and subsequent death during Sproul’s teenage years.

Sproul was nurtured in a context dominated by liberal Presbyterianism. The longtime pastor of his childhood church denied the bodily resurrection. Sproul studied at Westminster College and Pittsburgh Theological Seminary, both liberal institutions. Sproul’s theological trajectory could’ve turned out much differently. But God had other plans.

During his freshman year at Westminster, Sproul was converted to personal faith in Christ. He studied philosophy, led his wife and lifelong ministry partner, Vesta, to faith in Christ, and finished college a committed evangelical. At Pittsburgh Seminary, Sproul studied with theologian John Gerstner, the school’s most conservative faculty member, who convinced Sproul of the value of classical (Thomist) apologetics and the truth of Reformed theology.

The two remained close friends and frequent collaborators. At Gerstner’s urging, Sproul pursued doctoral studies with G. C. Berkouwer at the Free University of Amsterdam. By the time Sproul began his teaching career, he was what Nichols calls a “battlefield theologian” committed to defending the orthodox Reformed and evangelical faith against theological liberalism and other rival worldviews.

During his career, Sproul was near the center of the some of the most hotly contested debates among evangelicals. Some of these debates could be classified as family squabbles among conservative evangelicals. He advocated classical apologetics in contrast to presuppositionalism, which was popular with many Reformed theologians, and evidentialism, which was the more common view in the wider evangelical movement.

He was also a staunch Calvinist who affirmed Reformed theology long before there was a Young, Restless, and Reformed movement. His books such as The Holiness of God (1984), Chosen by God (1986), Grace Unknown (1997), and the New Geneva Study Bible (1995; later the Reformation Study Bible) contributed to the revival of Calvinism among evangelicals in the final two decades of the 20th century.

The stakes were higher with other controversies that Sproul believed threatened evangelical faithfulness. He was a complementarian who left mainline Presbyterianism and joined the newly formed Presbyterian Church in America because he opposed women’s ordination. Sproul was also a tireless defender of the full trustworthiness of Scripture and played an instrumental role in developing the Chicago Statement of Biblical Inerrancy. In the course of his career, Sproul wrote widely on the inspiration, authority, and interpretation of Scripture.

Sproul was a tireless defender of the full trustworthiness of Scripture.

Perhaps the most acrimonious dispute of Sproul’s career was his defense of traditional Protestant views of justification at a time when many of his fellow evangelicals—in some cases, close friends—were building bridges with Roman Catholics because of mutual concerns about issues such as abortion, homosexuality, and religious liberty. Sproul appreciated that Protestants and Catholics share much in common, but the differences remain significant enough to constitute different gospels. Sproul remained strongly critical of ecumenical initiatives such as Evangelicals and Catholics Together and The Manhattan Declaration because he believed they compromised classical Protestant (and thus biblical) faith.

Theologian for the People

While Sproul served at various times as a professor in colleges and seminaries, he wasn’t called first and foremost to the theological academy. Like his hero, Martin Luther, Sproul believed in taking theology to the people. In 1971, Sproul founded Ligonier Ministries, named for the Ligonier Valley in Pennsylvania that was home to the retreat center where his family lived and where he taught visitors theology, philosophy, and apologetics.

Modeled in part on Francis Schaeffer’s L’Abri, the retreat center was home base until 1984, when Ligonier Ministries moved to Orlando, Florida. Sproul was also a frequent speaker at theology and Bible conferences from the 1970s until his death. In 1988, Ligonier began hosting a national conference that became one of the flagship annual conferences dedicated to promoting Reformed theology and related themes.

Evangelicals have always shown an entrepreneurial streak for innovative strategies to communicate the gospel. Sproul embodied this evangelical entrepreneurialism, though he applied it more to theological formation than evangelistic outreach. Ligonier published Tabletalk, an homage to Luther’s informal musings about theology and life, which included popular articles about a wide variety of topics related to theology, church history, philosophy, and ethics.

In 1994, Ligonier launched a daily radio show (and later podcast), Renewing Your Mind. Sproul carved out a niche in a crowded field by focusing on theological teaching rather than traditional sermon series. He wrote a raft of books, booklets, articles, and chapters of various types. While some of this material was geared for a more academic audience, most were written to equip thoughtful laypeople and fortify ministers to be battlefield pastoral theologians.

Given his commitment to translating theology for everyday believers, Sproul gravitated to pastoral ministry later in his career. Beginning in 1997, he served as the founding pastor of Saint Andrew’s Chapel. Though the church was technically an independent Reformed congregation, her ministers were all ordained in the PCA. Saint Andrew’s was characterized by Sproul’s expositional preaching, a commitment to a Reformed version of a high liturgy, and traditional worship music.

Sproul has placed an indelible mark on the evangelical movement. He made philosophy accessible and demonstrated the value of apologetics. He spread Reformed theology widely and reinforced the value of systematic theology and church history. He championed biblical inerrancy and defended the reformational view of justification in an era when both were hotly debated.

He was captivated by a vision of God’s holiness, which permeated his teaching and writing ministry. But what stands out most about Sproul is that the driving force behind all these efforts was a vision of theological education for everyday believers. Sproul believed that theology enables all Christians to think rightly about God and his world for the sake of living rightly before God in his world.

Sproul believed that theology enables all Christians to think rightly about God and his world for the sake of living rightly before God in his world.

Theology at its best isn’t a discipline for the academy, but is a ministry of the church. I think he was absolutely correct, which is why I’m so thankful to God for Sproul’s life and legacy, even though I’m a Baptist who differs with Sproul on any number of secondary and tertiary theological positions. My prayer is that Nichols’s wonderful biography will introduce Sproul and Ligonier to a new generation of everyday believers—and lots of pastors and seminaries, too. We need his vision and his voice now more than ever before.