The book had an unremarkable pale blue cover, and the author’s name was unfamiliar. The title, on the other hand—Resurrection and Moral Order—immediately captured my attention. “Resurrection” and “moral order” didn’t have any immediate connection in my mind. Then I started reading.

The book said moral life is fundamentally theological. I still recall the spiritual and intellectual rush of reading it for the first time. By the time I was done, I was corresponding with the author, Oliver O’Donovan, about becoming his student. 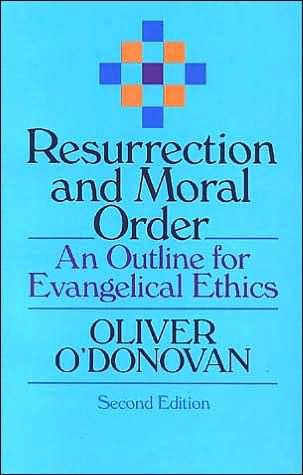 O’Donovan is a complex figure. He’s arguably one of the most seminal theologians of the last half century, and he’s spectacularly productive. He commands tremendous attention across a wide range of theological disciplines, yet remains something of a pariah. He is Anglican and Augustinian, but even these identifiers have interpretive limits. His contributions prompt new lines of theological discourse.

What accounts for his distinctiveness? O’Donovan is a churchly theologian. He poses the right questions, always begins with Scripture, converses knowledgably across theological traditions, and offers encouragement and instruction for living with God in the world.

O’Donovan was born in 1945 to two gifted writers. As a child he attended All Souls Church (London), where John Stott served for many years as rector. At Oxford he studied classics, culminating eventually in a doctoral thesis on the concept of self-love in Augustine, supervised by church historian Henry Chadwick (1920–2008).

O’Donovan’s first formal teaching position was at Wycliff Hall, Toronto, where he taught from the late ’70s to early ’80s. In Toronto he met his wife, Joan Lockwood, now a renowned Anglican theologian. In 1982 O’Donovan was appointed Regius professor of moral and pastoral theology and canon of Christ Church at the University of Oxford in 1982. There he remained for nearly 25 years, until assuming the post of professor of Christian ethics and practical theology at New College, Edinburgh, in 2006. The “emeritus” title was bestowed upon his retirement in 2013. Notable among his awards are fellowships both to the Royal Society of Edinburgh and to the British Academy.

The best way to understand O’Donovan’s theological project is to focus on the questions that animate his work:

Resurrection and Moral Order is among the most important contributions to theological ethics in the last half-century.

Since these sketches oversimplify the breadth of O’Donovan’s work, here are a few additional reasons why his work deserves wide and careful reading today.

Oliver O’Donovan is a man of learning, wisdom, and erudition. He’s also a man of profound pastoral sensibilities. I learned from him that theology could be done with joy and deference to Christ and his gospel, and I highly recommend that others read his books and learn from him as well.