Candida Moss’s The Myth of Persecution: How Early Christians Invented a Story of Martyrdom is written for a readership familiar with conspiracy theories in which a sinister elite manipulates history for its own dastardly ends. In this case, it’s the fourth-century Christian bishop Eusebius of Caesarea who has invented most—if not all—of the martyrdom narratives of the first three centuries to reinforce what he regarded as a tradition of orthodoxy.1 A professor of New Testament and early Christianity at the University of Notre Dame, Moss has the scholarly credentials and knowledge to make her case sound convincing, though, in the final analysis, her thesis is far from compelling. She’s doubtless right to maintain the experience of the ancient church was not one of relentless persecution. As respected historian Everett Ferguson has noted, “Christianity was occasionally repressed in sporadic persecutions, but there was no general effort to root it out.”2 On the other hand, it seems equally exaggerated to argue, as Moss does, that only six martyrdom accounts have any semblance of authenticity.3 Indeed, by the time even these accounts have been subjected to Moss’s withering criticism, there seems to be virtually no evidence for persecution in the early centuries.

Rather than examine each of these accounts I’ll focus on one martyrdom story—Polycarp of Smyrna’s—to see what response can be made to Moss’s thesis. Charles Hill has recently reiterated the statement of Helmut Koester that Polycarp, bishop of Smyrna and one-time disciple of the apostle John, was “doubtlessly the most significant ecclesiastical leader of the first half” of the second century.4 The letter from Ignatius of Antioch—also a martyr—to him would’ve made his name known throughout the eastern Mediterranean, since collections of Ignatius’s letters circulated widely. And in the account of his martyrdom, Polycarp’s pagan persecutors describe him as “the teacher of Asia, the father of the Christians, the destroyer of our gods.”5 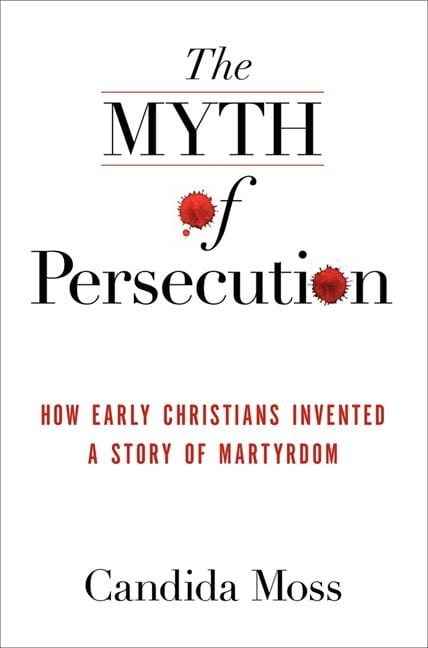 In Moss’s main discussion of the text of Polycarp’s martyrdom, reckoned to be an eyewitness account from the mid-150s, she argues the story of his death is probably a third-century invention.6 Her reasons are essentially fourfold. First, elements of the account seem like a repetition of the Gospel accounts of Jesus’ death: “Polycarp retreats outside the city [of Smyrna], prays there, enters the city on the back of a donkey, is betrayed by someone close to him, is arrested at night, and is opposed by a figure named Herod and by bloodthirsty Jews.”7 Then there are a couple of miraculous events—the heavenly voice heard when Polycarp enters the stadium in Smyrna where he will die and the smell of his burning flesh as he is martyred, “like (hōs) bread baking or like (hōs) gold and silver being refined in a furnace” or the odor of frankincense8—that raise suspicions in Moss’s mind that the entire account is a fabrication.9 Third, she finds the text’s emphasis on the relics of Polycarp’s body10 and the explicit rejection of the concept of voluntary martyrdom11 to be anachronistic. According to Moss, both the devotional interest in relics and the condemnation of those volunteering for martyrdom are part and parcel of the third-century church scene rather than the middle of the second century. Finally, Moss argues the Martyrdom of Polycarp is supposed to be “the first text to recognize the category of martyrdom and develop a real theology of martyrdom,” but everything in the account seems to assume martyrdom already exists as a developed concept in the life of the Mediterranean churches. This must mean the text was written well after the events it purports to describe.12

Now, it must be admitted Moss’s first reason does make sense. The parallels with the life of Christ do seem a little contrived, though this point doesn’t mean one has to dismiss the entire account as inauthentic. As Clayton Croy notes, Moss’s contends that if any editorial emendations or literary devices were used at all, the whole account is worthless as history. He rightly observes:

Surely literary flourishes versus historical information is a false dichotomy. The same is true for allusions to the Gospels, alleged anachronisms, and other peculiarities. Some of these are hardly as compelling as Moss thinks; others, even if valid, scarcely require us to dissolve the account into sheer fiction.13

The fact that this account of Polycarp’s martyrdom has certain stylized literary features doesn’t mean Polycarp didn’t die as a martyr.

Then, Moss’s approach to the miracles in the Martyrdom of Polycarp is typical of New Testament scholars who approach the canonical Scriptures with a hermeneutic of suspicion. Miracles simply do not happen, hence any account of them renders the document containing them suspect. It’s also noteworthy that with regard to one of the miracles—Polycarp’s burning flesh being like the smell of baking bread, of gold and silver being refined, and of incense—the use of the term hōs indicates a series of analogous comparisons are being made. As Polycarp was consumed by the flames, it was as if the smell issuing forth from the flames was like bread in an oven, or like gold and silver in a smelter’s furnace, or lit incense in a temple. Surely the author is indicating Polycarp’s death was well-pleasing to God in a way similar to the New Testament’s insistence that the Christian life being a sweet-smelling aroma to him (e.g., Eph. 5:2). As for the mention of preserving Polycarp’s remains, Moss’s contention that this is anachronistic and redolent of third- or even fourth-century practice seems somewhat arbitrary. A practice has to start somewhere, and this may well be the beginning of what would become a major feature of piety in the early Middle Ages after the collapse of the Western Roman Empire.

The same reasoning can be made with regard to the rejection of voluntary martyrdom—a leading feature of the Martyrdom of Polycarp. Martyrdom according to the gospel is not voluntary. But this different approach became a major problem for the church after the rise of Montanism in the 160s, a decade or more after Polycarp’s death. And although Montanism took its rise from Phrygia, from where the volunteer martyr Quintus hails, this doesn’t mean Quintus is a Montanist. If Quintus was being identified as a Montanist, any text written after the rise of Montanism would have made this identification explicit. Could it not be the case that Quintus was actually from Phyrgia? And could it not be the case that the Phrygian church had a tendency in this regard even before Montanism emerged in the region?

Finally, as for the Martyrdom of Polycarp being the first text to develop a theology of martyrdom, this belies the evidence of a number of other late first- and second-century texts that Moss well knows but omits since they’d damage her argument. Which texts? Consider the account of Revelation 2:13 (the martyrdom of Antipas); the letters of Ignatius, written by common reckoning in the first decade of the second century, all of which breathe the air of martyrdom;14 and the Odes of Solomon, a number of which speak explicitly of violent persecution.15

What’s been argued with regard to the Martyrdom of Polycarp can be argued for each of the other six accounts Moss rejects as authentic: more or less they bear witness to the violence perpetrated against the church by the Roman state. No, this violent persecution wasn’t as extensive as some accounts would have it, but nor was it the light and momentary burden Moss would have us believe.

Modern Christians are not wrong, then, when they remember that from the beginning the church has often gone the way of her Lord along an ignominious path of societal and cultural ostracism that has ended in violent death.

1 The Myth of Persecution: How Early Christians Invented a Story of Martyrdom (New York: HarperCollins, 2013), especially 215­­–246.

3 Myth of Persecution, 92. The six martyrdom accounts are those regarding (1) Polycarp of Smyrna, (2) Justin Martyr, (3) Ptolemaeus and Lucius—all three in the middle of the second century—(4) the martyrdom of Pothinus, bishop of Lyons, and other believers in southern Gaul around 177, (5) the Scillitan Martyrs in 180, and (6) Perpetua and her companions in North Africa at the turn of the third century.

4, From the Lost Teaching of Polycarp. Identifying Irenaeus’ Apostolic Presbyter and the Author of Ad Diognetum (Tübingen: Mohr Siebeck, 2006), 1.

11 See especially the account of Quintus in Martyrdom of Polycarp 4.

14 See especially his Letter to the Romans 5.3.

Michael A. G. Haykin is professor of church history and biblical spirituality at The Southern Baptist Theological Seminary.