For Chris Armstrong, faculty member at Wheaton College and founding director of Opus: The Art of Work, “The chasm between us and our medieval forebears in the faith has less to do with any intrinsic oddness of the Christians of that time and more with certain philosophical and cultural presuppositions of our own” (3). His new book, Medieval Wisdom for Modern Christians: Findng Authentic Faith in a Forgotten Age with C. S. Lewis, seeks not only to deepen our appreciation of the medieval church, but also to use medieval Christianity to redress various perceived problems and weaknesses with the modern church. To this end, he uses C. S. Lewis (someone already respected among evangelicals) as an entryway into the world of medieval Christianity.

In all of these areas, the doctrine of the incarnation, as understood by the medievals, makes the crucial difference (210–14, 233). As Armstrong argues, the central truth that God became man stood at the heart of medieval Christianity. This led them to a more embodied, holistic, “earthy” Christianity that held together faith and reason, head and heart, physicality and spirituality, Word and sacrament, monastic meditation and scholastic speculation. Armstrong even suggests that “in a sense, this entire book tells the story of what happens when we lose our hold on the incarnation” (209). 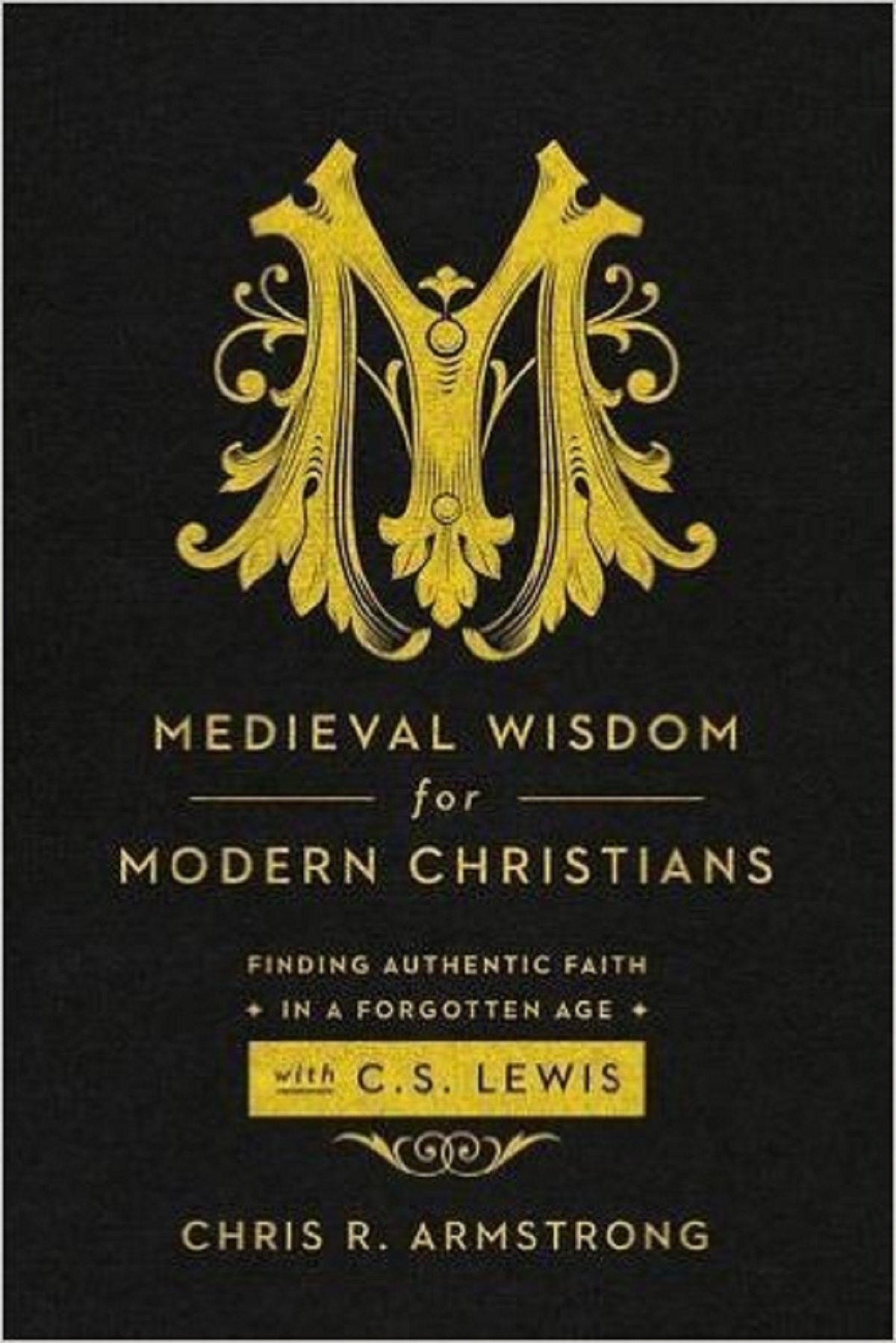 Throughout the book, Lewis serves as a guide to various medieval beliefs and practices. Chapter 2 shows how Lewis was thoroughly medieval in his imaginative instincts (e.g., 34–35) and in his own theology (e.g., 39–41), and most subsequent chapters open with a discussion of how Lewis approached a particular topic. Armstrong is well-versed in Lewis’s writings, as well as in medieval theology and literature. Including Lewis helps the book to work: it provides a clearer and more sympathetic entry point into many of its arguments while broadening its overall appeal.

Armstrong isn’t interested in exploring medieval Christianity simply as an academic exercise; he wants to use it to help problems with the modern (Protestant) church. Medieval Wisdom for Modern Christians is both a defense of that era as well as a fairly harsh critique of our own.

Armstrong faults modern Christianity for what he calls “immediatism,” by which he means essentially three qualities of modern thought: (1) our penchant for novelty (“chronological snobbery”); (2) our desire for immediate results (“pressurized pragmatism”); and (3) our simplistic view of knowledge as mediated directly by perception (he calls this “Common Sense epistemology,” drawing a correlation with 18th–century Scottish Common Sense Realism) (7–8). But Armstrong goes on to articulate another aspect of modern “immediatism”—that is, modern Christians’ perceived bias against various forms of churchly mediation (for example, liturgical expressions, priestly intercession and leadership, a robust view of the sacraments, utilizing art in worship, and so on).

In contrast to our modern immediatism, Armstrong emphasizes medieval “sacramentalism”—the idea that “the outward and visible can convey the inward and spiritual” (144). He believes that, in contrast to the barren, mechanistic, modern view of the universe, the medievals had a holistic approach to life and the material world that perceived God’s glory infused throughout creation. Even food, sex, and emotion can be appreciated as components of our spiritual existence before God (25–28).

In contrast to the barren, mechanistic, modern view of the universe, the medievals had a holistic approach to life and the material world that perceived the glory of God infused throughout creation.

Modern Christians, because we’ve lost our focus on Christ’s humanity, have lost a sense of our own humanity—our work, our culture-making, our suffering, and our dignity as God’s image-bearers (e.g., 233).

As an evangelical interested in medieval theology and who recently completed a dissertation on St. Anselm (1033–1109), it’s not surprising that I’m sympathetic to Armstrong’s appeal for modern Christians to learn from the medieval church. This case needs to be made, and it was especially gratifying to see it come from such a skillful and articulate writer. Medieval Wisdom for Modern Christians is an informed, insightful, and impressive book that successfully establishes many ways in which modern Christians need to learn from the medieval church.

In my own engagement with medieval theology, I’ve wrestled at various times with what the balance of a “critical appreciation” looks like—neither undiscerning nor unappreciative of the past. In responding to neglect, it’s easy to overemphasize; in applying a needed corrective, it’s easy to overstate; in opposing error on one side, it’s easy to err in the opposite direction. (Scholarship is an arena of life in which this tendency seems especially frequent.) So, as a friend to the cause of learning from medieval Christianity, I’m also wary of any mindset that implies, “We’re terrible; they were wonderful; and they can fix us.”

Armstrong’s book displays some sensitivity to this concern. He warns about the danger, for instance, of romanticizing the past, or applying it “cafeteria style” to the present (44). Nonetheless, some readers, particularly those of a Protestant mentality, will likely feel that the deficiencies of the medieval church—and the valid concerns of the Protestant Reformation in reaction to them—are somewhat downplayed.

For my own part, this concern arose (sometimes in the form of a question) at various points when Armstrong surveys aspects of medieval thought or piety that differ from that of evangelicalism. With respect to praying to the saints (59–60), purgatory (41), and transubstantiation (87–88), for instance, Armstrong seems mainly interested in explaining the concerns undergirding these doctrines, and fighting against caricature; one is left wondering what he believes about the doctrines themselves. He criticizes the Reformers for replacing the crucifix with a cross (208). He emphasizes that we misunderstand medieval devotion to Mary since it was “first and foremost a devotion to the incarnation as the key fact in salvation history” (193)—although he does state he’s not convinced by the lavish Marian devotion of Rome (192). In areas like these, Armstrong could have helped his Protestant readers more clearly discern what it looks like to embrace the medieval church without embracing Roman Catholic theology as such. From reading this book, it’s unclear where the Reformation represented a real advance from medieval Christianity.

We must listen carefully to what our medieval forbearers in the faith can say to us.

I appreciate Armstrong’s intentions to engage medieval theologians with humility and generosity; on one or two occasions, he seems overgenerous. For instance, he defends Julian of Norwich’s feminine references to Christ as a “natural development of affective devotion” (180), and his critique of her doctrine of the Fall is surprisingly mild considering his acknowledgement that “Julian portrays sin as having no reality; indeed, sin is nothing something for which God will not ultimately blame us” (181). The best appropriation of medieval wisdom should not just listen humbly to what’s helpful, but also plainly identify what’s eccentric.

Speaking with the Past

The overall appeal of Medieval Wisdom for Modern Christians is convincing and well made. Moving forward, if the goal of Protestant orientation toward medieval history is “critical appreciation,” this book will be more helpful on the “appreciation” part and softer or more ambiguous on the “critical” part.

We must indeed listen carefully to what our medieval forbearers in the faith can say to us—and, as we do so, we will also need to talk back to them at various times in light of the rest of the church history and, above all, in light of the Scriptures.