Maybe you’ve noticed the parade of marriage books released in the last several years or soon-to-be published by preachers. This list is not nearly exhaustive:

What does this trend tell us? Marriage is in crisis, and pastors want to speak up about the relational carnage they see on a daily basis. The statistics certainly support this theory. Take a look at this sobering report, “When Marriage Disappears,” which concludes, “In middle America, marriage is in trouble.” This is supposed to be the evangelical heartland, where traditional family values triumph. Pastors know differently, because the statistics step into their offices desperately looking for help, if they ever bothered to marry in the first place.

Tim Keller and his wife, Kathy, see a different perspective from their perch at Redeemer Presbyterian Church in Manhattan. Many young Christian men and women who move into the city pursuing education and a career carry traditional expectations to marry at a relatively young age. But that value quickly clashes with New York’s ethos, which tells men and women alike to achieve financial independence and build a stable career before they consider looking for a spouse. Dating distracts from these prerequisites, but casual sexual encounters can allegedly fulfill our natural urges in the meantime. The Kellers know many young Christians torn between these incompatible visions for marriage.

Their new book, The Meaning of Marriage, is unlike any other book on this subject I have read. Some books might aim to convince skeptical singles that marriage is God’s design for humanity rather than a social construct. Others might counsel engaged couples about what they should expect from sex, how to handle conflict, and how to make decisions when they disagree. Still more might aim to dissuade recalcitrant spouses from divorce or help disillusioned couples reconnect with their vows by giving them the biblical vision for marriage they should have learned from the beginning.

The Kellers write for all these audiences and more. That means sections aimed at responding to the critiques usually raised by 20-somethings in New York will not apply if you’ve been happily married for 35 years. Likewise singles won’t be able to immediately apply what the Kellers teach about sex, but they may learn from listening in on this counsel about how they should remain chaste until they marry. Indeed, this might be the rare marriage book I would heartily recommend to any single, no matter his or her age, whether dating, courting, engaged, or disinterested. Tim Keller explains that he set out to give singles a “brutally realistic yet glorious vision of what marriage is and can be” (12), and he does not disappoint. The glorious aspect can be seen in Ephesians 5, Keller’s primary text, which connects the gospel of Jesus Christ to the relationship between man and woman in marriage. The realistic vision comes in Keller’s repeated call for singles to consider spiritual growth and character in potential mates before they size up the opposite sex based on appearance and financial portfolio.

Kathy Keller writes an appendix on “Decision Making and Gender Roles” and chapter six, “Embracing the Other,” which covers Paul’s commands in Ephesians 5:22, 25: “Wives, submit to your husbands as to the Lord. . . . Husbands, love your wives just as Christ loved the church and gave himself up for her.” Keller did not arrive lightly at complementarian convictions. She shares how a majority of 350 pastors booed and hissed when she told the presbytery that she no longer planned to seek ordination. She offers wise counsel on when it is appropriate for a husband to overrule his wife and provides the fascinating background of the decision to move to New York and plant Redeemer, a plan she originally protested. 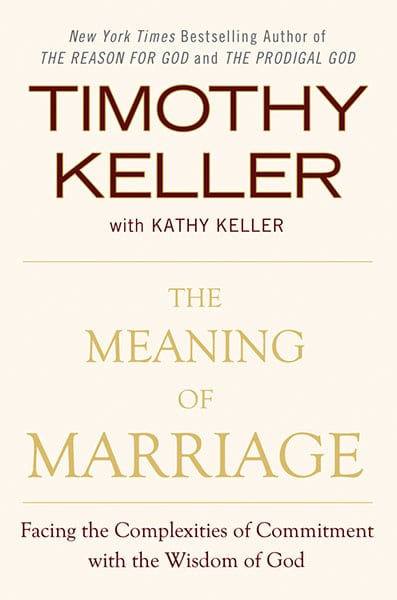 Modern culture would have you believe that everyone has a soul mate; that romance is the most important part of a successful marriage; that your spouse is there to help you realize your potential; that marriage does not mean forever, but merely for now; and that starting over after a divorce is the best solution to seemingly intractable marriage issues. But these modern-day assumptions are wrong. Timothy Keller, with insights from Kathy, his wife of thirty-seven years, shows marriage to be a glorious relationship that is also misunderstood and mysterious. The Meaning of Marriage offers instruction on how to have a successful marriage, and is essential reading for anyone who wants to know God and love more deeply in this life.

Tim Keller takes the lead in writing the rest of the book in the first person. He draws on a wide variety of sources to make an apologetic case for marriage. Before you read much about God’s glorious vision for marriage you’ll get a heavy dose of realism about the sorry state of this institution today. But as we’ve come to expect from him, Keller challenges these critiques on their own terms and exposes their futility. Never before, he argues, have humans held such selfish, idealistic visions for marriage. We want to marry someone who makes us look and feel good, so we set unattainable standards for potential mates. No wonder, then, that marriage has come to appear so oppressive and hopeless. Marriage is for “two flawed people coming together to create a space of stability, love, and consolation” (35). We have lost God’s meaning for marriage. Keller explains:

According to the Bible, God devised marriage to reflect his saving love for us in Christ, to refine our character, to create stable human community for the birth and nurture of children, and to accomplish all this by bringing the complementary sexes into an enduring whole-life union (16).

Given this definition, I would have loved to see more about marriage and parenting. Maybe a separate book is in the works, since he’s spoken on that subject, too, in the context of ministry at Redeemer. As always, Keller’s 23 years of experience counseling, preaching, and evangelizing in Manhattan make his reflection on marriage particularly rich and practical. Read this book, and you’ll gain a greater appreciation for the gospel of Jesus Christ, which is both the source of our ability to love in marriage but also our model for the self-sacrifice necessary to sustain any union. You’ll be much better equipped to either find a spouse if you’re single or love the one you’re with if married.