Eschatology is often narrowed to the events surrounding the return of Jesus Christ at the end of history. Systematic theology books place “last things” in the last chapter(s), giving the impression they have more to do with “then” than with “now.” Thus eschatology bears little apparent significance for how Christians and churches ought to live in the present.

In the words of G. K. Beale, however, the “major doctrines of the Christian faith are charged with eschatological electricity” (4).

Along these lines, Benjamin Gladd and Matthew Harmon have done the church a great service by exploring the link between inaugurated eschatology and pastoral ministry. In Making All Things New: Inaugurated Eschatology for the Life of the Church (with an introductory chapter by G. K. Beale), they show how various streams of pastoral theology and eschatology meet in Christ. Pastors shepherd the people of God through tribulational waters to their final home, a new creation—where the sea is no more (Rev. 21:1).

The authors accomplish their task in three parts. In Part I, Beale argues that the early Christians understood their place in history as the beginning of the end but not its consummation (ch. 1). All the Old Testament predicted would occur had begun as a result of Christ’s life, suffering, death and resurrection (11). Gladd and Harmon continue by explaining the nature of the end-time church (ch. 2) and describing life in the overlap of the ages (ch. 3). Through a guided tour of the Old Testament, they demonstrate that the promised restoration of God’s people would begin through one who—unlike Adam and Israel—would obey. As a result, the end-time people of God—Jews and Gentiles—live in the “latter days” as spiritually resurrected, Spirit-led kingdom citizens.

Part II applies this framework to three areas of pastoral leadership: feeding (ch. 4), protecting (chap. 5), and guiding (ch. 6) the flock. In feeding the flock, pastors call their people to look back on what God has already done in Christ and to look forward to the day when he returns to consummate his kingdom. They observe, “From the very beginning of the Bible all the way to the end, God does something for us (indicative), tells us about it (indicative), and then calls us to respond in certain ways (imperative)” (73).

Preaching, then, ought to give voice to this grammar of the indicative and the imperative. Moreover, pastors protect the flock from demonic assaults (ch. 5). As Gladd and Harmon demonstrate, the false teachers prophesied by Daniel and Jesus were operating within the church and the end-time “great tribulation” had begun (88). In light of these realities, pastors must faithfully proclaim the whole counsel of God and call believers to endure in the face of persecution, for “just as Christ ruled over the kingdom in a veiled way through suffering in an end-time trial or tribulation, so do Christians” (95). Finally, Gladd and Harmon show how the already-not yet affects church leadership (ch. 6). They place an eschatological charge on three leadership issues, exploring how pastors lead by example, treat Christians as part of the new creation, and minister in light of God’s end-time evaluation. 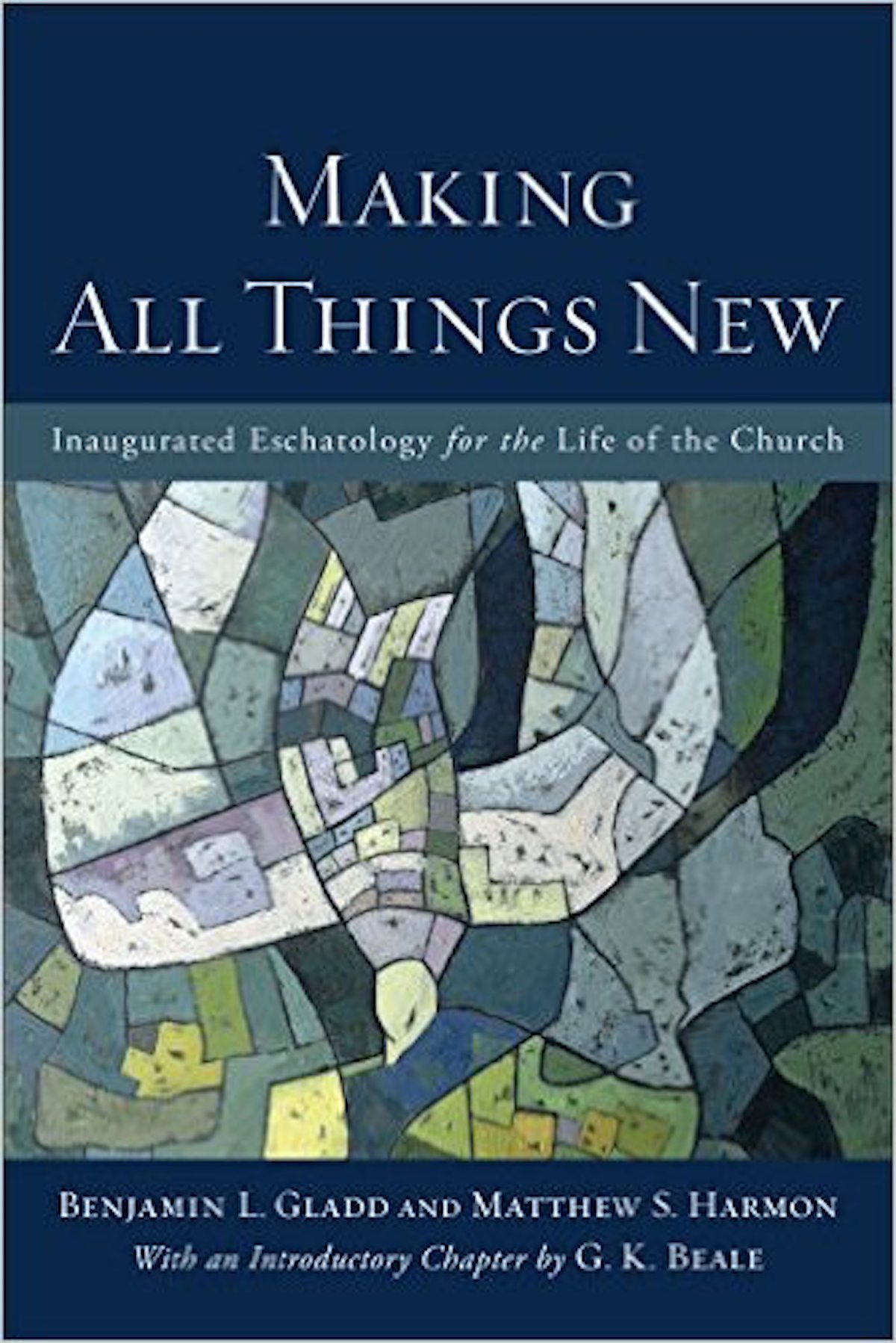 Making All Things New: Inaugurated Eschatology for the Life of the Church

Making All Things New: Inaugurated Eschatology for the Life of the Church

In Part III, Gladd and Harmon explore three facets of ministry within the end-time temple of God: worship (ch. 7), prayer (ch. 8), and missions (ch. 9). Corporate worship should reflect both the already and not yet, pattern itself after heavenly worship, and reflect participation in heavenly worship. Likewise, prayer should be eschatologically shaped by approaching God on the basis of what he has done in Christ and by asking him for what he’s promised to do. Last, God’s mission in the present time is carried out through his Spirit-indwelt people who proclaim the gospel and extend the boundaries of the eschatological temple by spreading God’s presence in the world. This task calls all Christians, regardless of their vocation, to be a light of salvation to the ends of the earth.

First, how “new” is the new covenant? The authors state that the new covenant in Jeremiah 31 is “not so much about the qualitative difference in the internalization of God’s law as it is about a democratization of the priestly and prophetic roles within the end-time community of faith” (22). But Jeremiah 31:33 seems to indicate otherwise, and Ezekiel 36:26 says God will give his new covenant people new hearts and new spirits within them, removing their hearts of stone and replacing them with hearts of flesh. Certainly there are continuities between the old and new covenants, but the new covenant is not like the covenant he made with their fathers that they broke (Jer. 31:32). This change reflects the qualitatively better work of Christ who secured a new covenant and an eternal redemption through his precious blood. As a result, all members of the new covenant are regenerate believers (i.e., new creations).

Second, did the Spirit’s coming merely “signal a more intense stage whereby God’s law is more deeply emblazoned on the heart” (52), or did his coming after Christ’s ascension create something new—namely, that he would not merely be with God’s new covenant people but in them (John 14:17)? Again, the Spirit’s work in the new covenant is tied to Christ’s work, which brings with it a new kind of Spirit-indwelt relation to those in Christ.

These questions aside, Gladd and Harmon have provided in Making All Things New an invaluable resource for understanding how God’s kingdom-breaking into the world in Christ inaugurates a new creation and, as a result, permeates every aspect of life and ministry. For example, they insightfully point out that living between the already-not yet affects how pastors shepherd their flocks in marriage and parenting. More specifically, a spouse or parent’s impatience could be rooted in a distorted eschatology; or the demand for perfection in a spouse or child could stem from an overrealized eschatology. Inaugurated eschatology guarantees progress without perfection until the perfect comes, so Christians can be confident in the process of change while being patient in awaiting it.

We can be grateful for this work that demonstrates how God’s eschatological purposes for the church and the world are both a present reality and also a future hope.

Oren Martin (PhD, The Southern Baptist Theological Seminary) serves as professor of theology at Boyce College in Louisville, Kentucky, and elder at Clifton Baptist Church. He is author of Bound for the Promised Land (IVP, 2015) in the New Studies in Biblical Theology series edited by Don Carson.