In the Apostles’ Creed, millions of Christians recite the confession, “I believe in God the Father Almighty, Maker of heaven and earth, and in his only Son Jesus, our Lord.” For centuries, Christians have identified Jesus by this title given him in the Scriptures: “Son of God.”

D. A. Carson’s latest book, Jesus the Son of God: A Christological Title Often Overlooked, Sometimes Misunderstood, and Currently Disputed, may have originated in a seminary lecture hall, but its subject strikes at the heart of a fiery global debate on the Christian mission frontier. How should Bible translators in predominately Muslim contexts render the term “Son of God”? Is the so-called Insider Movement an example of missiological sensitivity or overcontexualized carelessness? Organizations embroiled in the controversy include mission giants Wycliffe, SIL, and Frontiers. Such group have drawn the rebuke of entire denominations, including the Presbyterian Church in America (PCA) and the Assemblies of God (AG). Jesus the Son of God comes as a timely treatment of the exegetical issues informing a broad contemporary mission challenge.

Carson, research professor of New Testament at Trinity Evangelical Divinity School outside Chicago, writes the short treatise to foster clear thinking among Christians who want to know what we mean when we join believers across the centuries in confessing Jesus as God’s Son. But readers from the West may wonder how the subject of Jesus as the Son of God could become a point of controversy among evangelical mission organizations. While some may mistakenly identify the title as an unvaried standard, translators and other careful students of Scripture will recognize the breadth of the term and its meaning throughout the whole counsel of God’s Word.

Carson reminds the reader, “In Scripture we learn . . . that Adam is God’s son, Israel is God’s son, King Solomon is God’s son, the Israelites are sons of God, the peacemakers shall be called sons of God, and angels can be referred to as God’s sons.” Carson is sympathetic to a common perception among biblical scholars that some theologians neglect the diversity of biblical texts from which the title proceeds.

In three chapters, Carson builds his case from exegesis to Christian confession, with the final chapter devoted to wisely negotiating the current debate with Muslim idiom translations (MIT) in the mission context.

First, Carson explores “Son of God” as a Christological title rooted in the canon. He argues that many contemporary treatments explore the title within bounds of theology, history, or contemporary controversy but neglect what the biblical text actually says. He also explores the enormous list of passages where “son(s) of God” refers to beings other than Jesus, a fact often overlooked. 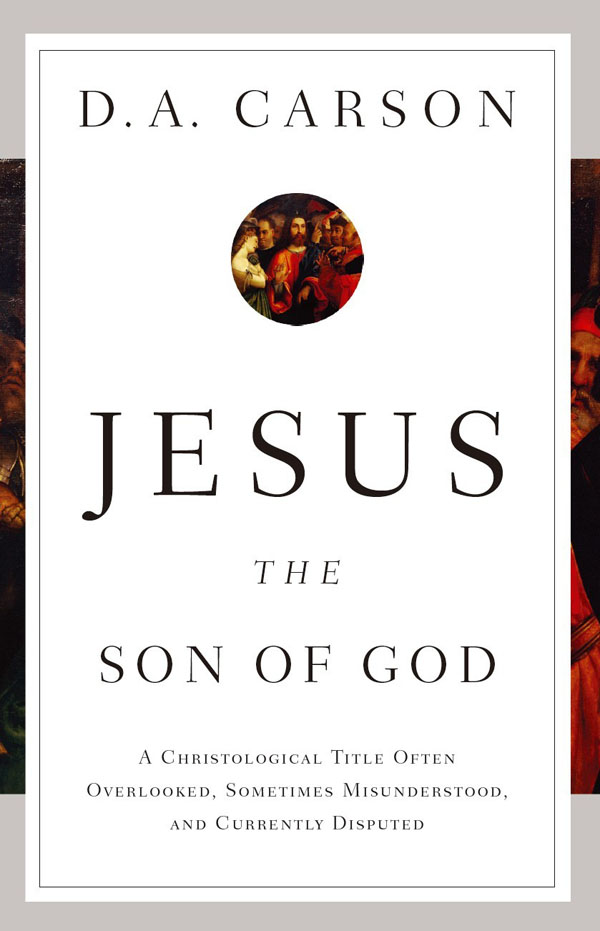 Although it is a foundational confession for all Christians, much of the theological significance of Jesus’s identity as “the Son of God” is often overlooked or misunderstood. Moreover, this Christological concept stands at the center of today’s Bible translation debates and increased ministry efforts to Muslims. New Testament scholar D. A. Carson sheds light on this important issue with his usual exegetical clarity and theological insight, first by broadly surveying Jesus’s biblical name as “the Son of God,” and then by focusing on two key texts that speak of Christ’s sonship.

Second, Carson evaluates key passages such as Hebrews 1 and John 5:16–30, where he demonstrates that Jesus uniquely possesses “all the prerogatives of God,” exposing some of the “exegetical pieces that would be forged into what would one day be called Trinitarianism.”

What bearing does this study of Jesus as the Son of God have on the way Christians should think about Jesus? Admitting not all uses of “Son of God” are the same, Carson concludes that “context must decide” each case and exhorts Bible readers to take “special pains not to succumb either to unjustified reductionism, in which one particular usage is read into every occurrence” (74).

Carson sees “Son of God” as a biblical trajectory, applied first to David, his sons, their successors, and ultimately fulfilled in Jesus. Carson cautions readers against imposing categories of systematic theology on every occurrence in the Old and New Testaments. Context matters, and Carson rightly identifies the twofold importance of wrestling with the meaning of each text and properly translating that meaning into each receptor culture.

Carson asks, “What bearing does this study of Jesus as the Son of God have on current debates regarding the translation of the title, especially in Muslim Contexts?” After an overview of C1–C6 Spectrum and the Insider Movement (IM), he briefly evaluates the controversy.

As translators labor with the challenge of new Bible translations, many have wondered what a faithful translation of the title “son of God” might be, especially in contexts where the term connotes physical offspring. Among Muslim cultures, the term ibn, “son of,” may connote the product of biological sexual relations, so the term ibnullah, “Son of God,” may suggest God produced offspring via a physical, sexual union with Mary—blasphemy to both Muslim and also Christian listeners.

Carson admits the relationship between exegesis and categories of systematic theology is not simple. At this point, Carson might have acknowledged the complexity missiologists and translators face in contexts vastly different than a culture so heavily influenced by centuries of Western tradition and interpretation.

Carson’s case throughout is peppered with acknowledgement that his work is brief and not comprehensive. He contends “more exegesis” and “careful integration” is needed to develop a comprehensive theology of the Son of God. His work, he admits, plunges ahead “somewhat prematurely,” though he hopes it will serve to prime “the pump of discussion.” The challenge in the current “discussion” is that both sides for some time displayed remarkable intransigence and continued entrenched in contentious gridlock.

Carson’s irenic treatment of the subject adds a brief and thoughful exploration of the textual details of Jesus’ title as Son of God. For such textual analysis and theological background on the subject, the reader would do well to begin with this small book. For the broader context of the currently disputed translation practices, however, the reader may want to seek sources dealing more analytically and primarily with the subject. Carson identifies cases made by Rick Brown, Andrea Gray, and Leith Gray, but his brief conclusions offer little space for analysis and limited interaction with the scores who have weighed in on both sides of the debate. Nevertheless, his work identifies many key elements associated with the theological richness of the key biblical affirmations of Jesus’ sonship.

Carson’s prolific pen has added another valuable volume to the shelf. May the conversations that proceed from its reading honor the Father in the unity of the Spirit and provoke the faithful pursuit of the Son’s command to spread of the gospel to every nation, tribe, language, and people until he appears.

Mark M. Overstreet serves as vice president at T4 Global, where he trains pastors, plants churches, and makes disciples among the poorest, hardest-to-reach people groups who have no access to the written Scriptures. You can follow him on Twitter.