Steven Lawson’s The Heroic Boldness of Martin Luther is the sixth installment in Reformation Trust’s Long Line of Godly Men Profiles. All but one of the books in the series have been written by Lawson, senior pastor of Christ Fellowship Baptist Church in Mobile, Alabama. Rather than a general biography of Luther’s life, this volume specifically focuses on his courage in preaching and how his example can help the church today. The six chapters address Luther’s life (chapter 1), convictions about Scripture (chapter 2), study habits (chapter 3), commitment to biblical exposition (chapter 4), pulpit delivery (chapter 5), and fearlessness in proclamation (chapter 6). The book’s great value is its ability to open a window into the power that drove Luther’s pulpit ministry. To read it is to catch a glimpse of Herman Melville’s quip in Moby Dick that the pulpit is the prow of the world.

Four Ways This Book Is Helpful

First, The Heroic Boldness of Martin Luther presents an inspiring portrait of Luther’s courage. Courage is such an important virtue for preachers and ministers, and Luther is a great model. As I read I found myself asking God to give me the steeliness of a Luther. I’m sure the book will affect many readers in this way. Through a battery of quotes, Lawson allows Luther’s voice to shine through the pages of the book. Here are some samples:

[The preacher] should not be silent or mumble, but testify without being frightened or bashful. He should speak out candidly without regarding or sparing anyone, let it strike whomever or whatever it will. . . . He should not hold a leaf in front of his mouth. (108)

Even if all the devils, the world, our neighbors, and our own people are hostile to us, revile and slander us, hurt and torment us, we should regard this as no different from applying a shovelful of manure to the vine to fertilize it, cutting away the useless wild branches, or removing a little of the excessive and hampering foliage. (109-110)

I can endure everything, but I cannot abandon the Holy Scriptures. (111)

I bear upon me the malice of the whole world, the hatred of the emperor, of the pope, and of all their retinue. Well, on in God’s name; seeing I am come into the fire, I will fight it out. (112)

So what was the secret to the German Reformer’s courage? Lawson’s quote of Spurgeon reveals that Luther’s courage in the pulpit paradoxically stemmed from his reverence for the pulpit: “I believe Martin Luther would have faced the infernal fiend himself without a fear; and yet we have his own confession that his knees often knocked together when he stood up to preach” (99). Luther could stand, like Athanasius, contra mundum (against the world) because he knew when he preached the Word faithfully, he was standing with God. His example reminds us that not fearing people ultimately stems from first fearing God. 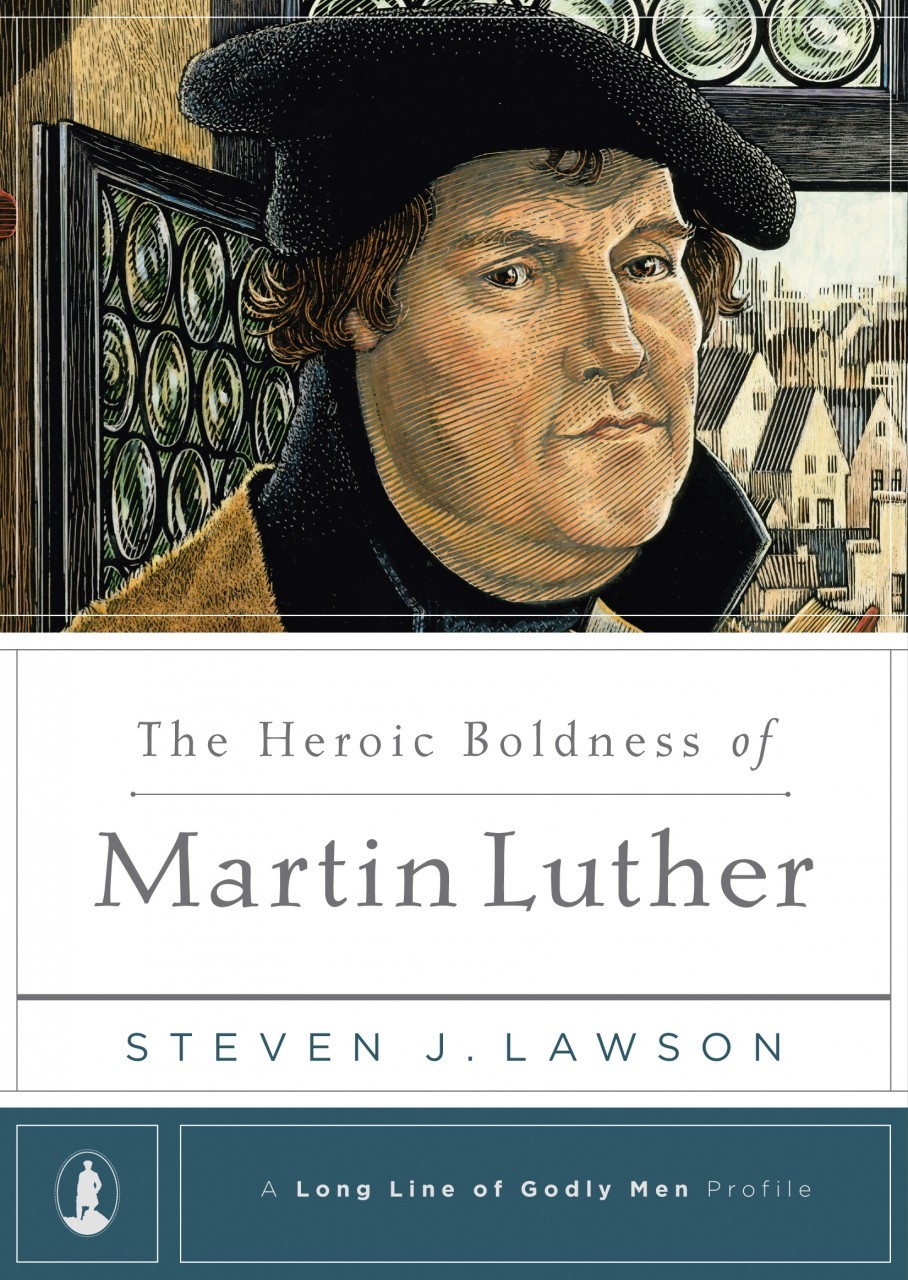 The Heroic Boldness of Martin Luther

The Heroic Boldness of Martin Luther

Second, Lawson reveals Luther’s exalted view of preaching. Luther insisted that when a preacher faithfully declares the gospel, the voice of God himself rings out: “When burgher or peasant hears a pastor, he must say: ‘I do indeed hear and recognize the voice of the pastor. But the words which he utters are not his. No, he would be incapable of them. It is the sublime majesty of God that is speaking through him’” (29-30). For Luther, faithful preaching not only exposits God’s Word but, in a sense, is God’s Word. Luther therefore counseled preachers: “In all simplicity seek only God’s glory and not the applause of men. And pray that God will put wisdom into your mouth and give your hearers a ready ear; then leave it God. For you must believe me, preaching is not the work of men” (97). Luther’s vision of preaching can encourage those of us who regularly hear sermons to regard the One ultimately addressing us. And it can lift up preachers into the height and magnificence and nobility and honor of their divine calling.

Third, Lawson also lets Luther drive preachers to conscious, prayerful Spirit-dependence in their sermon preparation. Indeed, Luther considered biblical study to be a fundamentally spiritual activity. For Luther, this conviction had significant implications for how preachers should approach their study of the Bible, especially in sermon preparation: “The Holy Writ wants to be dealt with in fear and humility and penetrated more by studying with pious prayer than with keenness of intellect” (46). This emphasis is all the more striking in light of Luther’s similarly strong emphasis on technical proficiency in handling the Scriptures (for example, his insistence on the importance of studying the original languages). Luther’s example reminds us that before we enter the pulpit, we must labor in both study and prayer, using both our brains and our knees.

Fourth, Lawson highlights Luther’s conviction about the importance of plainness of speech and style in the pulpit. “He who teaches most simply, childishly, popularly,” Luther observed, “that is the best preacher. I like it to be easy and earthy. But now if it is a debate you are looking for, come into my classroom! I will give it to you plenty sharp and you will get your answer however fancy your question” (93). Luther valued plain speech because he believed God’s Word is for all people and thought biblical preaching should cut against the grain of the world’s idolatrous values. “When I preach,” he remarked, “I regard neither doctors nor masters, [but] I have an eye for the multitude of young people, children, and servants, of which there are more than two thousand. I preach to them” (91). Luther’s example on this point reminds preachers there’s no room for pomp and pretense in the pulpit. Human pride and distinction are as barren there as they are before God himself.

Two Ways This Book Could Be Strengthened

There are a couple of ways The Heroic Boldness of Martin Luther could be strengthened, though they by no means nullify its value. First, the book is heavy on description and light on argumentation. Many paragraphs simply reproduce Luther quotes and facts without any adjudication between possible interpretations of them. Moreover, many of the evaluations of Luther’s significance are merely stated, not demonstrated. If Lawson had displayed greater interest in establishing his view of Luther, especially to those not already sympathetic to it, I feel he could reach a wider audience. For example, from Luther’s life Lawson draws principles like “as the pulpit goes, so goes the church” (41) and “to reform the pulpit is to reform the church” (120). Though I sympathize with Lawson on this point, he doesn’t make any effort to justify this claim; therefore, it’s unlikely to be compelling to readers coming from a non-Reformed background where expository preaching isn’t so singularly valued. Lawson also argues Luther believed in biblical inerrancy (31-33), but doesn’t acknowledge potential counterevidence in Luther’s commentaries or statements about the Book of James or nuances inherent in the definition of inerrancy. Consequently, I’m not sure his comments on this point will advance discussion.

Second, from reading this book one wouldn’t learn Luther had any foibles or flaws. Lawson commends Luther’s boldness of speech, for instance, including his colorful language and biting sarcasm (93), but fails to demonstrate sensitivity to the potential weaknesses in this personality trait. (Thus there’s no mention of his apparently anti-Semitic statements in later life.) This concern touches not merely on historical accuracy but also (in light of Lawson’s admirable concern for contemporary application) the overall effect of the book on its readers. I wonder if younger preachers reading this book, for example, could have benefited from an exhortation not merely to the courage and boldness Luther exemplified but also to the humility and circumspection he occasionally lacked. If Lawson’s book had exhibited sensitivity to the great Reformer’s fallenness, it wouldn’t have diminished the value of learning from him; it would only have enabled us to appreciate him in the shadow of the ultimate Reformer, Jesus Christ. Surely Luther himself would have wanted nothing less.

Nevertheless, Lawson’s work is an edifying read. In its pages, Luther’s voice rings out to continue to awaken and invigorate the church, as it has done so often in the past.