The stream of books criticizing the idea that Christ saves us by being punished in our place (i.e., penal substitution) is relentless. A new one seems to hits the shelves every month. Into this crowded market comes Healing the Gospel: A Radical Vision for Grace, Justice, and the Cross by artist Derek Flood, a featured blogger for The Huffington Post and Sojourners. What sets this particular critique apart from other such studies are its size (it’s short) and its thesis. That thesis, in brief, is “restoration triumphs over retribution”—purportedly “the central narrative of the New Testament” (58). In other words, Flood doesn’t just argue that penal substitution is wrong, misguided, or unbiblical (though he claims all that); he argues that it’s antithetical to the true gospel because it promotes the very thing God saves us from—retributive justice. This explains the book’s title, which is not The Healing Gospel, as I kept wanting to read it, but rather Healing the Gospel.

Retributive justice, as Flood sees it, is deeply harmful. It leads to a battery of heinous ills such as “beating children, torturing prisoners and heretics, etc.” and culminates in even more destructive views of God and ourselves (8). Believers and unbelievers alike are affected. Unbelievers wonder how being saved by a vindictive God could be good news, and believers suffer a crippling sense of self-loathing. The result is a “faith motivated by fear, threat, and feelings of worthlessness” (3). As if that’s not enough, theologians who espouse penal substitution “quite literally place God in the biblical role of Satan, the Accuser” (46). Certainly no one can fault this author for understatement!

The way out of this mire of self-flagellation is to provide a “restorative model of salvation . . . that exposes and overturns the fallen way of punitive justice” (52). The centerpieces for this “restorative model” are the incarnation and resurrection, or what Flood calls “the two acts of God” (79–81). Because Christ identified with us in our brokenness, pain, and suffering (incarnation), we can participate with him in his victory over sin and death (resurrection).

What, then, can be said for Flood’s attempt to save us from penal substitution? In many ways, Flood’s view is susceptible to some, though not all, of the limitations in Christus Victor and Christus Exemplar views of the atonement. But since others have dealt with those problems elsewhere (see Millard Erickson’s Christian Theology, 2nd ed., 798–817), I want to focus my attention on other concerns.

First, there are a number of false choices presented throughout the argument. We are told that divine justice is restorative, not retributive (ch. 2); that sin is a disease, not a crime (ch. 3); and that Christ’s death is about participation, not substitution (ch. 7). In each case, Flood presents a conflict where Scripture doesn’t. To take one example, it hardly follows that since Paul speaks of us dying “with Christ,” he therefore can’t also speak of Christ dying “instead of us.” Happily, we don’t have to make these choices. 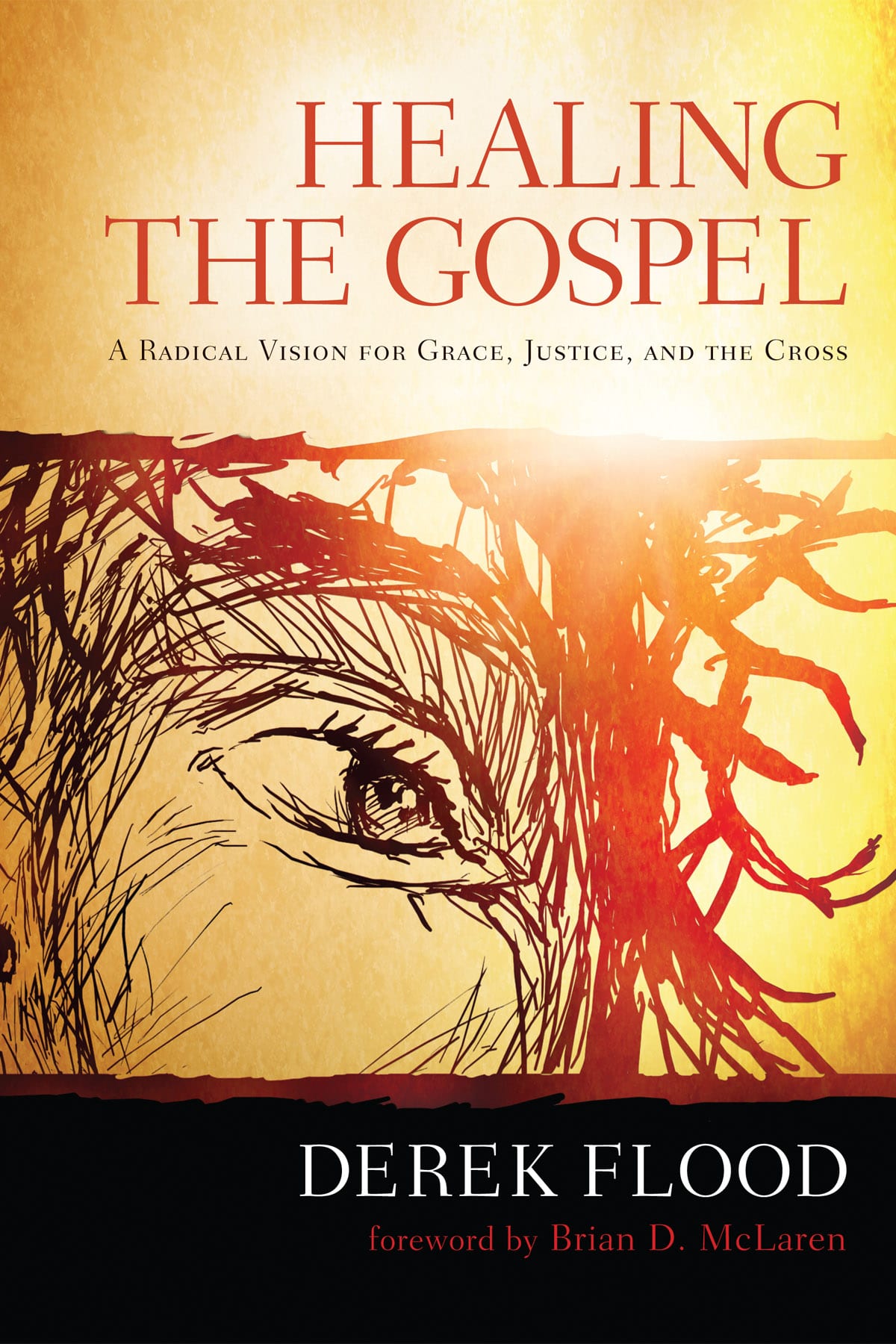 Healing the Gospel: A Radical Vision for Grace, Justice, and the Cross

Healing the Gospel: A Radical Vision for Grace, Justice, and the Cross

Connecting our own experiences of faith with the New Testament narrative, author Derek Flood shows us an understanding of the cross that not only reveals God’s heart of grace, but also models our own way of Christ-like love. It’s a vision of the gospel that exposes violence, rather than supporting it-a gospel rooted in love of enemies, rather than retribution. The result is a nonviolent understanding of the atonement that is not only thoroughly biblical, but will help people struggling with their faith to encounter grace.

Second, Flood argues that penal substitution is a “legal fiction” that does nothing to transform either the criminal or the victim (24). Perhaps some see in penal substitution a free pass for sinning, but this has certainly not been true in my experience. More often I have seen the unique ability of penal substitution to both strengthen the weak (because God takes their bruises seriously) and also humble the proud (because they, too, deserve Christ’s fate). Far from creating sullen navel-gazers, penal substitution creates a people whose strength comes from knowing their sin and knowing their Savior. As John Newton wrote, “while his death my sin displays in all its blackest hue, such is the mystery of grace, it seals my pardon too.”

Third, although I commend the author for addressing key texts, I found many of his interpretations untenable. Romans 3:21–26 is a case in point. Flood tries to read the passage as subverting retributive justice, but it just doesn’t work. In Romans 3:25, for instance, God’s “justice” needs demonstration, not because God left previous sinners unrestored, but because he left their sins unpunished. Worse still is the next verse, which becomes a limp tautology on Flood’s reading: God’s reason for presenting Christ as a sacrifice of atonement would be “so that he might be restorative and the one who restores.” Read with care, this text teaches the very principle Flood argues it subverts: that God is just in justifying believers because their sins have been punished in Christ. Similar problems attend Flood’s readings of Romans 4:5, Romans 8:1–3, and 2 Corinthians 5:21.

Just as troubling are the passages that Flood must ignore in order to cleanse the New Testament of all retributive justice. The Scripture index shows no citation of passages like Matthew 18:23–35, Romans 12:19, 2 Thessalonians 1:6, or 1 Peter 2:23, which all depend, to one degree or another, on God’s rightful use of retributive justice. Most conspicuous by its absence is Revelation, a book that some have simply given up trying to square with their rejection of retribution. But it simply won’t go away. The saints in Revelation 6:10 weren’t out of town the Sunday their pastor preached about God’s subversion of retributive justice.

The Problem Behind the Problems

Behind all these problems looms a more serious problem, one that’s fatal to Flood’s whole project. Throughout the book I kept asking myself, What am I missing? On the one hand, I can certainly see how easily retribution snowballs into a vicious cycle of revenge. And I, too, think that Christ excludes all personal vengeance in the Sermon on the Mount. Even so, I couldn’t understand how a right rejection of personal vengeance could so dramatically turn into a sustained and passionate rejection of God’s just punishment of sin. How does this work?

The answer, I think, lies in a deficient understanding of sin. Flood rightly says we are enslaved to sin and even sick with it. But not once does he angle his definition of sin vertically. He does not mention that the first commandment is always the first to be broken. He does not follow Joseph or David’s concern that sin is fundamentally against God (Gen. 39:10; Ps. 51:4). And despite Flood’s focus on Romans, he does not tells us that idolatry is the lead-off sin in Paul’s case against the Gentiles. Sin as idolatry is completely missing.

And what does all this have to do with Flood’s impassioned rejection of penal substitution? Without a robust theology of idolatry, God will always look petty for requiring penal satisfaction for sin. After all, can God really expect us to forgive our enemies without punishment when he punishes his creatures? If we understand idolatry, we know he can. Because he is God, he has never had to forgive as a sinner. He has never tried to punish a crime he has committed. But we have. And he has never trivialized the forgiveness he’s received. But we have. Because we are not God, our forgiveness must look different from his in some fundamental ways. This is precisely because he is God and we are not.

It turns out that Flood’s deep suspicion of retribution is consistent with his view of sin. Ironically, he misses the most powerful motivation the Bible actually gives for repudiating personal vengeance: we are not God (Rom. 12:19; 1 Pet. 2:23).

Because Flood provides no antidote to our idolatry, his cure turns out to be worse than his diagnosis. Much better to know that in Christ God has not only cured our idol-loving hearts, but he has publicly punished them, too. After all, one of the sure glories of penal substitution is the powerful reminder that God is the rightful Judge, and we are not.

Peter Gurry (PhD, Cambridge) is assistant professor of New Testament and Co-Director of the Text & Canon Institute at Phoenix Seminary. He blogs at Evangelical Textual Criticism and attends Whitton Avenue Bible Church in Phoenix with his family.