God Dwells Among Us: Expanding Eden to the Ends of the Earth found its genesis in Greg Beale’s earlier book The Temple and the Church’s Mission (IVP Academic, 2004). Within that volume, Beale (professor of New Testament and biblical theology at Westminster Theological Seminary in Philadelphia) provided a rigorous and compelling treatment of the biblical themes of tabernacle and temple. Mitchell Kim (lead pastor of Living Water Alliance Church outside Chicago) later developed Beale’s rich theological argument into a seven-part sermon series, which he condensed yet further into a conference seminar.

God Dwells Among Us converts these sermons back into a more expanded written format, interspersed with material from the original book. The result is a work that has the pedagogical focus and practical force of a sermon series while displaying theological depth any interested reader should find rewarding and, at various points, even exhilarating.

God Dwells Among Us follows the thread of the biblical narrative, from the creation of the world in Genesis 1–2 to the consummation of the new heavens and new earth in Revelation 21–22. It begins in Eden, which the authors argue is presented as a divine sanctuary where God dwells among his people. It is his purpose that, from Eden, his presence should be extended to the ends of the world. Humanity’s priestly task within Eden—a task at which they failed—was to keep guard over the garden by obeying God’s word. 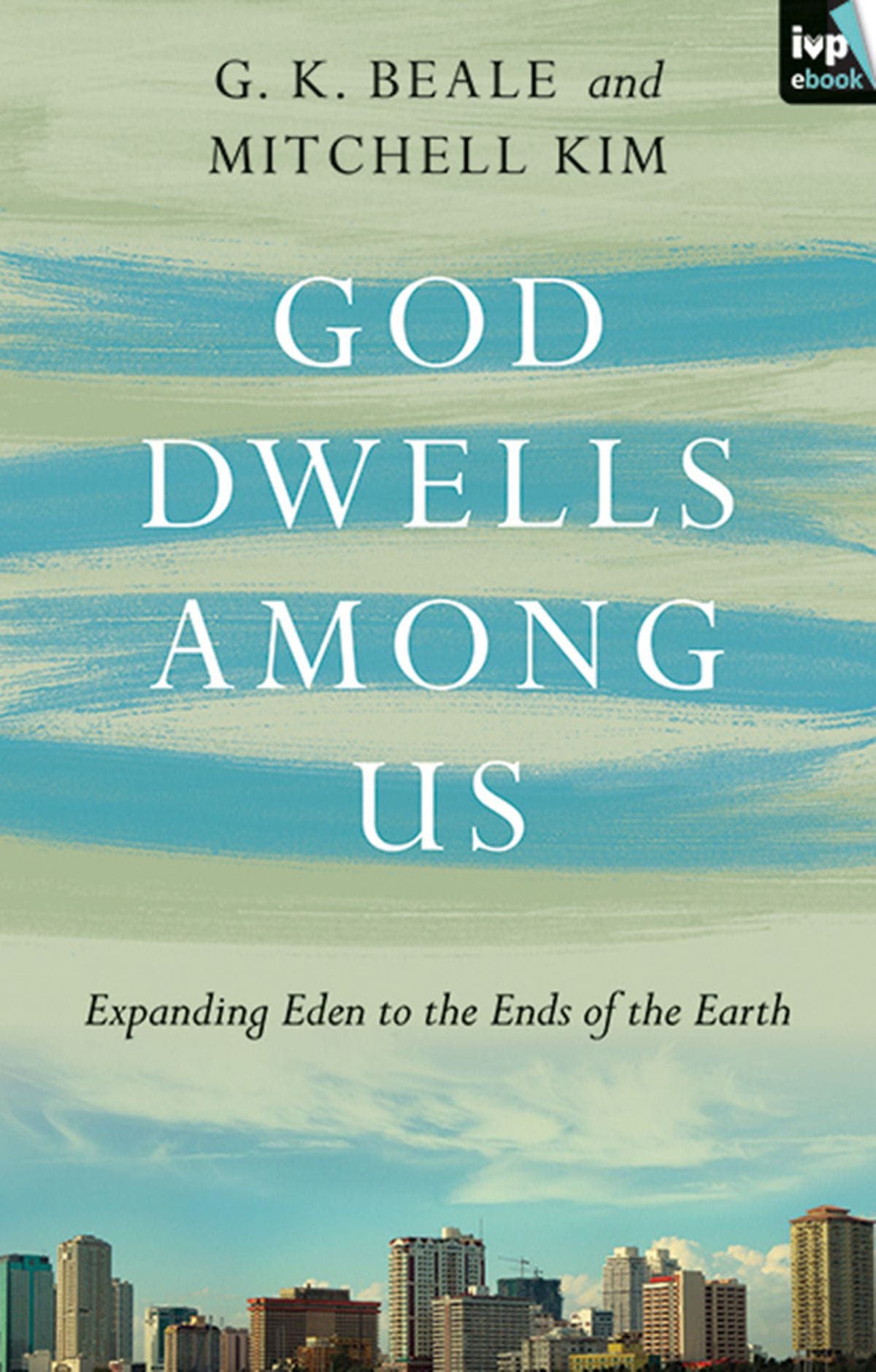 God Dwells Among Us: Expanding Eden to the Ends of the Earth

God Dwells Among Us: Expanding Eden to the Ends of the Earth

In the second chapter, Beale and Kim present the commission given to humanity in Genesis 1:26–28 as a commission to expand Eden. This mission finds its source and its telos in worship. After all, in worship we most reflect God’s image, and worship propels our mission. And this mission leads to the multiplication of those who reflect and worship God’s glory, spreading worship to the ends of the earth. This connection between worship and mission is a central claim within the book’s broader argument.

Beale and Kim trace God’s commitment to his original purpose for his creation and calling to humanity through the story of the Old Testament (OT). The tabernacle is “Eden remixed” (51). It is also a miniature model of the cosmos God created, not unlike an architect’s scale model of his projected masterpiece. In the tabernacle God bestowed his presence to his people, while making provision for the sin that separated them from him. The prophets foretold God’s future restoration and expansion of Eden, raising it to a level of glory that would eclipse even the original creation.

In the New Testament (NT) a surprising twist is introduced to the development of this theme, as the Gospels present Jesus as the new temple, the temple cornerstone, and the messianic builder of the temple. He declares judgment on the temple of Jerusalem, tearing its curtain in his death. And through his death and resurrection, he inaugurates a new order and sets in motion the fulfillment of God’s original purpose.

The church is now the place where God’s great end-time purposes come to realization. We are a strange form of “organic” building, which grows much like a physical body. (Beale and Kim’s stimulating discussion of the theme of growth in relation to the temple was one of many exegetical highlights for me.) Our ministry as Christians within the church is a priestly one, developing out of the work of the priests in the OT. We offer up the “sacrifice of witness” (121), declaring Christ’s redemptive work to the nations to bring them to salvation. Strength in this witness—which is integral to our priestly vocation—comes as we spend time in the presence of God. The end of Revelation presents us with the consummation of God’s purpose in the new heavens and new earth, as his temple expands to fill all.

Beale and Kim discuss the “blinders” that have prevented many from seeing the importance and scope of these themes on account of a more materialistic cosmology, a limited appreciation of biblical unity, a lack of understanding of biblical typology, and a failure to see beyond “literal” fulfilment. God Dwells Among Us concludes on a challenging practical and applicatory note, highlighting the importance of obedience to God’s Word, commitment to prayer, and the practice of sacrifice in our priestly vocation. They write, “The mark of the true church is an expanding witness to the presence of God in the invisible temple: to our families, the church, our neighborhood, city, country, and ultimately the whole earth” (165).

This book presents a fundamental biblical theme in a manner that ably conveys the redemptive-historical impetus of the scriptural narrative. It paints a big picture, yet there are scintillating moments of close exegesis throughout. There are also many points at which it displays the widely underrealized potential of rich redemptive historical preaching powerfully addressed to a contemporary context.

There were a couple of points I was disappointed the volume didn’t develop further. Although the first couple of chapters dealt with Genesis 1–2 and the wider cosmos was compared to a creation at various points, I would have appreciated closer attention given to the relationship between the creation of the cosmos as a temple (Gen. 1) and the establishment of Eden as a divine sanctuary (Gen. 2). An exploration of this relationship would have strengthened the argument of the book (as it strengthens the argument for the complementarity of the first two chapters of Genesis). It also would have helped to clarify the relationship between God’s creative work and humanity’s creative work as his subordinate co-creators.

Beale and Kim’s discussion of temple themes in the Gospels and epistles was rich fare that will whet readers’ appetites for more. However, their failure to discuss temple themes in relation to the incarnation in anything more than a cursory manner was, to say the least, rather surprising. This failure limited the book’s capacity to do justice to the NT’s temple Christology, or to reveal the degree to which their theme can illumine many traditional discussions in the area of Christology and ecclesiology.

I was quite unconvinced at many points by Beale and Kim’s handling of biblical categories such as priesthood and sacrifice. The biblical warrant for the connection they draw between priesthood and witness to the wider world (e.g., 132–134) seems especially tenuous, and their case for such an important plank in their argument was weak. At such points, one might wonder whether they are trying to get the category of the priest to fulfill the role that more properly belongs to the prophet (the role of the priest is never adequately defined within the book). A more extensive discussion of the role of king and prophet, for instance, wouldn’t need to come at the expense of the centrality of the temple motif. Kings are the builders of temples, according to the plans provided by prophets; the temple is the royal palace of God, the prophet is the member of his council, the priest is his household servant, and the king is his vice-regent.

These concerns notwithstanding, God Dwells Among Us is a book I can warmly recommend, especially to pastors. Unfortunately, although it is more accessible to a non-academic audience than The Temple and the Church’s Mission, it may not be sufficiently so for many in the pews. Its use of some material directly taken from that earlier book left me with the occasional sense of its being pitched at an uneven level, with many of the more exegetical passages presupposing much greater familiarity with biblical and exegetical argumentation than the applicatory passages.

I hope I’m wrong in this impression: Beale and Kim’s treatment of the biblical theme of the temple is a key that can unlock a wonderful scriptural treasury, and it would be a pity if their insight were not widely enjoyed.

Alastair Roberts (PhD, Durham University in England) works for both the Theopolis Institute the Davenant Institute. He participates in the Mere Fidelity and Theopolis podcasts, blogs at Alastair’s Adversaria, and tweets at @zugzwanged.