While pursuing his career-long interest in the Mongol kingdoms and Genghis Khan (1162–1229), Jack Weatherford stumbled across a potential bridge from Khan to his native South Carolina. Given Weatherford’s expertise in anthropology and dedication to his topic, the idea of an even tangential personal or idealized connection to Khan was something he couldn’t let rest. Intriguingly, that connection comes through an approach to religious freedom purportedly shared by the world’s most accomplished conqueror of the 13th century and the 18th century’s founders of the world’s most powerful nation.

Weatherford is an admirable Indiana Jones-like figure—a scholar-turned-quest-seeker who splits his time between quaint Charleston and the hinterlands of Mongolia. Following the publication of his 2004 bestseller, Genghis Khan and the Making of the Modern World—a volume that upends various impugning assessments of Khan—Weatherford returned to his subject to pull at the thread of religious freedom. The result is Genghis Khan and the Quest for God: How the World’s Greatest Conqueror Gave Us Religious Freedom.

Pluralism as a Path to Peace

Weatherford begins by telling the story of his discoveries and admitting he’s putting forward his theory “tentatively” (xxiii). The potential connection involves a short statement by British historian Edward Gibbon in 1787. Gibbon perceived a link between Khan’s views of religious laws and John Locke’s work on documents formative for the governance of the Carolinas (xvii). While Weatherford couldn’t substantiate this claim, it spurred him to ask whether George Washington, Benjamin Franklin, or Thomas Jefferson knew of Khan’s thinking, since “the most popular book in the American colonies in the 18th century” was a 1710 biography of Khan written by a French scholar. As it turns out, Washington owned the book, Franklin popularized it, and Jefferson gave it out as a gift. Thus Weatherford attempts to show similarity in spirit and letter between Khan’s work on religious freedom and Jefferson’s Virginia Statute for Religious Freedom in 1777 (xx–xxi).

Weatherford uses the fascinating primary source The Secret History of the Mongols, written and encoded two years after Khan’s death, lost until the 19th century, and only decoded in the 20th (9–10). Weatherford’s carefulness to prioritize the value of the Secret History helps the reader to trust the sincerity of his claims and conclusions.

Genghis Khan and the Quest for God tells the story of Khan’s life from childhood forward, shedding light on his views toward the religions of those he conquered. Even though the conquests aren’t the focus of the work, the clearly annihilative and barbaric aspects of Khan’s expanding kingdom are downplayed and not suitably reconciled with Weatherford’s picture of a noble statesman. In the end, Weatherford’s portrait of Khan grows with admiration as Khan concludes that no one religion “guaranteed exclusive access to the right way” (267). Rather, Khan contends the best approach is to learn from them all and to embrace a principle of universalism. In this sense, the value of Khan’s approach for Weatherford appears to be not so much the virtues of religious freedom in a society—where the state doesn’t seek to rule over the soul and conscience—but rather the advocacy of a more relativized pluralism as the way to peace.

Connecting Khan to the Present

Weatherford divides Genghis Khan and the Quest for God into five parts, a chronological format that allows him to tell Khan’s captivating life story. By the end of Khan’s life he had conquered “more lands and peoples than all the emperors in the entire history of the Roman empire,” and he did it with just 100,000 men (2–3). Interestingly, he had one Christian wife and “favored Christian spouses for his children and deliberately chose them because he thought they would make good parents for his grandchildren” (103). 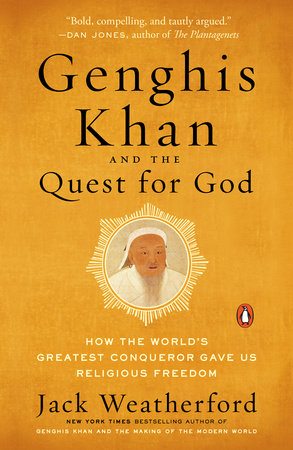 Genghis Khan and the Quest for God: How the World’s Greatest Conqueror Gave Us Religious Freedom

Genghis Khan and the Quest for God: How the World’s Greatest Conqueror Gave Us Religious Freedom

In the concluding chapters, Weatherford returns to his aim to connect Khan to the present. He attempts to show that Dante might’ve had Khan in mind as his foil for a future world king, and that Chaucer saw Khan as someone who was “just to everyone” (327). Voltaire, in an essay on religious toleration, cites the Mongols as an example of a society that practiced religious freedom, and Weatherford tries again to stretch this to John Locke and so connect Khan to South Carolina by proxy.

When it comes to Weatherford’s stronger Jefferson connection via the French biography, he concedes that John Adams “remained critical of the excessive praise heaped on Genghis Khan” and told Jefferson that conquest is always bad and that Khan “destroyed millions of lives” (391). Jefferson still could’ve been influenced by Khan’s story, but Weatherford fails to prove that the French biography Jefferson read gave birth to the American understanding of religious freedom.

While Genghis Khan never sought divine or even godlike status during his reign, Weatherford notes that after Khan’s death his followers exalted and sought to emulate him. Regrettably, this hero worship is something Weatherford himself appears to repeat. The concluding paragraphs of the book recount how many still believe that Khan had divine power and will one day return as a god—a notion Weatherford himself indicates is his own hope (356).

Therefore, despite the compelling biography, the quest to make Genghis Khan the giver of religious freedom is a stretch too far—even a bit too strange.

​Jason G. Duesing is provost and associate professor of historical theology at Midwestern Baptist Theological Seminary in Kansas City, Missouri. He is the co-editor and author of First Freedom: The Beginning and End of Religious Liberty (B&H Academic, 2016). You can follow him on Twitter or at JGDuesing.com.

3 How to Move from Grumbling to Gratitude

4 Think About Such Things: Whatever Is True