If one frequents the annual gatherings of the Evangelical Theological Society (ETS), one might easily conclude that rumors of a “crisis” regarding biblical inerrancy are unfounded. After all, the society’s annual conference regularly draws in excess of 2,100 attendees, and aggregate society membership is steadily increasing. Yet such figures don’t tell us everything. On the one hand, there are persons who still affirm ETS’s commitment to inerrancy but now attend alternate conventions; on the other there are those who once supported the doctrinal basis of the Society but no longer do so. A session at the 2013 ETS convention in Baltimore, reflecting Five Views on Biblical Inerrancy’s release, highlighted the existence of this spectrum.

That “wide angle” reality is highlighted in this important addition to the Zondervan Counterpoints series. Two contributors, Albert Mohler of The Southern Baptist Theological Seminary and Kevin Vanhoozer of Trinity Evangelical Divinity School, affirm the doctrine of inerrancy in quite different ways. Another, Michael Bird of Melbourne, Australia, opposes the terminology of inerrancy while maintaining the largely overlapping conception of infallibility. Peter Enns, a former inerrantist, seeks to end the “domain” of this theological term as he judges it unsustainable in light of biblical difficulties, while John Franke, now a post-conservative evangelical, is willing to go on using the word provided that he may define it on his own terms. Each of the five contributors must supply a chapter and then weather the critique of four co-contributors.

I found it useful to remember that the five contributors, while certainly not all on the same page as to inerrancy, are at the same time writers vying for the attention of the same broadly evangelical readership. Several release books from the same publishers. Does this mean that some, whose views cross the boundaries of evangelical belief, are set on subversion through this volume? I think not; their hope instead is that the broadly evangelical American public—which takes Scripture and theology quite seriously—will, in time come around to see it their way. Thus, while this book viewed narrowly is about the veracity of the Bible, it is in this broader context a kind of “proxy struggle” for the future of evangelicalism. What will that look like, vis-à-vis the Bible?

For Mohler, future evangelicalism’s views on the Bible ought to be essentially what they have been across the 19th and 20th centuries. What he terms the “classic” understanding of inspiration and inerrancy finds articulation in the doctrinal basis of ETS (1949) and elaboration in the Chicago Statement on Biblical Inerrancy (1978). In a manner first popularized in the first half of the 19th century, Mohler argues for an inspiration process in which the individual words of Scripture were furnished by an “oracular” process that ensured the various genres of biblical literature were, in the end, like so many prophetic utterances. Mohler may term this approach to inspiration “classic,” but it was never the only robust evangelical understanding put forward ensuring a Bible without error. Since the late E. F. Harrison’s important 1959 essay, “The Phenomena of Scripture,” this 19th-century approach to inspiration and inerrancy has been served with reminders that it is more necessary to observe how our admittedly inspired Bible “behaves.” 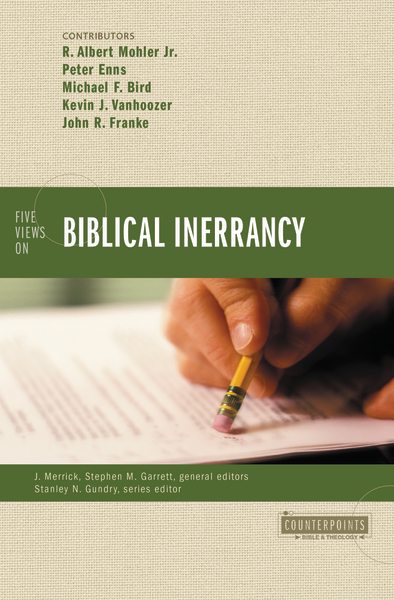 In fact, this is the bracing message put forward by Enns. If Mohler’s articulation of inspiration and inerrancy is heavily indebted to viewpoints given notable articulation in the early 19th century, Enns’s approach has learned to content itself with affirming only what may be circumspectly stated about the biblical narrative after the academy of biblical archaeologists and scholars have done their work. According to their often “minimalist” approach, whole portions of the Old Testament have minimal theological value inasmuch as their historical accuracy is discredited. Enns’s approach is more than generous toward such claims; it is plainly concessive. He isn’t concerned even to contend for the “essential” historicity or accuracy of such Scriptures. Yet, for the purposes of this Counterpoint exchange, Enns’s views provide the recurrent sobering reminder that those who contend for the inerrancy or infallibility of Scripture cannot shirk the extensive scholarly consensus that tend to make discussions of scriptural veracity pointless. I take Enns’s point that his four co-contributors have not addressed this question adequately.

The path trod by Bird was partly blazed for him by his former colleague Andrew McGowan in The Divine Authenticity of Scripture (InterVarsity, 2007). Both authors contend that the time-honored language of “infallibility” applied to Scripture was and is adequate for elaborating what evangelical Christians mean when they speak of biblical veracity. True as this may be, neither of these authors acknowledge that well before the heyday of the Princeton theology, which they credit with giving articulation to the modern evangelical doctrine of inerrancy, British Reformed theology was happy to affirm that inspired Scripture, possessing infallible authority, was also without error. The thrust of their collective argumentation that inerrancy is a doctrine “made in the USA” is based on ignoring historical sources available to them. Bird extends this argument further, however, by claiming that North American statements of inerrancy in 1949 and 1978 have “foisted” on the global evangelical movement an alien terminology. This is an interesting, though overblown, argument. I see growing numbers of Southeast Asians, Australians, New Zealanders, Scandinavians, and Brits present in sessions of the ETS. Evidently, there are global evangelicals who take no umbrage at this “alien” terminology. Some of these could as readily charge that “infallibility” was an alien term. Who, present at the founding of ETS in 1949, would ever have dreamed that this complaint of North American hegemony would arise from such a humble beginning? That said, I do agree with Bird that the Chicago gathering of 1978 was ill-advised to claim for their gathering the adjective “international.”

Readers will take special interest in the efforts of Vanhoozer to articulate what he calls a “well-versed” approach to inerrancy. This terminology is Vanhoozer’s means of indicating there are conservative approaches to inerrancy that, however well-intentioned, are inadequate. He’s entitled to be this painstaking, for while he’s taught at both Wheaton College and Trinity Evangelical Divinity School he previously taught dogmatics at the University of Edinburgh. Working in a research university provided Vanhoozer with a context in which to articulate an inerrancy doctrine in the face of the kind of academic opinion that had such a formative influence on Enns. Some readers will find his insistence that inerrancy pertains to what Scripture affirms to be true to be selective and unduly narrow. I found it interesting that Enns, in responding to the Vanhoozer essay, found in it numerous features to admire. Most notable was Vanhoozer’s comparison of a concept of “inerrancy of glory” with an “inerrancy of the cross”; only the latter retains the proper element of humility in light of biblical difficulties.

Franke’s essay, written from a post-conservative stance, is an interesting read. He accepts an inspiration and inerrancy (if he may define it) of the various components of the biblical canon. But Franke perplexes as often as he pleases. His insistence that past theological formulations—whether about inspiration and inerrancy or other doctrines—have tended to “privilege” certain biblical texts at the expense of others is suggestive and thought-provoking. Yet this approach, innocent-sounding as it may appear, is in truth self-referential and destabilizing. Not only the evangelical doctrine of biblical inspiration but all preceding doctrinal formulations (including the ecumenical creeds) are under suspicion; they now await the Rubik’s cube-like efforts of Franke’s recalibration. Perhaps Franke’s career as a dogmatician is over; he must either turn biblical theologian or leave off theologizing.

What does this “proxy-struggle” for the future of evangelicalism tell us? That there’s a huge overlap of theological concern in the constituencies respresented by Mohler, Bird, and Vanhoozer and that it provides the basis for more efforts at coming to sing in the same key. And should the perspective of Enns plays no further role, he will still have performed the valuable service of reminding evangelicals that their Scriptures’ historical value is contested at more places than they often acknowledge.