In fall 2013, Mark Driscoll made headlines when he parked a hearse in front of an old Seattle church to promote his book A Call to Resurgence, which declared the death of Christianity in the United States. Little did he know he’d taken a page from the annals of fundamentalism.

In 1967, Carl McIntire made a similar declaration, with a hearse, in his book The Death of a Church. Markku Ruotsila’s new book Fighting Fundamentalist: Carl McIntire and the Politicization of American Fundamentalism (2015) offers a scholarly account of the life and impact of the man Christianity Today once called the “P. T. Barnum of Fundamentalism.” Ruotsila—who teaches American church history at the University of Helsinki in Finland—argues that more than a showman, Carl McIntire should be considered the founding father of the modern Religious Right.

To prove his thesis, Ruotsila provides a narrative of McIntire’s life from his upbringing in 1910s rural Oklahoma to his death in 2002. He demonstrates how McIntire’s early years affected his strong politically conservative beliefs; his disdain for socialism and communism came at an early age in progressive rural Oklahoma. McIntire carried those experiences with him into college, and then Princeton Seminary, where he became entangled in the Fundamentalist-Modernist controversy, siding with J. Gresham Machen, whom McIntire followed as a student at Westminster Theological Seminary.

After Westminster, Ruotsila charts McIntire’s creation of the foundation for the modern Christian Right through print, publishing books, radio broadcasts, a newspaper. Following the Second World War, McIntire rolled this presence into a comprehensive fundamentalist political vision he called the “Twentieth Century Reformation.” This vision summoned Bible-believing fundamentalists to political action by voting and entering political office to implement a right-wing political vision.

McIntire’s message captured a large audience. His radio show was broadcasted over 600 radio stations, potentially reaching nearly 20 million listeners. Despite this appeal, the word “fight” characterizes McIntire’s career. He proved unable to work with those with whom he shared minor disagreements. More than that, his fights with evangelicals like Billy Graham and Carl Henry led him out of the conversation in the newly christened National Association of Evangelicals. In the 1960s, he led protests against mainline Christianity, the World Council of Churches, the civil rights movement, and the emerging counterculture. He organized marches to support the Vietnam War as Nixon moved to de-escalate conflict. Each entrenchment into controversy drove him further into the radical fringes of modern conservatism.

By the early 1970s, McIntire’s appeal waned. His marches and protests garnered less attention. He was the only person to lose a broadcast license under the Fairness Doctrine. Personal controversies and poor financial management alienated him from the burgeoning group that coalesced to form the modern Christian Right. Though McIntire spent decades laying the groundwork for a Bible-believing, politically conservative movement, his acquaintance, Jerry Falwell, did not include him in the Moral Majority. 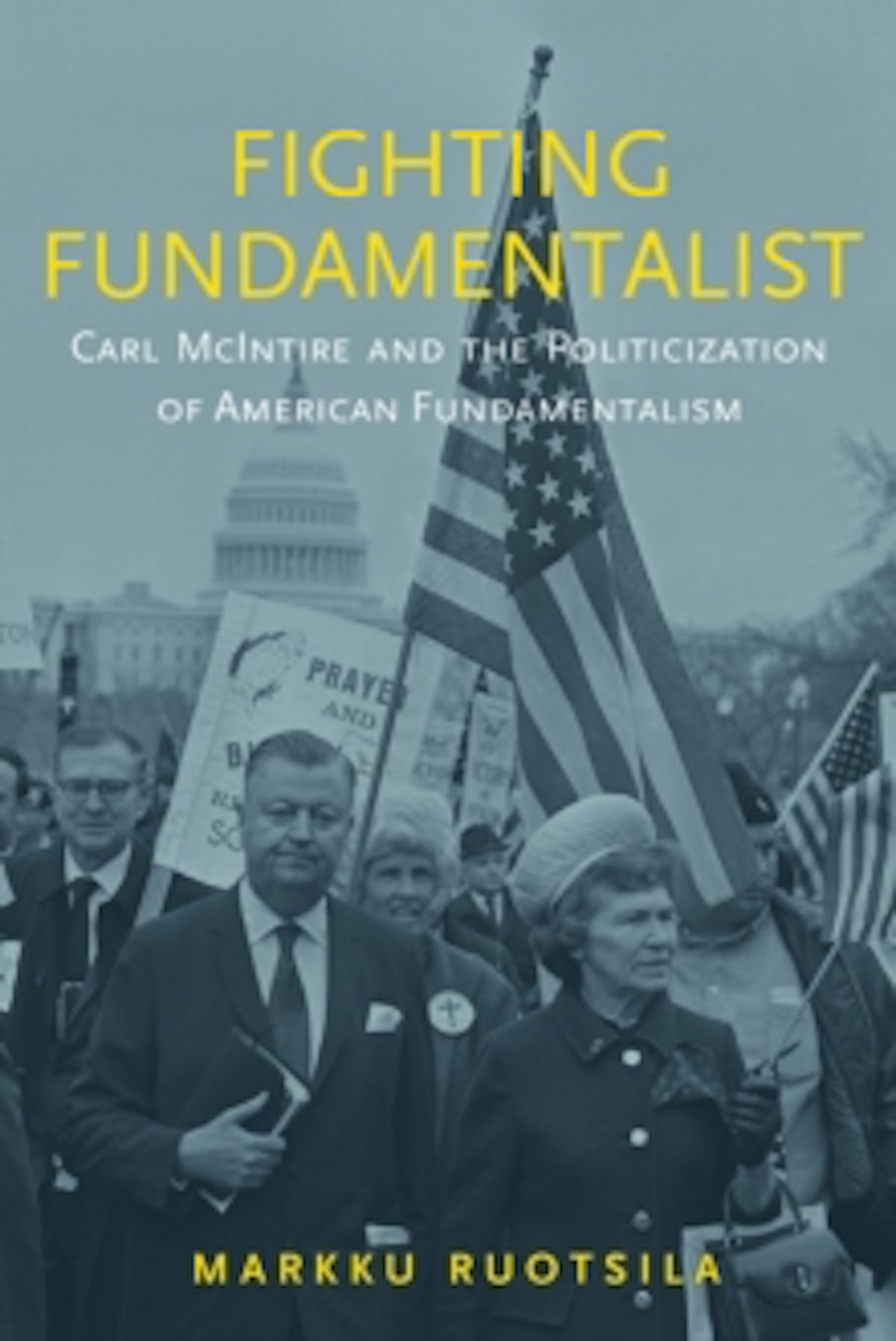 Fighting Fundamentalist presents McIntire as a larger-than-life figure. Ruotsila certainly admires him, stating that “McIntire’s public image continues to be shaped by the partisan and prejudicial arguments that were first marshaled against him by his liberal opponents” (7).

This approach at times mitigates McIntire’s hardline political conservatism. He proved willing to destroy ministerial and political careers for the sake of his anti-Communist paranoia. He supported J. Edgar Hoover and Joseph McCarthy’s Cold War efforts, even when they crossed moral lines in accusation. Ruotsila does point out the danger of McIntire’s stances during the height of the civil rights era, and shows that fundamentalists politicized the issue instead of standing in solidarity with African Americans.

A large deficiency in Ruotsila’s telling is his grounding of McIntire’s political views in those of Abraham Kuyper’s. He argues that since Kuyper was popular at Princeton when McIntire was a student, and McIntire quoted him several times, his political theology was Kuyperian (24–25). This, however, contradicts Kuyper’s presentation of sphere sovereignty and economic views, particularly when compared to McIntire’s political vision in Twentieth Century Reformation, as well as McIntire’s insistence on libertarian economic and social policies that didn’t conflict with his Fundamentalist morality. It seems difficult to apply this label to him and doesn’t fit McIntire’s widely publicized political views.

Ruotsila aptly uses source material, a difficult task since McIntire’s archive fills nearly 700 boxes. His notations show deft work and a solid grasp of McIntire’s career and impact. He needed more secondary material to better place McIntire within fundamentalist and modern conservatism historiography, but this work adds to both fields.

While an academic work, Fighting Fundamentalist contains numerous takeaways for application. McIntire’s career spanned decades. His involvement in nearly every U.S. cultural event from the 1930s through the 1970s provides many examples of pastoral engagement within politics, business, and religious disputes. His connections—which range from J. Howard Pew to J. Edgar Hoover to Bob Jones to J. Gresham Machen—demonstrate a diverse social, political, and religious landscape from which to draw lessons.

First, McIntire stands as a lesson on political engagement. He placed his political commitments above his calling as a minister. Though he promised to engage in politics “not one whit” in the first issue of The Christian Beacon, his career is overshadowed by political activity. From Cold War politics to ping-pong diplomacy, one is hard-pressed to find a political issue McIntire didn’t engage. He’s one of the first modern ministers to actively campaign for conservative Republican candidates. His Twentieth Century Reformation movement was not religious, but political. His conservative political commitments pushed him farther than Presbyterian ministers have, historically, tread. He became known more for politics than ministry.

Second, McIntire didn’t hesitate to separate from—and attack—those with whom he shared minor disagreements. The Christian Beacon documents the split from the Orthodox Presbyterian Church in 1936 in such a way that it nearly elevates a dispute over premillennialism and alcohol to the level of the Council of Nicaea. Similarly, his public disputes with Billy Graham, Nelson Bell, Francis Schaeffer, and numerous “former” friends placed him in a position of operating outside accountability structures. This eventually cost him his longtime pastorate, the Bible Presbyterian denomination, and the fundamentalist organizations he founded. His cantankerous ways forced him to attempt a meager reconciliation with Princeton Seminary in 2002, where he donated his papers in exchange for a Carl McIntire Day.

Last, Ruotsila shows that McIntire’s lack of discernment pushed him into social arenas from which his theological commitments should’ve prevented him. His strong belief in the Communist agenda of the civil rights movement put him in league with the Ku Klux Klan and Citizens’ Councils. These groups used his image and words to further their radical racism. He also advocated nuclear destruction of Southeastern Asian countries in order to stop Communism, despite the reality that large-scale nuclear bombing meant the genocide of millions. Moreover, McIntire’s associations with Major Edgar Bundy and Billy James Hargis tarnish his reputation, as he overlooked their involvement in sexual abuse in favor of furthering his own fundamentalist aims (39, 280).

Fighting Fundamentalist gives an outstanding survey of one of the most interesting characters in American religious life. While Ruotsila seems too sympathetic, he delivers an interesting narrative of an Oklahoma boy raised by a single mom who went to seminary, pastored a large church, and injected himself in American public life.

Not too many pastors can say they were an advertised reason not to vote for a presidential candidate, but Carl McIntire can. And, as Ruotsila aptly demonstrates, he can also lay claim to the title of chief founder of the modern Religious Right, for better or worse.