How do we get right with God?

One of the great achievements of the Reformation was the clarification of justification by faith. Thomas Schreiner, professor of New Testament at The Southern Baptist Theological Seminary in Louisville, Kentucky, believes this doctrine remains vitally important for Christian living. In his new book, Faith Alone—The Doctrine of Justification: What the Reformers Taught . . . and Why It Still Matters—the first volume to appear in the “5 Solas Series” edited by Matthew Barrett—Schreiner gives us a comprehensive and readable account of the doctrine as a whole.

Part I offers a readable “Historical Tour of Sola Fide.” It examines how the early church, the Roman Catholic Council of Trent, Luther and Calvin, and later Protestant figures such as Owen, Baxter, Turretin, Edwards, and Wesley understood justification. It’s good to see a New Testament scholar like Schreiner engaging with historical theology in a deeply competent way.

Part II is a “Biblical and Theological Tour of Sola Fide,” but it might be more accurate to call it a “Tour of Justification.” Faith alone is the topic of just one of the ten chapters, though it’s not unmentioned in the other nine.

Part III examines “Contemporary Challenges to Sola Fide,” from Roman Catholicism and the New Perspective on Paul (as presented by N. T. Wright).

In his foreword to Faith Alone, John Piper commends Schreiner for his treatment of his opponents.

I have never read another author who states his challenger’s viewpoint so fully and persuasively, that it seems so compelling, and then turns around and demolishes it one piece at a time with careful biblical observation and argument. (12)

Time and again, in opposing views that he considers mistaken, Schreiner begins by presenting the arguments for them and indeed showing where their strong points are. For example, while he rightly criticizes Wright and other advocates of the New Perspective on Paul, he notes that they have “unearthed an important truth in the notion that Paul rejects the ceremonial law or the boundary markers” (99). 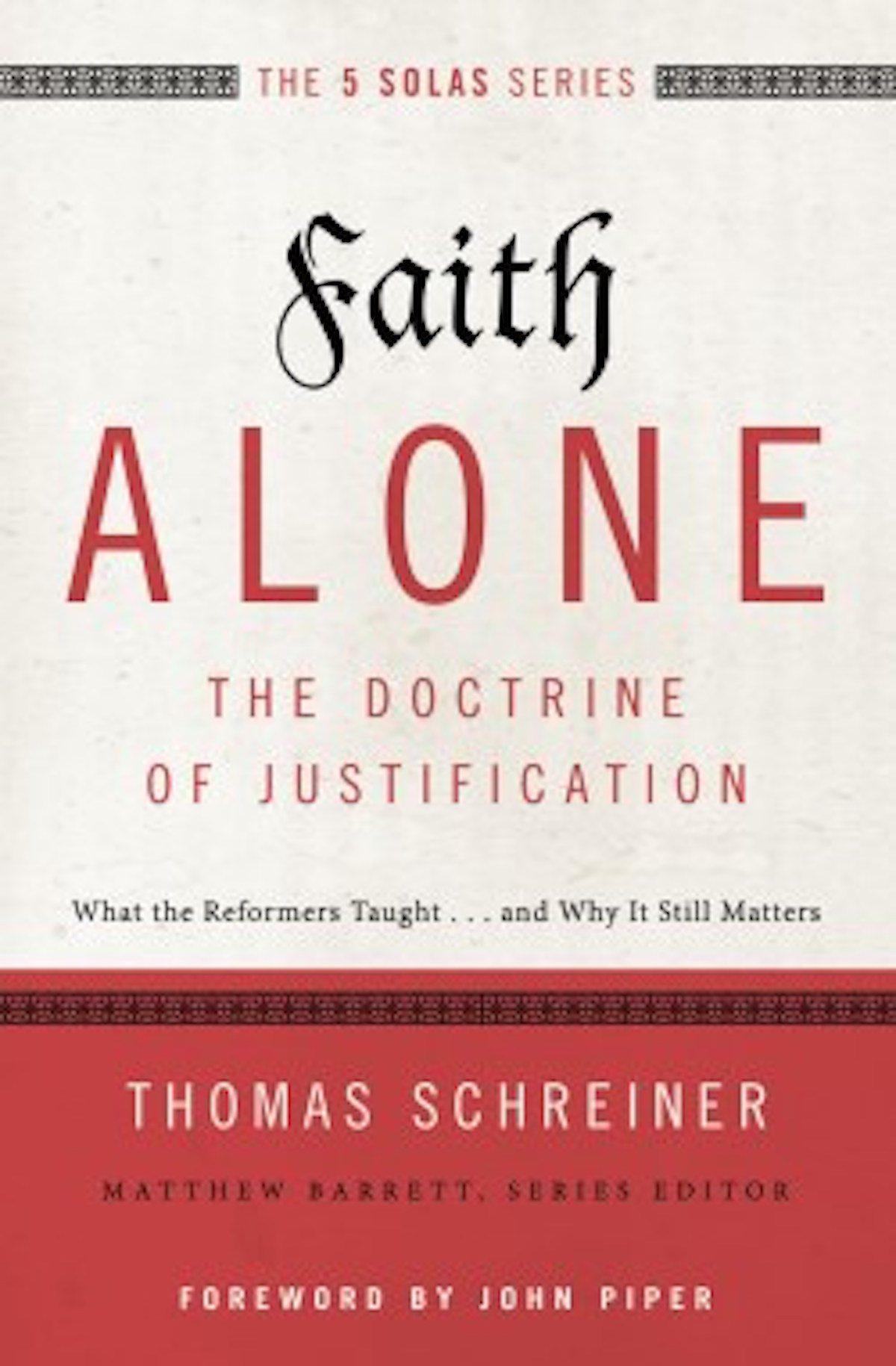 Faith Alone—The Doctrine of Justification: What the Reformers Taught . . . and Why It Still Matters

Faith Alone—The Doctrine of Justification: What the Reformers Taught . . . and Why It Still Matters

A proper interpretation of justification in the New Testament requires a proper understanding of the word righteousness. Schreiner devotes no fewer than four chapters to this point. One related issue, which has resurfaced in recent years, is whether we should say Christ’s righteousness is imputed to us. Some would rather confine themselves to saying our sin is not imputed or counted against us (Ps. 32:2) and that our faith is reckoned to us as righteousness (Rom. 4:4). Schreiner argues for imputed righteousness clearly and persuasively, but also irenically. He acknowledges that “those who affirm that their righteousness is not in themselves but in Jesus Christ affirm what the Scriptures teach about imputation, and they agree on this fundamental issue” (182–83)—presumably even if they don’t themselves use the language of imputation.

Justification by “faith alone” is a vital biblical truth, as Schreiner shows, but it’s capable of being misused:

When some hear the Reformation cry of sola fide—“Faith alone!”—they assume it means that good works are an optional part of the Christian life or that they play no role at all in our final justification or salvation. Such a perspective radically misunderstands the NT witness, while also distorting the historical and biblical meaning of sola fide. (191)

He rightly argues—against some in the so-called Free Grace movement—that bare mental assent to the gospel does not bring salvation. He shows clearly from Scripture that the only faith that saves is a living, active faith that bears fruit in good works. It’s noteworthy that all of the Reformers (including Luther) agree that good works are a necessary evidence for salvation, in the sense that a “believer” who lacks good works proves not to have a living faith.

While Schreiner dissects his theme masterfully on the whole, I thought there was one place he was a bit unfair. He remarks that the Catechism of the Catholic Church (1992) breaks no new ground on justification relative to the Council of Trent (1545–1563), but that’s not entirely accurate. At the Council of Trent, the bishops repeatedly refused to include in the “Decree of Justification” any statement suggesting that the righteous will need the merit of Christ’s passion at the Last Judgment. Rather, they said that “nothing more is needed for the justified to be considered, by the works which they have done in God, to have fully satisfied God’s law (according to the state of this life) and to have truly merited eternal life” (ch. 16).

The Catechism of the Catholic Church, in its section on merit (§§2006–11), restates traditional teaching and draws on Trent in particular. The section, however, concludes with a significant quotation from Teresa of Lisieux. At the end of her life, she confessed she would appear before God with empty hands, not asking God to count her works. Since all our righteousness is blemished in God’s eyes, she wished to be clothed in his righteousness. These words seem to affirm what the bishops at Trent refused to accept.

In short, Faith Alone is an excellent treatment on justification. It sets the doctrine out clearly and judiciously, both in its history and biblical basis, as well as expounding and defending the beauty of “faith alone” in particular.

I hope the remaining volumes in the series are as good as this one.

Tony Lane is professor of historical theology at the London School of Theology, UK, where he has taught for many years. He has written 12 books, half of them being on John Calvin. He is an elder at Northwood Hills Evangelical Church.