The older I get, the more I’m learning to rest and rejoice in the sovereignty of God—not simply as a pivotal doctrine of my theological tribe, but as an existential expression of our Father’s engagement in the details of our lives. The request to write a review of J. R. Briggs’s new book, Fail: Finding Hope and Grace in the Midst of Ministry Failure, easily falls into that category.

It’s been two years since I transitioned from the staff (as founding pastor) of Christ Community Church—a church I planted with friends and had the privilege of pastoring for 26 years. Mind you, I haven’t retired from vocational ministry—though there have been times in 36 years of ordained ministry I sorely wished for a calling other than the one God gave me. And that’s certainly one of the main reasons I have great appreciation for Briggs’s new book.

Seminary didn’t, and couldn’t, have prepared me for the full continuum of “rapture and rupture” that is a predictable (though heart-exhausting) part of life as a leader in the body of Christ. Fail is a well-researched and well-written book that voices many of the failures and wounds I’ve personally experienced as a pastor—and those dear friends in ministry and young leaders with whom I walk have experienced, too.

When I first glanced at the title, I almost declined the request to review the book, wrongly assuming it would tell the story of a pastor’s journey through an affair or a pornography entrapment—offering hope that there’s life on the other side of a sex addiction. Though I’m thankful for that book, that’s not this book, though such scenarios are most definitely anticipated and processed through the lens of the gospel. 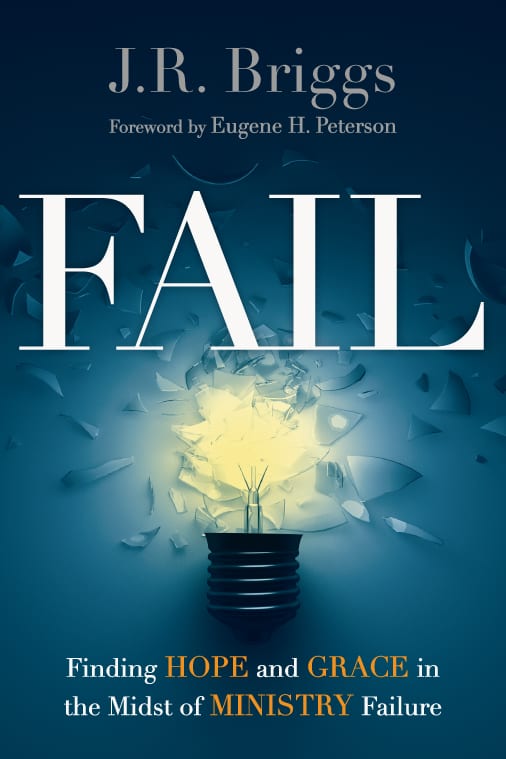 Fail: Finding Hope and Grace in the Midst of Ministry Failure

Fail: Finding Hope and Grace in the Midst of Ministry Failure

Instead, Fail does what the Bible does: it throws open the curtain on stories of leaders who experience failure—both as the consequence of our own brokenness, foolishness, and choices, and also at the expense of those we should be able to trust. All of us are agents and victims of sin, and so are the people with whom we work. Briggs, founder of Kairos Partnerships (a ministry that equips, trains, supports, and encourages pastors), makes this point wonderfully clear throughout the book.

I couldn’t help but think of the litany of leaders whose failures, and experience of failure, the Bible unabashedly chronicles—not as a way of saying that “boys will be boys” but as a way of clearing indicating that “everybody needs the gospel, and there’s only one true hero, Jesus.”

To name a few: Noah landed the ark and proceeded to have a keg-party-for-one in the nude, resulting in an expletive-hurling moment at his sons. Abraham, the father of the faith-full, not once but twice passed off his wife as his sister, setting the “model” for his son to do the same. Peter, instead of owning his need for the cross, tried to keep Jesus from the cross, serving as the mouthpiece of Satan (Matt. 16:23). And then 25 years later he had to be confronted face to face by Paul because he feared the disapproval of the Judaizers more than he loved his new Gentile brothers and sisters in Christ (Gal. 2). James and John, the “sons of thunder,” became opportunists-in-the-moment as they sought to join Jesus, not on either side of his cross, but on his right and left in glory. We’re all messes needing God’s mercy.

The apostle Paul knew the pain of being slandered and exploited while he was in prison (Phil. 1:12–18); the defection of associates (Phygellus, Hermogenes, and Demas [2 Tim. 1:13–18; 4:10]); the loneliness of ministry, when you need friends the most (2 Tim. 4:16); sheer craziness in his church plants (1 Corinthians); and a smorgasbord of suffering, dysfunction, and darkness that’s almost off the charts (2 Cor. 11:16–30). We all minister among messy people who, like us, need more of the gospel.

That leads me to underscore one of the great strengths of Briggs’s book—his persistent commitment to ask the question, “What are the implications of the gospel for the way I have failed and/or have been failed?” We simply don’t need another pastor war story volume, dripping with victimization and devoid of humility and the aroma of repentance. Failure must be stewarded, or it will become rocket fuel for shame and/or cynicism.

Through his own story of failure (of both varieties), we are invited to follow Briggs on the path to grace, hope, and healing. He shows us that there is a huge difference between boasting about our weaknesses and boasting in our weaknesses—one leads to a hard heart, the other to Christ’s glory. He also gives us plenty of practical tools for moving forward through our stories of failure, and he does so without falling prey to simplistic formulas or Christian-subculture pragmatism.

What’s missing in Fail? At times I wished to hear the “other” side of his story—from the perspective of church members and leaders who also were “there.” Or better yet, I would have loved to taste the fruit of reconciliation from those who lived through great failure together. Perhaps that will be Briggs’s next book!

Scotty Smith is the founding pastor of Christ Community Church in Franklin, Tennessee. You can follow him on Twitter.