When we hear the word exodus, we probably think about Moses and Pharaoh, Egypt and slavery, plagues and Passover, redemption and Red Sea. We think about the book that bears its name.

But if you think the exodus is just some story near the front of your Bible, think again. In their new book, Echoes of Exodus: Tracing Themes of Redemption through Scripture, Alastair Roberts and Andrew Wilson want to convince you that the exodus is one of the most pervasive patterns in the Bible—a melody recurring again and again until it reaches its crescendo in the true Passover lamb, who redeems his captive people and his groaning creation.

Roberts and Wilson are known for working together on the Mere Fidelity podcast with Derek Rishmawy and Matthew Lee Anderson (to whom the book is dedicated). Wilson is teaching pastor at King’s Church in London and author of several books. Roberts is a scholar who divides his time in the United States between no less than three theological Institutes (Davenant, Theopolis, and Greystone) and is otherwise known for writing long-form articles online. This is his first book. 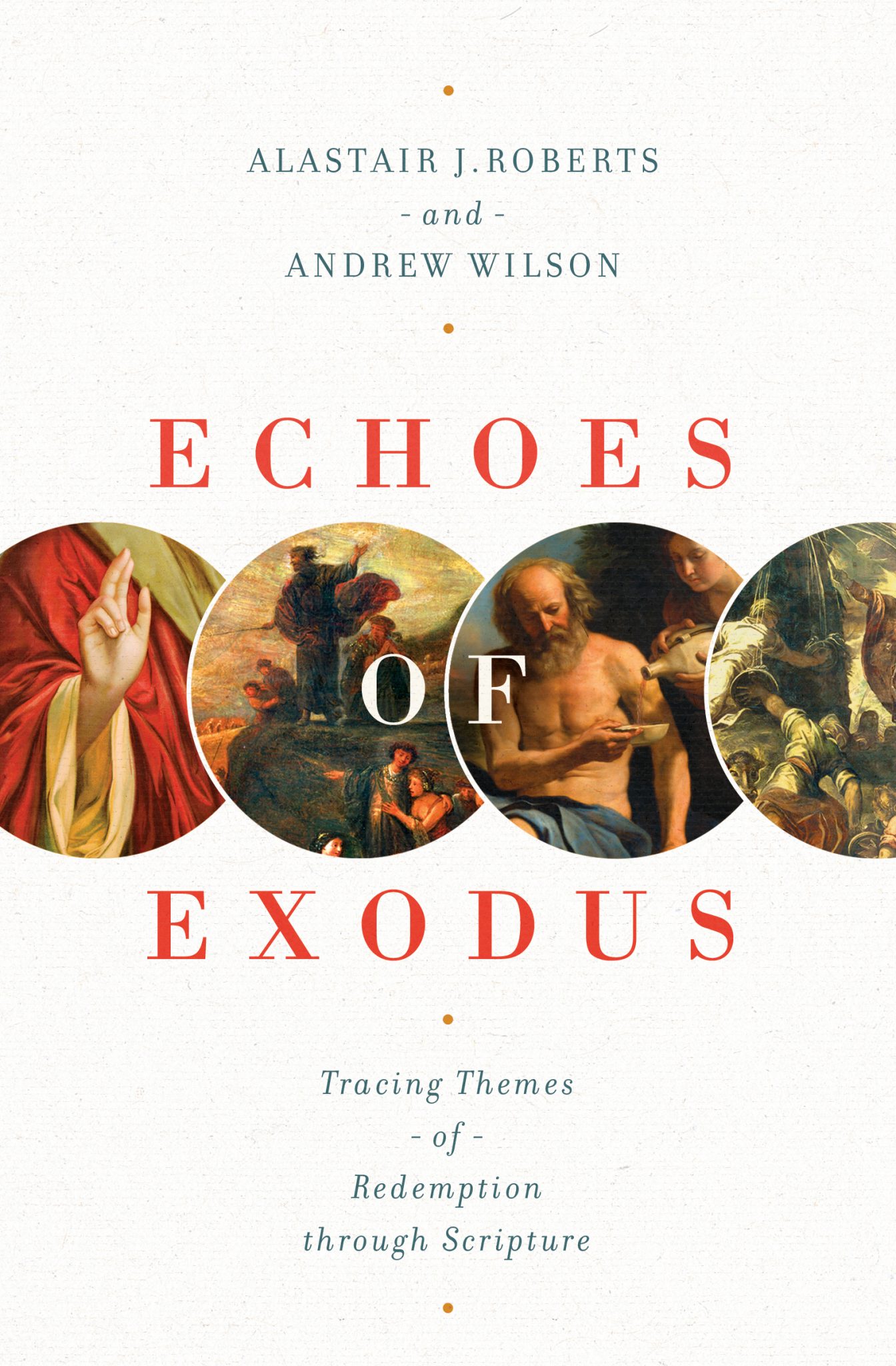 The exodus—the story of God leading his chosen people out of slavery in Egypt—stands as a pivotal event in the Old Testament. But if you listen closely, you will hear echoes of this story of redemption all throughout God’s Word.

Using music as a metaphor, the authors point us to the recurring theme of the exodus throughout the entire symphony of Scripture, shedding light on the Bible’s unified message of salvation and restoration that is at the heart of God’s plan for the world.

And frankly, it’s a wild and crazy ride and will sometimes stretch the limits of your credulity. At times I was left scratching my head. But more often I was staggered at the textual connections they were making (e.g., the exodus-shape of the book of Revelation, 150–51). And more than once I was in tears from the poetic beauty of their prose, especially when connecting it all to Jesus (see esp. 114–115, 152).

It’s a wild ride, but it’s worth it. Because even if you hear only half the echoes of exodus they want you to, you’ll likely be hearing twice as many as you do now. So prepare to be challenged, and hopefully transformed.

If you hear only half the echoes of exodus they want you to, you’ll likely be hearing twice as many as you do now.

When we discuss biblical typology, we often use visual metaphors. We speak of seeing Jesus in the Old Testament; we say that the exodus is a picture of our salvation. This is good—even biblical (2 Cor. 3:13–18). But as the book’s title implies, Roberts and Wilson have chosen to explore auditory metaphors in what they call a “musical reading of Scripture.”

As the Bible commences its overture, we hear a melody, and a regular rhythm begins. As things develop, various harmonies and counterpoints arise, some of which complement the melody beautifully, but some of which chafe against it, leaving us . . . to wonder what the Composer is doing. . . . Then the melody returns . . . bringing a temporary sense of resolution. . . . [The] rhythms of Scripture continue to be accented. . . . But every bar, every bar . . . heightens the sense that the piece is still incomplete. Eventually, after an uncomfortably long silence, the score builds to a massive crescendo in Christ, as the various themes come together and resolve in a fashion that nobody could have imagined, bringing the audience to its feet. Yet even then, the piece does not end. . . . Only at the finale, when the Christ-crescendo is recapitulated . . . do we ultimately see the full scope of the Composer’s vision. (25–26)

The pattern and elements of the exodus story are thus heard as a theme that reemerges with slight variations throughout Scripture.

For example, take one element of the exodus theme: that of leaving your home to sojourn in a foreign land only to return home with riches—or as they put it, “people going out empty and coming back full” (84; Gen. 15:14; Ex. 12:36). Ruth gives us a variation of this theme, as Naomi leaves full and comes back empty (Ruth 1:21). The authors note that Naomi’s experience reflects Israel’s frustration during the period of the judges. “We have had our exodus . . . we are now back in the land—but we are not living in the abundance we had hoped for” (85). Not only is this a variation on the theme; it’s proof the symphony is “still incomplete.”

This musical reading structures the entire book. The chapters are thus organized into five parts: an “overture” followed by four “movements.”

The overture introduces the musical concept and then looks at the Last Supper, which they creatively call “The First Supper,” since the original Passover celebration was patterned after the true Passover and meant to “evoke the Last Supper in advance” (much like marriage was meant to evoke Christ and the church in advance).

The first movement unpacks the exodus story from Exodus through Joshua, introducing basic elements like wicked king, defeated gods, and rescued people. The second movement jumps back and covers the exodus in Genesis. (Yes, you heard that right. The parallels in Abraham’s life will blow your mind. Think going down to Egypt to escape famine, only to have your wife taken captive by Pharaoh and then freed when God sends plagues on the Egyptians! The book is full of this sort of thing.)

The third movement attends to the echoes in the remainder of the Old Testament, from Ruth to Esther. Roberts and Wilson make a good case that the exodus didn’t technically end until the building of the temple under Solomon. (Again, read chapter 14 and prepare to have your mind blown.) The fourth movement plays the crescendo-fulfillment in the New Testament, from Gospels to Apocalypse. In good biblical-theological fashion, the authors view this crescendo as a two-stage, already-not-yet finale, which leaves us as sojourners redeemed from slavery but not in the Promised Land.

The book closes with a brief coda on “living the exodus.”

As I said earlier, this book may stretch the limits of your thinking, depending on where you fall on the hermeneutical spectrum. Some interpreters are more minimalist in their interpretation, preferring to see types and hear echoes only where the New Testament (or later Old Testament) explicitly identifies them. To them this is safe, as it staves off the wild allegory that finds Jesus under (or in) every rock in the Old Testament (1 Cor. 10:4).

But from the beginning, Roberts and Wilson make clear that they’re going to take a more maximalist path (14), citing influences like G. K. Beale (Handbook on the New Testament Use of the Old Testament), Richard Hays (Echoes of Scripture in the Gospels), Peter Leithart (Deep Exegesis), and James Jordan (Through New Eyes). They anticipate possible skepticism:

Sometimes you may disagree. You may think we’re reaching, or you may think we’ve missed something. In many ways, that doesn’t matter. As long as we recognize that The Lion King is based on Hamlet, we can agree to disagree on whether . . . we can see Rosencrantz and Guildenstern in the characters of Pumbaa and Timon. (13)

Read and make up your own mind. Given my own influences (James Hamilton, Jonathan Pennington, and so on), I almost always found their connections credible, even if not conclusive. At any rate, there are worse things than Jesus you could find under every Old Testament rock.

First, the exodus highlights both our liberty and also our responsibility. The Israelites weren’t delivered from Egypt in order to “wander off and do their own thing” (145). Neither are we delivered from sin and Satan in order to live for ourselves (2 Cor. 5:15). Rather, we’re set free from one master that we might serve a new one. Besides being a key part of the exodus, this truth is “at the heart of Christian discipleship” (145).

And finally, as “exodus people,” Christians must always be those who sympathize and advocate for the truly oppressed. You don’t have to embrace liberation theology to acknowledge that those who have known both the oppression of Satan and also the elation of freedom ought to be disposed toward those who still suffer under various forms of Satanic oppression. “We use our power to serve the interests of those without it, because the exodus was never just for us” (158).

So I would encourage you to take up this slender volume and read. Learn to hear the echoes. Learn to tell the story—the story of a “cosmic exodus stretching from Eden to New Jerusalem” (151). Tell it to your neighbors. Tell it to your children. Because “one day the Jordan will divide, and the trumpets will sound, and worldly powers will collapse, and the vines will stretch as far as the eye can see” (158).

Even so. Come, Lord Jesus.