You don’t need to stretch your imagination far to see how the following scenario could play out on election night.

President Trump leads in enough states across the south and midwest in order to proclaim that he has secured re-election. However, mail-in ballots continue to be counted, and Vice President Biden doesn’t concede. The television networks decline to call the election in favor of President Trump. In fact, they believe Vice President Biden has the advantage and could still amass a sizable victory both in the popular vote and also in the Electoral College. Nevertheless, President Trump declares victory, and his supporters celebrate.

In response, Vice President Biden’s supporters organize mass protests in cities across the country. They turn violent. America’s cities burn. President Trump declares these protests to be unlawful, and instead of working with unsympathetic governors to mobilize National Guard units, he orders military intervention. Television networks capture scenes of rioters tossing Molotov cocktails at soldiers from the 101st Airborne Division. Authorized to use deadly force if attacked, soldiers return fire. The ensuing bloodbath confirms to President Trump and his tens of millions of supporters that half the country will never accept his leadership as legitimate. They don’t grieve the dead rioters. Vice President Biden’s supporters, meanwhile, interpret these events unfolding live on their Twitter timelines as a military coup. They conclude that half of the country would rather kill them than submit to the peaceful transfer of power. While the cities continue to burn, they appeal to the United Nations and America’s global allies for armed intervention.

In a nation formed in Revolution and renewed in Civil War, this scenario is hardly a stretch.

In a nation formed in Revolution and renewed in Civil War, this scenario is hardly a stretch. Based on what we’ve seen so far in 2020, how could anyone take for granted a peaceful election? I wish I could say David French’s new book, Divided We Fall: America’s Secession Threat and How to Retore Our Nation, will set minds at ease. Instead, he set mine to imagining an election-night revolution as possible or even plausible. The second part of his book envisions two ways the United States could dissolve. Before you dismiss French as unduly pessimistic, consider the ways secession could benefit both political parties. Imagine, for example, a Republican Party that doesn’t need to worry about 55 votes in the Electoral College from California. Would either party fight for union if disunion secured single-party rule for at least a generation? 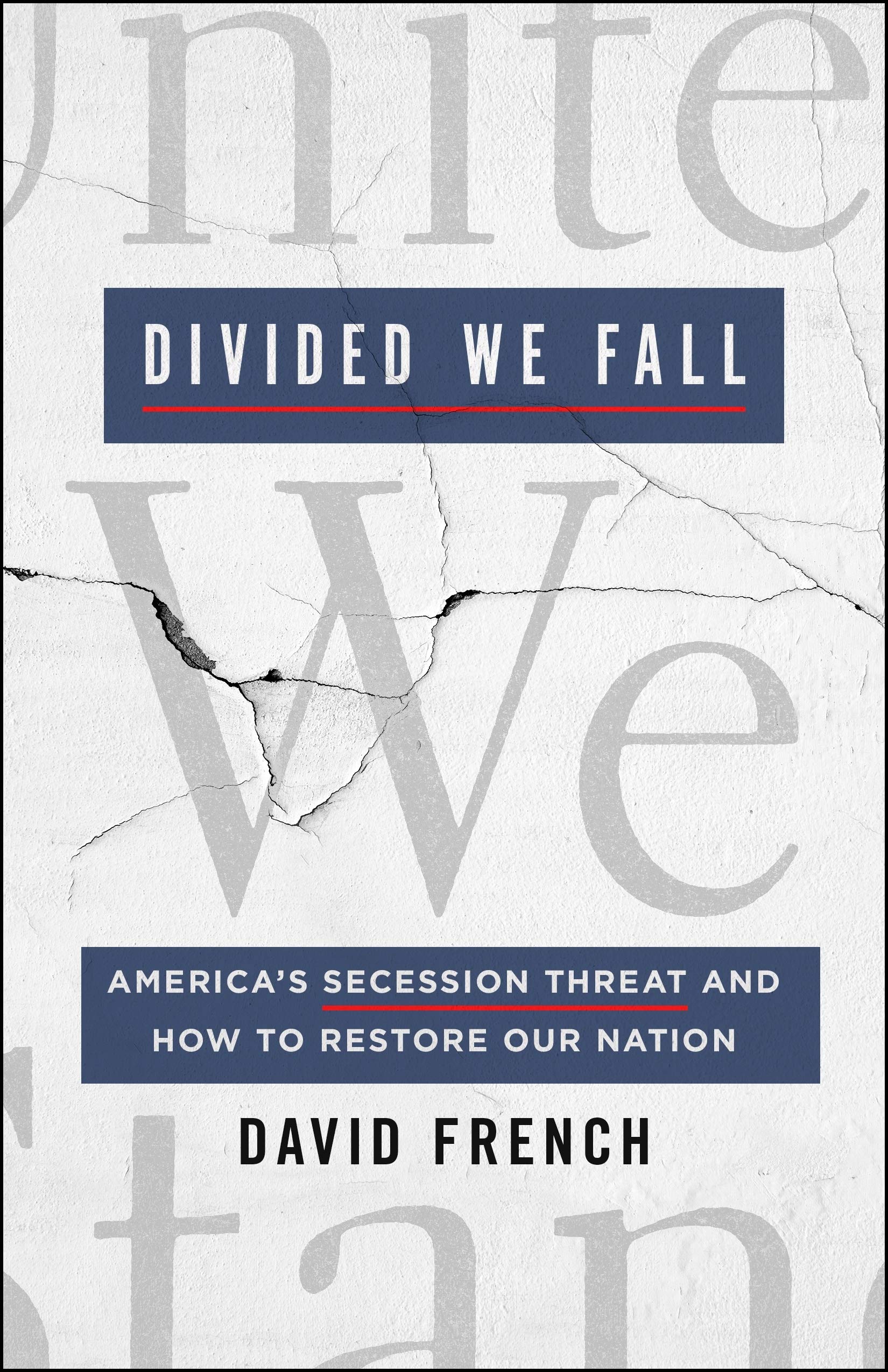 Divided We Fall: America's Secession Threat and How to Restore Our Nation

Divided We Fall: America's Secession Threat and How to Restore Our Nation

An engaging mix of cutting edge research and fair-minded analysis, Divided We Fall is an unblinking look at the true dimensions and dangers of this widening ideological gap, and what could happen if we don’t take steps toward bridging it. But our future is not written in stone. By implementing James Madison’s vision of pluralism―that all people have the right to form communities representing their personal values―we can prevent oppressive factions from seizing absolute power and instead maintain everyone’s beliefs and identities across all fifty states.

Reestablishing national unity will require the bravery to commit ourselves to embracing qualities of kindness, decency, and grace towards those we disagree with ideologically. French calls on all of us to demonstrate true tolerance so we can heal the American divide. If we want to remain united, we must learn to stand together again.

French doesn’t write in order to welcome such an outcome but instead to prevent it. French, senior editor of The Dispatch and an outspoken critic of President Trump from the right, sees growing political contempt in our lack of common popular culture, geographic separation, and divergent beliefs. “We cannot assume that a continent-sized, multi-ethnic, multi-faith democracy can remain united forever,” he writes, “and it will not remain united if our political class cannot and will not adapt to an increasingly diverse and divided American public.”

Readers familiar with French won’t need much convincing from the first part of the book about the seriousness of our divisions. They will recall the attacks French and his wife endured in 2016 when he considered launching a quixotic third-party challenge to Trump and Clinton. French withdrew following online attacks by the alt-right aimed at his adopted daughter from Ethiopia. All too often in recent years we’ve seen hateful online rhetoric devolve into deadly violence, across the political spectrum. French can’t afford to assume that when your daughter’s image has been imposed on a gas chamber that the online trolls will stay hidden away in their caves.

But the bulk of the book’s practical value comes in the third part, his appeal for saving America through pluralism and federalism. Most Christian pushback against French since 2016 has concerned his political preference for persuasion over coercion. In fact, “David French-ism” has become a shorthand reference on the right for supposedly weak and ineffective efforts to slow the pace of cultural decay in the West. A 2019 First Things essay by Sohrab Ahmari called for an escalation in the culture wars in response to such barbarities as public libraries hosting drag queens to read to small children. Wouldn’t justice and common sense demand that higher levels of government put a stop to this foolishness? Ahmari, op-ed editor of the New York Post, concluded:

Progressives understand that culture war means discrediting their opponents and weakening or destroying their institutions. Conservatives should approach the culture war with a similar realism. Civility and decency are secondary values. They regulate compliance with an established order and orthodoxy. We should seek to use these values to enforce our order and our orthodoxy, not pretend that they could ever be neutral. To recognize that enmity is real is its own kind of moral duty.

At some point, unless you’re willing to kill and be killed, you need to live and let live.

There’s an appealingly simplistic logic to Ahmari’s argument. Drag Queen Story Hour is a bad idea, and conservatives should seek and deploy the coercive force of the government to stop it. French’s book teases out the implications of this logic for the American Republic. But any power you can wield against your ideological enemies, they can wield against you once they gain power. The more power the government holds, the more desperately each side seeks it. The more desperate each side grows, the more likely they are to use real bullets in the culture war. At some point, unless you’re willing to kill and be killed, you need to live and let live.

French prescribes more federalism as a way to turn down the heat on culture wars. Let California provide socialized healthcare, he recommends, but keep the Bill of Rights as binding everywhere. As I see it, if federalism can help starve the craving for attention in national politics, then I’m all for it. Return the realm of concern to our realm of influence: family, neighborhood, church. Less sitting at home watching Sean Hannity or Rachel Maddow and more gathering in the local pool hall.

The United States formed in the aftermath of religious wars that ravaged Europe between the 16th and 18th centuries. Today we take for granted that you can build a nation on an idea and not on ethnicity or religion. But the United States remains a novel experiment. Can this nation so conceived long endure?

Christians don’t need to settle for the pattern of Judges, with ever-escalating debauchery rescued momentarily through strongman deliverance.

French concludes with an appeal to Micah 6:8 and the virtues of doing justice, loving mercy, and walking humbly with God. “No matter the depth of our national division,” French writes, “there is no point where it is too late to show those virtues. . . . We hope and pray that the cry for a better way comes before our national bonds are irretrievably broken.”

There is still time for an alternative to secession and disunion and civil war. Christians don’t need to settle for the pattern of Judges, with ever-escalating debauchery rescued momentarily through strongman deliverance. Instead, the church can model justice, mercy, and humility by confessing sin, seeking repentance, and turning to God in desperate need of revival.

The peace of Christ shall overcome the war of cultures.