Simon Gathercole’s work on the New Perspective on Paul, synoptic Christology, gnostic gospel writings, and other matters is well known. His latest book, Defending Substitution: An Essay on Atonement in Paul, examines the issue of substitution in the writings of the apostle.

Originating in various lectures, Defending Substitution retains Gathercole’s lecture style, which also accounts for its brevity. The senior lecturer in New Testament studies at the University of Cambridge structures the book in simple fashion. Chapter one distills some objections to substitution from various New Testament scholars, and chapters two and three set forth a defense of substitution in Paul. (Gathercole examines 1 Corinthians 15:3 and Romans 5:6–8 respectively.) He sums up his case in the conclusion. 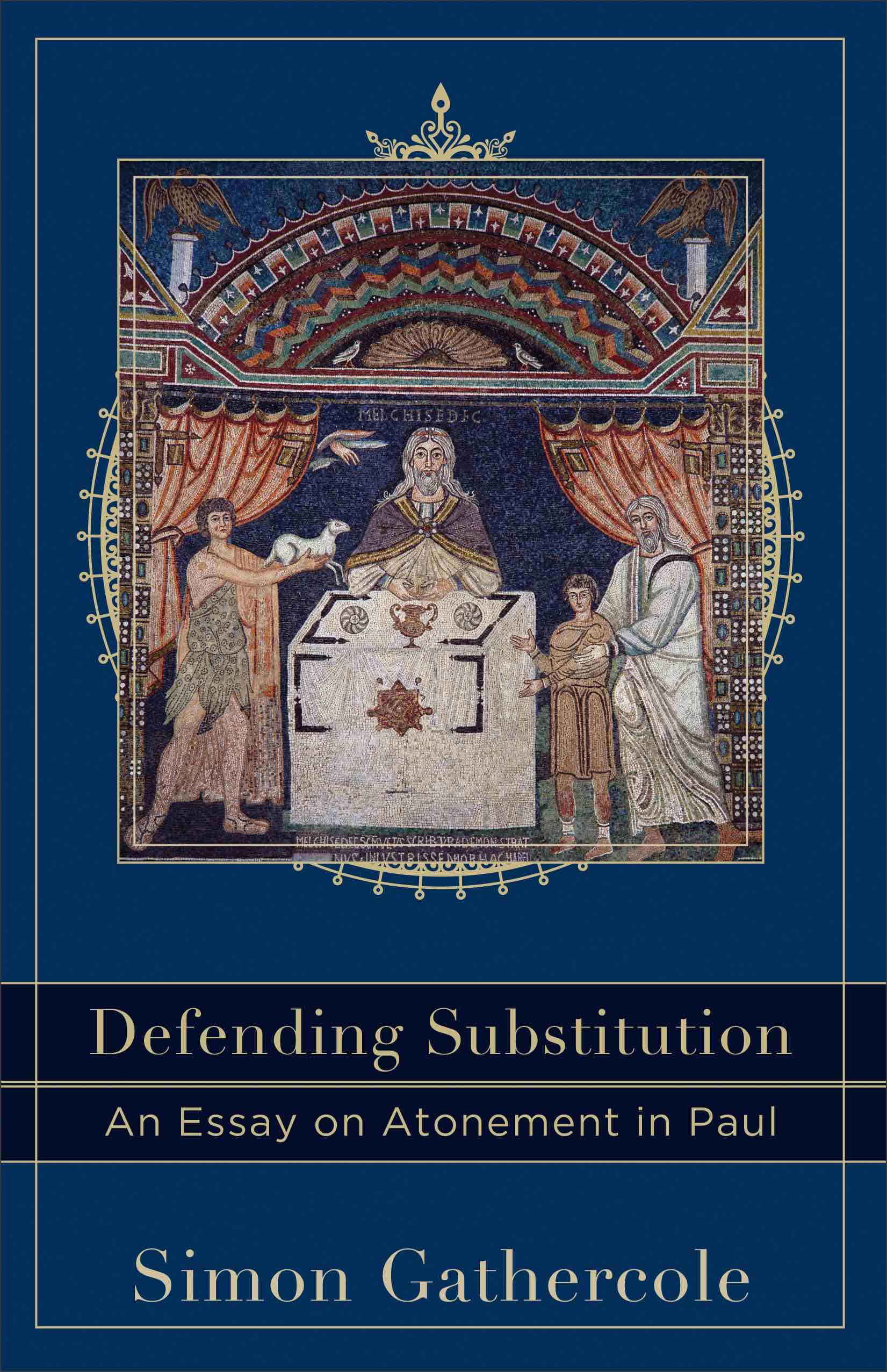 Defending Substitution: An Essay on Atonement in Paul

Defending Substitution: An Essay on Atonement in Paul

Gathercole also briefly considers some objections to substitution. For instance, many opponents reject substitution as a legal fiction, as immoral, as philosophically objectionable (according to Kant and others who have followed him), and as incompatible with the physical death of believers. Though Gathercole doesn’t respond to these charges in-depth, he does say the legal fiction accusation reflects an individualistic view of human identity that doesn’t accord with Scripture. Moreover, the claim that substitution is immoral doesn’t persuade since God substitutes himself and Christ willingly and gladly gives his life for sinners. Christians throughout history have received the teaching of substitution gladly, and it has filled them with joy and praise. Gathercole then turns the Kantian objection aside because it “threatens both the freedom and mercy of God” (13). Having said all this, though, Gathercole believes the most important objection is exegetical, and he turns to that matter in the remainder of the book.

Gathercole examines three historical objections to substitution. First, he considers the Tübingen view propounded by Hartmut Gese and Otfried Hofius. The Tübingen view maintains that the atonement communicates identification and representation, not substitution. Gese and Hofius describe the atonement as “inclusive place-taking” by which sinners are brought into a relationship with God. Gathercole accepts the representative understanding of the Tübingen reading but holds they wrongly deny substitution, particularly in downplaying the role of individual transgressions.

Second, Gathercole evaluates Morna Hooker’s notion that we have interchange in Christ instead of substitution. According to Hooker, the atonement focuses on identification and entering our sphere instead of replacement or substitution. Once again, Gathercole affirms what Hooker supports, for he sees the themes of solidarity and participation in Paul’s theology of the cross. He questions, though, whether Hooker explains adequately the importance of Christ’s death and Paul’s focus on individual sins.

Last, Gathercole analyzes the apocalyptic view of J. Louis Martyn. Martyn and others read the death of Christ in terms of Christus Victor: human beings are enslaved to sin as a power and their plight isn’t in individual sins or the need for forgiveness. Gathercole agrees Christus Victor plays an important role in Paul’s theology, for the liberating work accomplished in the cross is clearly an integral part of Paul’s gospel, especially in Galatians. Still, eliminating substitution is unsatisfactory, for human beings aren’t only victims of sin but are also guilty for their sin and stand under God’s wrath (Rom. 5:9; 1 Thess. 1:9; 5:9). In addition, the apocalyptic reading doesn’t sufficiently explain how Christ’s death affects liberation. All three models presented here fail to account for the significance of individual sins and transgressions in Pauline thought. The notion that sin and transgression are only powers to be delivered from is foreign to Paul’s theology and fails to accord with the evidence.

In chapter two Gathercole examines 1 Corinthians 15:3, where Paul says Christ died for our sins. The text bears major importance in Pauline thought since he summarizes the gospel in these verses (1 Cor. 15:1–11). Indeed, 1 Cor. 15:11 indicates that this gospel was shared and disseminated by all the apostles. What makes this text especially vital, as Gathercole observes, is that Paul grounds the gospel he proclaims in the Scriptures. Though various Old Testament texts may have been in Paul’s mind, Gathercole argues Isaiah 53 was particularly fundamental to the apostle’s theology (which is now the majority view among scholars) and then shows its relationship to 1 Corinthians 15:3. The theme of substitution pervades Isaiah 53 and is picked up by Paul in 1 Corinthians 15:3. Christ, according to 1 Corinthians 15:3, died both as a result of our sins and to deal with our sins. To say that one died “for” (hyper) sins isn’t substitution in itself, but substitution is involved when one dies for the sins of others rather than for one’s own. Gathercole shows how Paul clearly presents the notion of substitution in 1 Corinthians 15:3 and roots it in the Old Testament witness.

Gathercole also provides a fascinating excursus on why Christians still die if Christ died for them. He argues that Paul reconceives what death means for Christians in four ways. First, Paul often describes death as “falling asleep” or as leaving this world to be with Christ (Phil. 1:23). Therefore, death doesn’t play the same role for believers as it did before their salvation. Second, the apostle also describes death in metaphorical terms. I wasn’t quite sure why this point was significant for Gathercole’s argument. Perhaps he’s simply saying it’s another example of Paul reconfiguring death. Third, Paul distinguishes kinds of death: unbelievers die a death that involves judgment and destruction (apollumi), while believers die a death that anticipates life. Fourth, it seems significant that Christ is never said to sleep in death but always to die. In other words, Jesus suffers the death believers deserve so that they won’t perish and suffer judgment as unbelievers will.

In the final chapter Gathercole examines Romans 5:6–8. This is a most fascinating chapter, for here Gathercole finds parallels of substitution in the noble deaths recorded in classical literature. Gathercole also notes a distinction between Romans 5:6–8 and 1 Corinthians 15:3. In Romans, Christ dies in place of people, whereas in 1 Corinthians 15:3 he dies for our sins. The parallel with noble deaths in Romans is evident, for Paul appeals to such in Romans 5:7. According to Gathercole, the death of some in the place of and instead of others in classical literature would have been well known to Paul and his readers. This is especially true regarding the death of Alcestis for her husband Admetus, which is found in Euripides, Plato, Plutarch, Musonius Rufus, and inscriptions from the first century AD. Of course, Alcestis is not the only example of one dying for another, since we also see substitution when someone dies for friends or family members. What is the relationship between Christ’s death and noble deaths in classical literature? In both instances, Gathercole says we have death on behalf of others. What is striking, though, is that Christ died for his enemies and for the ungodly rather than in place of his friends. That one would die for one’s enemies was foreign to those in the Greco-Roman world.

We see the virtues of Gathercole’s scholarship in this stimulating work. Defending Substitution makes precise distinctions and carefully attends to Scripture. Gathercole’s use of primary sources is always illuminating, and his parallels to noble deaths in classical literature are particularly helpful. His criticisms of alternative views are brief but understandable in a short book. I also wonder if the martyr traditions, as Jarvis Williams argues, may be in the background of Paul’s thought.

That’s a discussion for another time and place, though. For now, we can be grateful for Simon Gathercole’s excellent scholarship.