Jonathan Edwards once observed, “There is perhaps no part of divinity attended with so much intricacy, and wherein orthodox divines do so much differ, as stating the precise agreement and difference between the two dispensations of Moses and Christ.”

Translation: putting the biblical covenants together is hard work. That difficulty has resulted in a host of competing views, ranging from classical covenant theology to progressive dispensationalism.

Contentious questions abound, most of them over the amount of continuity among the covenants. Others touch on the nature or even the existence of certain covenants. For example: 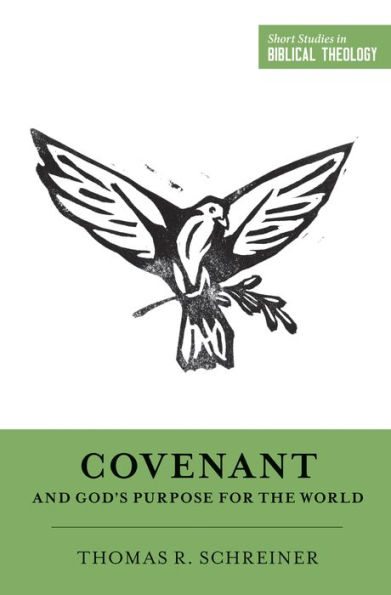 Covenant and God’s Purpose for the World

Covenant and God’s Purpose for the World

Thomas Schreiner—professor of New Testament interpretation at The Southern Baptist Theological Seminary—is here to help you answer these questions. His new book, Covenant and God’s Purpose for the World, is the fourth release in Crossway’s Short Studies in Biblical Theology series, edited by Dane Ortlund and Miles Van Pelt.

Covenant tackles its topic by tracing the covenants through the Bible’s unfolding storyline, from creation to new creation. It consists of an introduction followed by six chapters, each dealing with a different covenant, all in redemptive-historical order.

Schreiner writes with a winsome tone, clear prose, and copious amounts of Scripture. Though his answers to the contentious questions above certainly won’t satisfy everyone, much of the book is a compelling introduction to the biblical covenants that all Christians can agree with and profit from.

What Is a Covenant?

Many theologians have argued that covenant is the central theme of Scripture. Schreiner disagrees—indeed, he suspects the Bible doesn’t have one center (11)—but he fully agrees that covenant is a central concept (12).

To understand how covenants operate in Scripture, we must first know what a covenant is. Answering this question involves studying the biblical covenants inductively and determining which features are essential and which are incidental. Coming up with a definition isn’t easy, but here’s Schreiner’s attempt: “a covenant is a chosen relationship in which two parties make binding promises to each other” (13).

What immediately strikes me about this definition is what’s missing: oaths, signs, ceremonies, and the shedding of blood. Schreiner argues persuasively that while these things may be involved in a covenant, none is essential, since none occurs in every covenant (18).

Making “chosen” an essential part of a covenant may also seem questionable. After all, did creation (or even Noah) really choose to enter into covenant with God after the flood? It doesn’t appear so. But Schreiner’s meaning seems to be more along the lines of “chosen by at least one of the parties, rather than being a pre-existing natural relationship.” For example, the relationship between husband and wife is a covenant in a way the relationship between parent and child is not (14).

Having established a definition, Schreiner then turns to discuss the major covenants in the Bible’s storyline. He identifies six:

Schreiner admits this is “perhaps the most controversial [chapter] in the book,” since many theologians deny there is such a covenant (19). Nevertheless, he notes the absence of the word “covenant” in Genesis 1–2 isn’t decisive, since the same could be said of 2 Samuel 7 and the Davidic covenant (20). He also sees Hosea 6:7 as a reference to a covenant Adam broke (20). In the end, despite not holding to classical covenant theology, Schreiner actually makes an effective case for the traditional Reformed view of the covenant of works.

This covenant stands out for a couple reasons. First, it’s a clear example of an unconditional covenant (37). There’s no hint man can break this covenant and cause God to flood the earth again. Second, it’s also an example of a non-redemptive covenant—that is, a covenant made with all creation and all humans, whether redeemed or not. Still, the covenant with Noah is indirectly redemptive since it preserves the created order God plans to redeem (36).

For my money, this chapter (along with Schreiner’s treatment of the new covenant) are the strongest in the book. A couple of his conclusions merit attention. First, he argues the Abrahamic covenant has both conditional and unconditional elements:

The covenant promises will most certainly be realized . . . for God stakes his own life on the fulfillment of the promises [Gen. 15:7; 22:15]. At the same time, only those who believe and obey will experience the blessings of the covenant. . . . God will see to it, by virtue of his grace, that some will keep what the covenant demands. . . . [But] ultimately, the only true child of Abraham is Jesus Christ (Gal. 3:16), for he is the only one who was completely obedient to God. . . . The covenant with Abraham is unconditional, for it is guaranteed by Jesus Christ, the obedient one. (55–56)

Second, Schreiner argues that the genealogical, nationalistic element of the Abrahamic covenant doesn’t continue under the new covenant (50). More on this point in a moment.

Two things deserve mention in Schreiner’s treatment of the Sinai covenant. First, he notes its connection to the Abrahamic covenant (60–61). God saved Israel from Egypt because he remembered his covenant with their forefathers. Second, though Schreiner stresses the graciousness of this covenant more than some others do, his conclusion is measured: “The Mosaic covenant was a gracious covenant, but the Lord didn’t provide Israel with the moral ability to keep its requirements” (70). In the end, it had a “built-in obsolescence. It was not intended to last forever” (68).

Here Schreiner helpfully highlights the connection of the Davidic covenant to previous covenants, as the Davidic king fulfills the ruling role of Adam, secures the blessings of Abraham, and brings the Mosaic Law to its fruition (87). As with the Abrahamic covenant, the Davidic covenant has conditional elements, which are ultimately fulfilled by Jesus Christ, the royal Son of David.

If you could only read one chapter in the book, this should be it. Not only because it’s the best, but because the climactic nature of the new covenant enables Schreiner to show how it fulfills all the previous covenants. His topics contain the usual suspects: renewal of heart, forgiveness of sin, and the new exodus, but the section on how the new covenant reunifies Israel and Judah (Ezek. 37) was both unexpected and insightful.

Up to this point in the series it hasn’t mattered whether the author was a paedobaptist or a credobaptist. But in this chapter a theologian can’t avoid tipping his or her hand (nor would a good one wish to). Spoiler alert: Schreiner doesn’t teach at The Southern Presbyterian Theological Seminary. His argument that a credobaptist view of the new covenant better fits an inaugurated eschatology framework, which both sides usually accept, is especially strong (95). Schreiner breaks no new ground as far credobaptist covenantal arguments go, but he restates the standard ones admirably, and gives paedo-brothers worthy material to spar with.

While I’m on the subject of sparring: Schreiner writes from the position of “new covenant theology,” but Baptists (like myself) who hold a more classical Baptist covenant theology won’t find much to disagree with in this book. If anything, they may be pleasantly surprised how close Schreiner comes to them on the covenant of creation.

On a subject so fraught with disagreement, no book can be a one-stop shop. But Schreiner has provided the church with a solid starting point.