Many of the earliest Christian texts claim that Jesus of Nazareth is the creator of the universe and thereby include Jesus within the divine identity. That is undisputedly accurate. The origins, however, of this prevalent early Christian belief are more controversial and enigmatic. In Christ as Creator: Origins of a New Testament Doctrine Sean McDonough, professor at Gordon-Conwell Theological Seminary, attempts “to reconstruct the theological framework within which such an extraordinary assertion could be made” (2). McDonough is emphatic that the most valuable pieces of evidence for reconstructing this framework are not antecedent religio-philosophical concepts (e.g., Wisdom or Logos) but are, rather, the early Church’s memories of Jesus. It is Jesus who defines these prior theological concepts and not the other way around. Simply to amass “background texts” as parallels fails to understand that these texts (as well as the NT claim that Christ is creator) arise out of particular intellectual systems. Therefore these writings “must first be read against the background of the religious community in which they emerged” (13).

McDonough examines whether the church’s memories of Jesus lend any evidence for his role as an agent of creation. McDonough notes that many of the healings in the Synoptics present Jesus as the Creator God’s agent who restores creation to its intended order (e.g., Mark 1:40–45; Luke 13:10–17). Likewise, the exorcisms demonstrate that Jesus can control supernatural chaos and the most threatening elements of the created order (e.g., Luke 8:26–39; Mark 9:14–29). John’s Gospel also remembers Jesus as God’s agent of creation (John 1:3). Jesus controls the natural order as he turns water into wine (John 2:1–11); he is the “light of the world” (John 8:12; cf. Gen. 1:3); and he gives life to the dead (John 5:28–29; 11:1–44). The church’s memories of Jesus, therefore, provide serious hints for associating him as an agent of creation. But an even more important impetus for associating Christ as creator is the commonly found nexus in antiquity between redemption and creation or, to state it differently, between cosmic order and social order. McDonough examines in some detail the biblical and cultural assumption that connects creation with redemption. And the NT texts provide abundant evidence that belief in Jesus’ agency in creation resulted from their belief that Jesus is God’s definitive agent in redemption (see John 1:3, 10, 12; 1 Cor. 8:6; Col 1:16, 20; Heb. 1:2–3).

Yet the primary impetus for claiming Jesus as the agent of creation is his messianic status: “Creation marks the beginning of his messianic dominion; he rules the world he made” (65). As God’s anointed King (e.g., Pss. 2 and 110), as the one entrusted with the task of acting on God’s behalf, the Father grants Jesus the task of creating the universe. McDonough notes that all of the texts that present Jesus as creator “focus on the theme of messianic lordship” (68). Thus, to affirm that the Messiah created the world logically extends his universal lordship over the created order. The OT used the categories of Word, Spirit, Wisdom, and glory to communicate God’s creation of, and presence with, the world. The early Christians affirmed that Jesus as Messiah had these attributes that made the creation of the world possible. Messiah Jesus had God’s Word (Ps. 33; John 1:1–2), God’s Spirit (Isa. 61:1; Luke 4:18–19), and God’s Wisdom (Prov. 8; Col. 2:3)—precisely God’s own creative qualities. Thus, the confession that Jesus was creator arose out of this scriptural messianic matrix and the early Christians’ experience of Jesus as the Messiah. 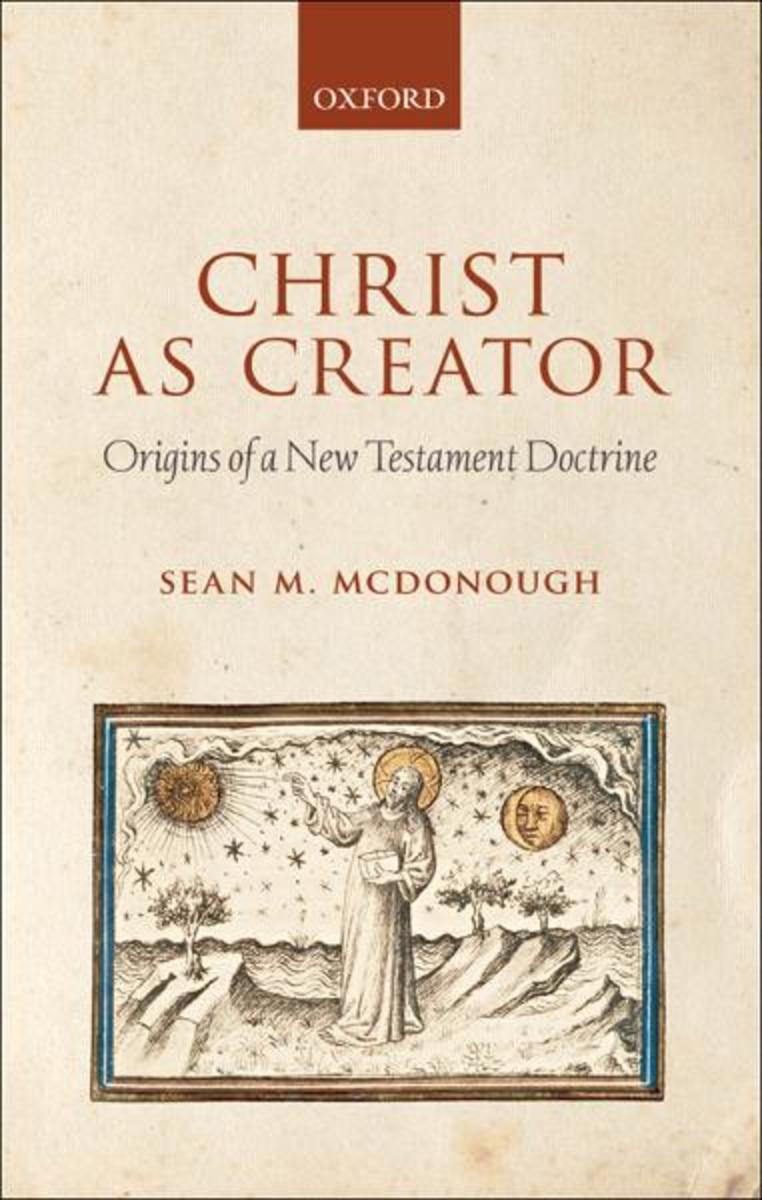 This book examines the New Testament teaching that Christ was the one through whom God made the world. While scholars usually interpret this doctrine as arising from the equation of Jesus and the Wisdom of God, Sean McDonough argues that it had its roots in the church’s memories of Jesus’ miracles. These memories, coupled with the experience of spiritual renewal in the early church, established Jesus as the definitive agent of God’s new creation in the New Testament writings and the teachings of the Early Church.

Chapters 5–6 examine how the claim that Christ was creator related to the Hellenistic context in which it emerged. McDonough does not think that Greek philosophy influenced the Johannine “Logos” or “the Image” of Col 1. The NT authors have no interest, for example, in exploring the process of creation. McDonough argues that the Greek views on creation, a few exceptions aside, tended to focus more on an impersonal force as the agent of creation. And the problem of God’s transcendence and his connection to the created world was not a problem unique to the Greeks. There is for McDonough then no clear reason that the NT authors should engage Greek thought on its own terms. McDonough also disputes the idea that Philo contributed directly to the belief in Jesus as creator. The philosophical thought-world of Philo and the messianic thought-world of the NT writings are worlds apart from each other. The former rejects any conception of God as directly involved with the world, whereas the latter affirm a God so involved with the world that he sent his Son to it.

The final major section of the book (encompassing chs. 7–10) is devoted to exegeting the primary NT passages that relate to Christ’s role in creating the world. In 1 Cor. 8–10, Paul argues that the Messiah and not demons is the mediator between the divine and human worlds. McDonough demonstrates that in antiquity idols, or the demons who stand behind them, were seen as offering a connection with the divine world. Paul’s claim that God created all things through Christ in 1 Cor. 8:6 is the basis for humanity’s exclusive worship of the Messiah. First Corinthians 8:6 “is Paul’s way of saying that the Messiah has always been God’s means of mediating his presence to the world” (168). McDonough argues that Col. 1:15–20 provides the clearest evidence for the belief that Jesus is the agent of both creation and re-creation. This text demonstrates that the doctrine of Christ as creator developed out of his role in redemption. The prepositional theology of the hymn (phrases such as “in him,” “through him,” and “for him”) is reminiscent of Hellenistic philosophical speculation, but it is unlikely that the hymn was influenced in any meaningful way by it. McDonough’s exegesis of Heb. 1:1–14 strongly supports his argument that the doctrine of Christ as creator developed out of a messianic matrix of scriptural interpretation. He suggests that Heb. 1:2 and 2:5–10 affirm that Christ is even the creator of the world to come. With respect to John 1:1, McDonough notes that there is no necessary reason to look for a prior hypostatic principle that has influenced John’s Logos. According to the Fourth Gospel, Jesus’ very words prove that he shares the divine identity. The best means of capturing the union of the Son and the Father is “in the concept of God’s creative speaking, a comprehensive term for God’s self-expression to the world” (214). As the narrative unfolds, the Son continually reveals the Father through his words.

McDonough’s Christ as Creator is a valuable resource for all students of the NT since the study interacts with a breadth of NT writings. McDonough joins the ranks of the likes of Richard Bauckham, Larry Hurtado, and others in his insistence on Jesus’ Messiahship as the fundamental category for understanding NT Christology. His primary thesis, that the affirmation of Jesus as creator emerged in a context of messianic reflection, is convincing and represents an alternative to those who would argue that it derived out of Jewish wisdom speculation. McDonough’s methodological privileging of the NT texts as well as the early church’s actual experience of Jesus over antecedent religious texts is a healthy corrective to much NT scholarship. Only two minor critiques emerged in my reading. First, McDonough’s argument could have been enhanced had he been more forthright in the structure of the chapters (see, however, the comments on 14–15). Essentially, the book unfolds in four parts: chapters 1–4 set forth the hermeneutical dynamics that led to the belief that Christ was creator; chapters 5–6 are devoted to the doctrine of creation in the Hellenistic context; chapters 7–10 examine the NT writings that refer to Christ as creator; and chapters 11 concludes the book with some theological reflections. It is a small quibble, but the clarity and flow of McDonough’s argument would have been improved had he further explained the logic of the ordering of the chapters. Second, McDonough’s work strongly critiques those who would account for the development of the doctrine through Jewish wisdom speculation, but he too quickly passes over certain significant texts with little or no comment. For example, more interaction with such texts as Luke 7:35/Matt. 11:19, Luke 11:49, and Matt. 11:27 would have been welcome (see 38–40). These critiques are minor, however, and I heartily recommend this book both for NT and theology students alike.

Joshua Jipp has taught New Testament in a variety of settings, including as a Teaching Fellow at TEDS, before joining the faculty at Trinity. He enjoys baseball, basketball, walking/hiking outdoors, and spending time with his wife, Amber, and their two sons.

3 Sipping Poison Won’t Make You Wise (Take My Word for It!)

5 Christians Are Not Immune to Conspiracy Theories