There are a lot of great books on the trustworthiness of the Bible. Some tend to be on the academic side, demonstrating the historical reliability of the Scriptures, the formation of the canon, and so on. Others are more devotional in nature, designed to edify and encourage believers as they seek to deepen their confidence in this all-important book.

Such approaches are good and helpful, but many Christians likely want something more direct and to the point. This is what Barry Cooper offers in Can I Really Trust the Bible? And Other Questions About Scripture, Truth, and How God Speaks, the latest installment in The Good Book Company’s Questions Christians Ask series. Over the course of five chapters, Cooper, director of product development at Christianity Explored, offers compelling answers to three questions:

These questions are essential to any serious study of the nature of Scripture. If the Bible does not claim to be, seem to be, or prove to be God’s Word—if it doesn’t hold up to scrutiny, in other words—then we must reject the notion of it really being God’s Word. If it’s a duck, we cannot call it a swan. We are wise, then, to consider what Scripture says about itself in order to verify its character. 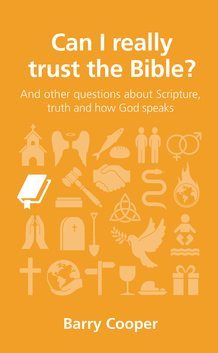 Can I Really Trust the Bible? And Other Questions About Scripture, Truth, and How God Speaks

Can I Really Trust the Bible? And Other Questions About Scripture, Truth, and How God Speaks

The Bible makes big claims for itself. But do those claims stand up? Aren’t the stories just legends? Hasn’t the information been corrupted over time? Isn’t the Bible full of mistakes? And isn’t it culturally outdated? In this absorbing little book, Barry Cooper explores these questions––and many others––with warmth, wit and integrity.

Which, of course, leads to the common critique many Christians face—the charge of circular reasoning. An old college friend of mine loves to pull out this accusation. He believes it’s inappropriate to play the “Scripture is the Word of God because it says so” card. He thinks it’s cheating. And I understand why. It is suspicious, particularly to the skeptic. And to some ears, it has the same rhetorical force as namedropping Hitler or insinuating one is a homophobe. If you want to kill a conversation with some skeptics, this is the way to do it.

Yet when you think about it, Cooper notes, “it’s impossible for any of us to avoid this kind of circularity in our arguments: we all appeal to authority of one kind or another, even when we don’t realize it.” He continues:

If I say, “The Bible is my highest authority because it can be proved rationally,” the argument would be self-defeating. I’d be appealing to an authority other than the Bible (rationalism), implying that it (and not God’s Word) was the real measure of trustworthiness.

If we’re honest about our use of circular logic—even while appealing to outside evidence, which we’ll get to in a moment—where does this leave us with the non-Christian? More or less in the same place as before. However, one significant difference is that when we’ve put our circular logic on the table, we’re actually better positioned to speak meaningfully about the secondary evidence.

This doesn’t mean, though, that appeals to outside evidence are invalid. For example, one common challenge today concerns whether we can know for sure what the original scriptural manuscripts said. If we can’t, some assume, then we’re left without any solid confidence that what we read in the Bible is what the authors wrote. But the embarrassment of riches we have in the form of ancient manuscripts—some dating to within just a few decades of the events described—are a compelling display of how God’s people have faithfully maintained the message after all. Cooper writes:

Although we no longer have access to the original biblical documents, all is not lost. The truly enormous number of surviving copies enables experts to reconstruct the original with great accuracy. This process of comparing copies is called textual criticism, and as a result, scholars are able to say: “For over 99 percent of the words of the Bible, we know what the original manuscript said.”

It’s appropriate to mention such evidence, not as a “gotcha,” but to help illustrate the point: if early Christians didn’t believe the Bible is God’s Word, why would they have been so meticulous in making copies that the variations affect no major doctrine of the faith? (Most are limited to things like typos.) Evidence of this sort doesn’t prove the point, of course, but it does lend additional credibility to the claims the Bible itself makes.

Those who’ve read extensively on this subject should be aware they’re unlikely to find much that’s brand new in this book. Still, the arguments are as solid as what you’ll find in Kevin DeYoung’s Taking God at His Word (Crossway, 2014) [20 quotes | interview | review), R. C. Sproul’s Can I Trust the Bible? (Reformation Trust, 2009), or Michael Kruger’s Canon Revisited (Crossway, 2012) [review].

While Cooper may not break new ground, Can I Really Trust the Bible? is a refreshing and encouraging read that would be superb to share with those looking to explore this vital topic.

Aaron Armstrong is the brand manager of The Gospel Project, author of several books including Epic: The Story that Changed the World, and screenwriter of the award-winning documentary Luther: The Life and Legacy of the German Reformer. You can follow him on Twitter.