How do you find God? So much hangs on that question.

According to Jonathan Fisk, pastor of Bethany Lutheran Church in Naperville, Illinois, Christians find God in God’s Word. To be sure, many have attempted to find God in other ways, but such attempts always produce a counterfeit Christianity. And those who embrace these counterfeits eventually find they have a “broken” faith.

The seven rules Fisk encourages readers to break in Broken: 7 ‘Christian’ Rules That Every Christian Ought to Break as Often as Possible represent variations on the lie that “God wants you to find him somewhere other than his Word” (17).

You will find God in your heart,
in the works of your hands,
in your mind,
in the world,
in the perfect church,
in God’s absence.

By other names, these lies represent mysticism, moralism, rationalism, prosperity, spirituality, and lawlessness. The seventh and final “rule to break” draws on the common thread running through them all: that you can find God. Fisk calls this assumption the “ever-Lie” of all counterfeit Christianity (233).

Just about every Christian (or anti-Christian) idea in the book is personified or transposed into some kind of metaphor, often to a positive effect. But sometimes Fisk gets a little carried away. For example, referring to the state of the church in Western society, he writes:

She tried really hard. She bought some new clothes. She learned a few dance moves. But is she attracting a crowd because she’s really the life of the party, or is she just drunk? It’s hard to tell. (15) 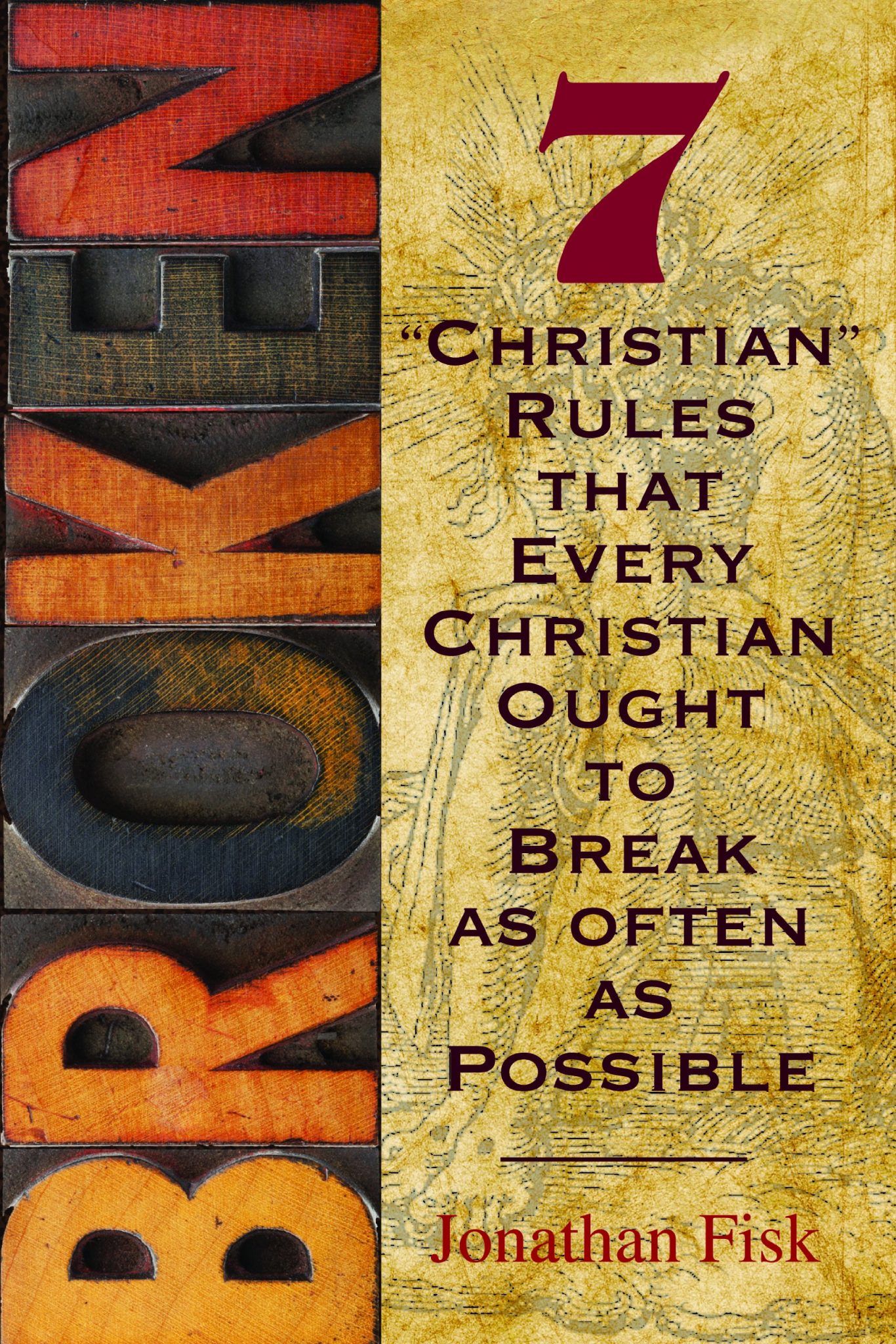 It’s helpful to remember Fisk’s intended audience, though I’m sure he anticipates a broader one will listen in. Fisk develops a character named Punk Rock John in the opening pages, someone who was ostracized by the church and has since lost his way. “For all you Punk Rock Johns out there who aren’t sure how much longer you can hold on,” Fisk writes, “hang on for one more round. This book is written for you” (22).

Though this target may not give Fisk a pass on mocking Christ’s bride, reading through the eyes of Punk Rock John might help non-Punk Rock Johns to read more charitably. Fisk gives Punk Rock John (and later Emo Dan, Scientific Sally, and Genuine Barb) a disturbing preview of the path they’re on. It’s a lot to think about—especially if you discover you’re one of them. Fisk brings these thoughts to life.

Unfortunately, there is also a lot missing in the book.

I don’t believe in baptismal regeneration, a “true presence” in the Lord’s Supper, or a hard dichotomy between law and gospel (37, 126, 104-05). But I’m a Baptist, and Fisk is a Lutheran. It’s pretty standard for Lutherans to embrace these teachings and for Baptists the reject them. So no surprises there. What is surprising, however, are these three topics Fisk does not develop in discussing what it means to be a Christian.

Christians grow, not just instantly—when they pass from this life to the next—but here and now. Fisk is right to call attention to indwelling sin and to emphasize believers will never be free of its presence in their mortal bodies. But he’s wrong to ignore the fact Christians grow in the grace and knowledge of Jesus Christ in this life. God’s grace gives power over sin. The pursuit of holiness is a real pursuit. Christians will always struggle with sin in this life, but they’re also miraculously free to not sin. And exercising this freedom brings glory to God. This is an important component of God’s grace.

The Bible tells Christians to do things. There are moral imperatives that come with being a Christian. If you doubt this obligation, read the second half of each of Paul’s epistles. Telling Christians to do things isn’t the gospel stepping into moralism’s shadow. On the contrary, when the apostle calls believers to certain behaviors, it’s always after reminding them of who they are in Christ. When a child of God hears a moral imperative from the Scriptures, then, he doesn’t hear “Do this to be a Christian”; he hears “You’re a Christian, so do this.” Obedience to Christ is the mark of a Christian; Fisk, however, never makes this point.

At the beginning of the book, Fisk calls Punk Rock John a “good kid” four times in three pages. Later, he reverses this declaration in light of a deeper understanding of human sin. I hoped for a similar reversal regarding Fisk’s negative view of the church. But that reversal never came. Instead, he couples pragmatic church polity with nuanced spiritual individualism.

To be sure, we ought to organize the churches in whatever manner best keeps us from forgetting that. If the needs or effectiveness of the structure change from time to time or place to place, it is neither the end nor the future of the church. It is the present. (182-83)

I would encourage readers to be charitable, to be humble, but also to be careful when approaching this book.

When Punk Rock John becomes a Christian, the beauty is he’s really no longer “Punk Rock” John. He can be Punk Rock John, but he doesn’t have to be. The Christian’s primary identity is in Christ, and Christians are known by their love for one another, not by their personal preferences. I admire Fisk’s compassion for a particular category of people, but at the end of the day, when Punk Rock John becomes a Christian, he’s a changed man. He praises God, fights sin, pursues righteousness, seeks fellowship with other believers, and learns to have the same love and forgiveness for others that Christ has shown him—even for people who don’t love him well in return.

Broken does a great job of exposing false gospels, but also tends to underestimate the power of the true one.

David Snyder is a member at Guilford Baptist Church in Sterling, Virginia. He has an MDiv from the Southern Baptist Theological Seminary and is preparing for church ministry overseas.