Next year will mark the 500th anniversary of the Reformation. Amid the festivity, many will be pondering the popular criticisms against Protestantism. The likes of Brad Gregory, Richard Popkin, Hans Boersma, Peter Leithart, and Christian Smith have all leveled serious critiques of the Reformation’s consequences.

Most of these appraisals swirl around the principles of sola scriptura, the priesthood of all believers, and the unity of the church. Did the solas produce schism, secularization, and skepticism wherein every individual is his own pope?

In his new book, Biblical Authority After Babel: Retrieving the Solas in the Spirit of Mere Protestant Christianity, Kevin Vanhoozer seeks to suture the bleeding of Protestantism so that it can grow into mature adulthood, rather than being stunted by these critiques. He does so by retrieving all five Reformation solas, which he thinks address the contemporary problem of “pervasive interpretive pluralism.”

By retrieving the solas, he argues, we can retrieve the final principle of the Reformation—catholicity. “What first appears to be the poison of Protestantism (a cause of solitariness) proves upon further inspection, and retrieval, to be the cure (a cause of salutariness)” (26). The solas allow us to create a virtual sixth sola—sola ecclesia—where it’s understood that the church alone is the place where Christ rules his kingdom and gives gifts for building his living temple.

Vanhoozer—research professor of systematic theology at Trinity Evangelical Divinity School—starts by arguing that we must take the solas together (rather than individually) in order to recover this catholicity. They’re not “substitutes for creedal orthodoxy but its servants” (28), enabling Protestant unity on theological essentials with genuine fellowship despite secondary doctrinal differences.

Each engagement with a sola deserves its own attention.

This doctrine addresses the charge of secularization by providing guardrails for the all-embracing economy of revelation. Sola gratia isn’t just about the nature of salvation, but about the nature of God. As the late John Webster has said, “Salvation comes from the Trinity, happens through the Trinity, and brings us home to the Trinity” (51). Sola gratia, therefore, locates biblical interpreters in an all-encompassing economy of triune communicative activity. Protestants may disagree about particulars, but not to the point that they change the story. So grace alone rebuts secularization by locating us within the triune God’s saving action. 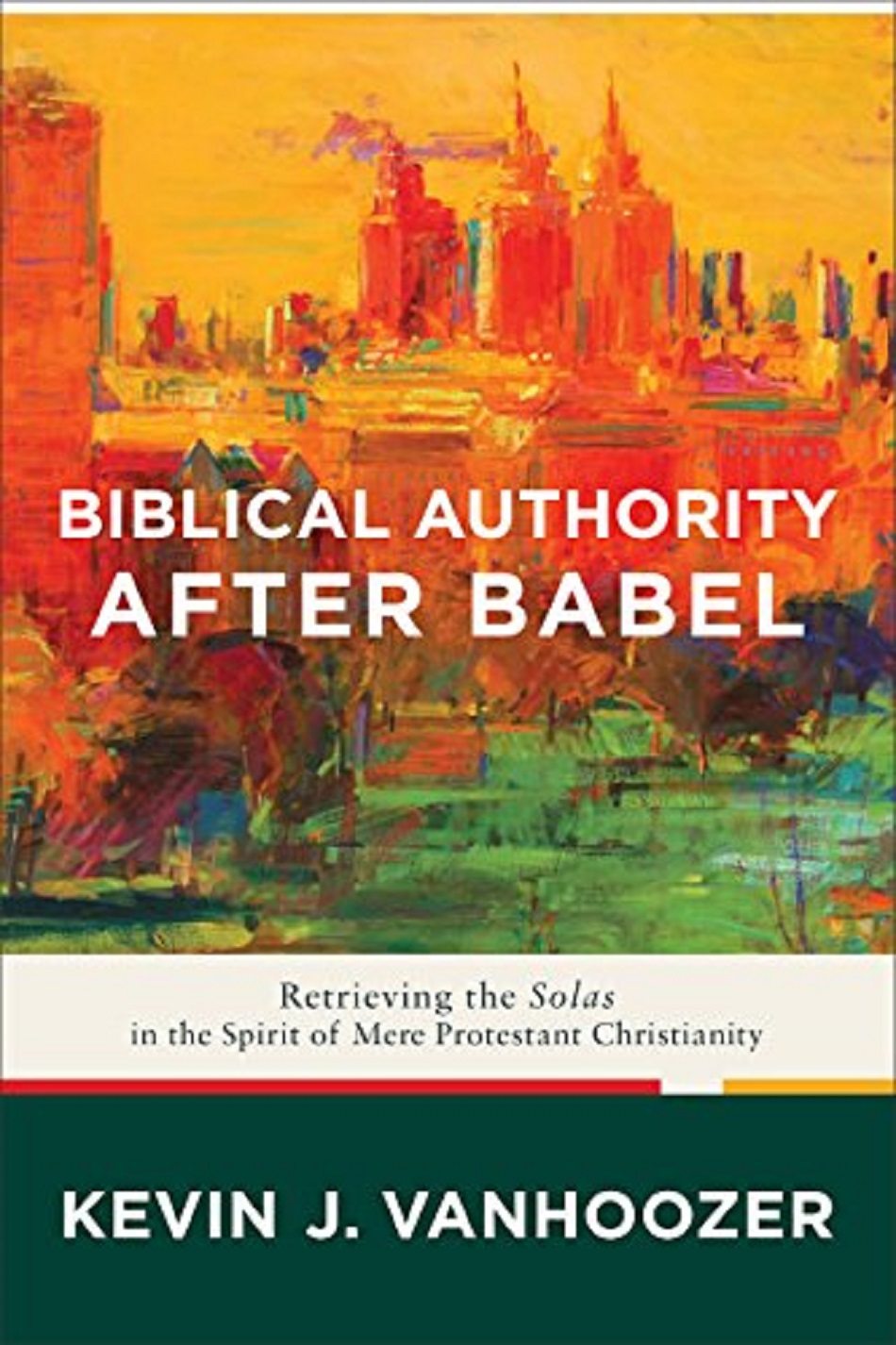 Biblical Authority After Babel: Retrieving the Solas in the Spirit of Mere Protestant Christianity

Biblical Authority After Babel: Retrieving the Solas in the Spirit of Mere Protestant Christianity

If grace alone rebuts the charge of secularization, faith alone answers the charge of skepticism—the crisis of knowing (epistemology). Sola fide doesn’t bless the rights of private judgment in interpretation; rather, faith unites one, by the Spirit, to Christ. And because God has created men and women as social beings who learn from others (think faith), we’re to trust the word of others. This means our approach to Scripture must be rational, humble, and grounded. We have a warranted epistemic trust in biblical testimony because we have faith in God. The Reformation didn’t give us epistemological skepticism, but epistemic trust.

A popular narrative is that sola scriptura turned out to be a divider rather than a uniter. But the Reformers didn’t mean for this doctrine to produce individualistic interpretations; their aim was actually the opposite. The principle asserted something everyone could agree on: Scripture is the primary or supreme (but not only) authority in theology. Even the principle “Scripture interprets Scripture” wasn’t meant to imply the Bible doesn’t need human interpreters (116). Sola scriptura doesn’t reject tradition; it places it in proper perspective:

The Reformers’ main objection to Roman Catholicism was not its catholicity but its centeredness on Rome. The Reformers believed that they were more in line than Rome when it came to tradition, for they (the Reformers) believed what the early church believed about tradition. (136)

So sola scriptura, rightly understood, isn’t a recipe for sectarianism or schism but a call to listen for the Holy Spirit speaking in the history of Scripture’s interpretation in the church.

Vanhoozer looks at the doctrine of “in Christ alone” and draws a beeline to the church. Solus Christus doesn’t mean Christ is independent of the church; rather, like sola Scriptura, it relocates and redefines the priestly office of the church. Indeed, it implies the priesthood of all believers. Vanhoozer opposes Roman Catholic ecclesiology (totus Christus), the Christless congregation (secular church), the congregationless Christ (dispensable church), and advocates for a royal priesthood of believers. The solas add up to the royal priesthood of believers—not an individualistic doctrine but a corporate reference to gathered individuals. Rather than negating community, then, “Christ alone” necessitates community.

5. Soli Deo Gloria (For the Glory of God Alone)

The last sola Vanhoozer addresses is soli Deo gloria, which states that we work for God’s glory, not human glory. Vanhoozer ties this sola to unity and the Lord’s Supper. He argues there are three approaches to unity: (1) ecumenicism, (2) sectarianism, and (3) denominationalism. Though most assume unity (category one) is all positive, there can be ungodly unity. Likewise, some divisions are godly, whereas others are not. What we need isn’t radical denominationalism but strong denominationalism where the gospel is contextualized for each situation, yielding lasting insights into the nature of the gospel itself. There can be both a communion in churches and a communion between churches (191). We need more Christians committed, then, to the idea of catholicity for the glory of God. This doesn’t imply a lack of division, but divisions that serve the gospel and unity among different churches.

Vanhoozer’s argument is tight, and his writing is dense and sometimes dizzying. The chart below might be helpful to visualize how he organizes his chapters and argument. What he proposes is a “Mere Protestant Christianity” that recognizes its own catholicity.

Online reviews usually tip toward shorter summaries and longer interactions. But I thought it was necessary for a book of such complexity as Biblical Authority After Babel to receive a more comprehensive overview. If nothing else, I hope this review gives a framework for approaching the book.

In some respects, the book simply takes the charges against sola scriptura and the priesthood of believers and makes sure they can play nicely with sola ecclesia. Can all of these solas get along with a high view of the church? Will they interact without chopping off each other’s legs?

In this, Vanhoozer succeeds. He pushes Protestants to think more carefully about the role and nature of the church in communication with these doctrines as a unified whole, not individually. He helpfully brings all the other solas into the conversational orbit. In my opinion, Vanhoozer ably proves there doesn’t have to be a contradiction between a high view of the church, church tradition, and the Reformational solas. In sum, he makes a strong case for Protestants as convictional conciliarists.

But does he convince those who critique Protestantism for secularization, schism, and skepticism? Those already cemented in another narrative will perhaps not be moved by this book. But those still discovering how to put these things together (who advocate for unity, have a high view of the church, and also affirm the five solas) will find much comfort. Given the nature of discussion surrounding Protestantism, then, Biblical Authority After Babel is a necessary and timely book.

Is He Actually Talking About the Solas?

Although Vanhoozer makes a strong argument, he seems to morph each sola to fit his argument. He quickly leaves the trajectory of each sola to talk about something else. His brief sections on what the Reformers meant serve as jumping-off points more than anything. For example, at one point he simply states: “Calvin calls the church the ‘society of Christ,’ and this may be enough to justify my treating of ecclesiology under solus Christus.” I for one underlined this line and made a note in the margin to the tune of it “not justifying the move.”

Sola gratia turns into a discussion of the Trinity. Sola fide curves into a discussion of the testimony of Scripture. Sola Scriptura basically affirms the role of tradition. Solus Christus transforms into the church’s authority. And soli Deo gloria magically becomes a discussion about denominations. Admittedly, some of these acquaintances are more convincing than others, but readers may wonder if he’s still talking about the same doctrine listed bold and center at the outset of each chapter.

To be fair, Vanhoozer admits retrieving these doctrines means more than recounting their history; we also must make them contemporary. He wants the doctrines to interact, not to be viewed in isolation.

While viewing the solas in an entire doctrinal system, the system Vanhoozer proposed is very Vanhoozer-ish. I personally resonated with it, but those outside the theological interpretation of Scripture (TIS) camp might have more questions. One rises to the surface: “Does presenting the solas through one’s own particular theological and epistemological grid confirm or rebut Vanhoozer’s argument?”

A thought experiment might help. What if fundamentalists were to present the five solas through their own grid? Doesn’t this prove the plurality Vanhoozer argues against? Or does Vanhoozer sufficiently ground his arguments in history, Scripture, reason, and doctrine? That’s an answer (in the spirit of Vanhoozer’s book) I can’t answer alone. We must let the Christian community decide whether he succeeds, and I’m eager to see forthcoming reviews whereby our royal priesthood is put into practice.

For Such a Time as This

So did the Reformers produce secularization by rejecting a hierarchical worldview of late-medieval Christianity and replacing it with the flattened-out world of sola scriptura? Has Protestantism fashioned schism rather than unity with its myriad denominations? Did the Reformers beget skepticism with appeals to conscience rather than authority? And has the Reformation rendered any interpretation valid by legitimizing every individual as an authoritative interpreter?

I don’t think Vanhoozer assumes Biblical Authority After Babel will dismiss all criticisms of Protestantism. Nevertheless, the book provides a cogent response to those who see wisdom in the solas yet are also concerned about schism, secularism, and skepticism. Maybe Vanhoozer was put here for such a time as this.

2 Assume You Are Wrong