Mark Batterson is the lead pastor of National Community Church in Washington, D.C. His All In: You Are One Decision Away From a Totally Different Life follows closely on the heels of his earlier The Circle Maker, which he refers to as this book’s prequel (18). The Circle Maker was a call for boldness in prayer, drawing on the image of the Israelites surrounding Jericho as a metaphor for targeted, strategic praying. All In, written in the same readable style, is a call for wholehearted obedience, drawing on a number of biblical images (typically one per chapter), such as Abraham sacrificing Isaac, Moses throwing down his staff, Elisha burning his plowing equipment, and so forth. A key word in the book is consecration, which Batterson defines as “going all in and all out for the All in All” (19, italics his). This sentence also structures the book’s chapters.

Though I think it could be strengthened in a few areas, All In is a welcome and needed challenge for comfortable, consumer-driven American Christianity.

A number of books over the last few years have called for some kind of “radical” obedience and discipleship, and Batterson’s book certainly fits in this genre. Some Christians have voiced concern over this kind of appeal, but it’s important to ask why calls for radicalism are striking a chord with so many. As far as I can tell, at least part of the answer is that this challenge is (1) thoroughly biblical and (2) desperately needed in our culture. Can it become trendy to attack comfortable Christianity? Sure. But that should not prevent us from identifying and appreciating the helpful aspects of this message. In the case of Batterson’s book, several biblical themes provide a strong theological foundation to his call for radicalism. 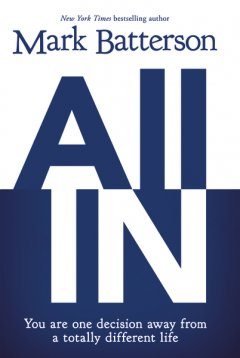 All In: You Are One Decision Away From a Totally Different Life

All In: You Are One Decision Away From a Totally Different Life

First, All In presents radical consecration as the only appropriate response to the glory of God. He writes, “Anything less than the complete surrender of our lives to the lordship of Jesus Christ is robbing God of the glory he demands and deserves” (24). Batterson emphasizes that God is an end, never a means (45), and that we must follow Jesus, not invite him to follow us (16). Second, Batterson portrays consecration as not mere self-denial, but ultimately the path of joy and life. So he argues, for example, that the key to self-fulfillment is self-denial, and the key to contentment is generosity (26). Third, Batterson situates his call for consecration as the fitting response to the riches of God’s grace: “[Grace] costs nothing, but it demands everything” (25). He articulates the gospel clearly several times in the book, (see his discussion of double imputation on page 25), and carefully distinguishes radicalism from legalism. At one point, for example, he stipulates, “Going all in means 100 percent reliance on the atoning work of Christ” (48, cf. 65).

Because Batterson situates his call for consecration in relation to God, heaven, and the gospel, I think the flavor of “radicalism” represented in this book is a thoroughly biblical and helpful one. I believe All In will serve readers well by challenging them toward greater surrender and obedience to Christ. The margins of my own copy are littered with the prayers and reflections it prompted.

Areas That Could Be Strengthened

There are three areas, however, where I think Batterson’s call for total consecration to Christ could be improved. The nuance required for these points requires me to spend more time on them, but I hope it’s clear my main reaction to this book is agreement and appreciation.

First, I wish Batterson had emphasized consecration as more of a continual process than a one-time, climactic decision. Throughout the book he makes appeals like “you are only one decision away from a totally different life” (18, 172), and “this is your moment. It’s all or nothing. It’s now or never” (32). One of his illustrations of “all in” obedience is a Union colonel leading a desperate charge at the Confederate army during the Civil War (35-36), while another commends the value of 20 seconds of insane courage (81-82). On the whole, the book’s tone sometimes feels like the closing talk on the final night of a youth summer camp.

In my view, consecration is more a matter of daily surrender, and slow growth in the process over years and decades. To be sure, there are often climactic turning points along the way. But we should be wary of painting consecration as a now-or-never, all-or-nothing reality. There are greater and lesser degrees of consecration in different Christians and different areas of their lives, but it’s shades of gray, not black and white. And no one is fully consecrated until glory.

Earlier in church history, some theologies of sanctification (which I believe sprang from genuine works of God) had the unfortunate consequence of dividing Christians into two different categories—the perfected in love versus the imperfect (Methodism), the baptized in the Spirit versus the unbaptized (second-blessing theology of classic Pentecostalism), the completely surrendered versus the unsurrendered (Keswick movement). While in the “radical” literature the contrast isn’t so stark, we need to be clear to avoid anything that can create a dichotomy between the really consecrated and the partially consecrated. The question we want people to ask is not, “Which kind of Christian am I?” but rather, “Where specifically is God calling me to grow right now?”

Second, I wish Batterson had more clearly articulated that consecration may take place in non-grandiose and non-spectacular arenas of life. At times, All In gives the impression that consecration is a thrilling, exciting adrenaline rush. For example, Batterson claims boredom is wrong, that “you cannot be in the will of God and bored at the same time. . . . The choice is yours—consecration or boredom? It’s one or the other” (20). Later he promises, “If you take a single Spirit-led step of faith in God’s direction, spiritual adrenaline will surge through your veins once again” (77).

My wife is a new mom right now. I think her level of consecration to Christ’s calling is amazing. Frankly, I don’t know how she does it. But losing so much sleep and changing so many diapers is not always exciting. There are times when she takes a step of obedience in getting out of bed at 3:00 a.m. to take care of our son, and I’m pretty sure there’s no surge of adrenaline. But she is just as “all in” as someone taking a more daring and exciting step of faith, because she’s being radically faithful to Christ’s calling on her life.

I bet Batterson would agree that my wife is “all in,” but sometimes his book—especially in its illustrations and tone—seems to underemphasize and underappreciate this kind of radicalism.

Third, I wish the book had displayed greater sensitivity to conscience-plagued Christians who wonder, Have I done enough? Am I really “all in” yet?” In chapter 4 of his spiritual autobiography Surprised by Joy, C. S. Lewis records what made his evening prayers as a boy so miserable:

One had no sooner reached “Amen” than [an internal voice] whispered, “Yes. But are you sure you were really thinking about what you said?”; then more subtly, “Were you, for example, thinking about it as well as you did last night?” The answer, for reasons I did not then understand, was nearly always No. “Very well,” said the voice, “hadn’t you, then, better try it over again?” And one obeyed; but of course with no assurance that the second attempt would be any better.

I think many Christians can relate to this experience in their spiritual life more generally. They don’t have an undersensitive conscience that needs to be pricked but an oversensitive conscience that needs balm. Their struggle isn’t getting off the couch; it’s getting off the performance treadmill. They don’t need to be challenged to go all in, but rather liberated by the realization that their approval in Christ doesn’t depend on their level of consecration. I think All In could provide more gospel help to such readers.

A contributing factor to this weakness is that the numerous biblical stories Batterson draws from seem somewhat hodgepodge, rather than rooted in a larger redemptive-historical context. I don’t think its wrong to use stories like Elisha burning his plowing equipment and Moses throwing down his staff as exemplary metaphors. But I think they’ll have more power when situated in relation to the larger story of which they’re a part, the story of God himself going “all in” for his people in the person of Christ. If God’s loving initiative at the cross had been a more consistent basis of motivation, the overall tone and appeal of the book might have proven more helpful to guilt-ridden readers. For example, the front flap (drawn from various passages throughout the book) opens: “If Jesus hung on a cross for us, the least we can do is carry our cross for him. And the good news is this: If you don’t hold out on God, God won’t hold out on you.”

The difference in tone and emphasis between these two appeals represents a larger pattern in which I think the book isn’t as sensitive as it could be to the weaker brother or sister. As a result, I’d probably give All In to the complacent Christian before I’d give it to the conscience-tormented Christian.