Does anything exist outside of time? Is it still intellectually responsible to believe in God?

Anthony Kronman proposes to settle these and other questions once and for all in his new book, After Disbelief: On Disenchantment, Disappointment , Eternity, and Joy. Kronman’s God is wholly original. God is, Kronman says, “the explanatory ground of everything that happens in time” (129). Like Kronman’s 2017 debate with Tim Keller, the book is a reminder that there’s a vast middle ground between religion and atheism. Its pages prompt readers to evaluate whether God is a transcendent Creator or a deity created—at least in part—in our own image.

According to Kronman, a law professor at Yale University and author of Education’s End, humans are distinct from other animals in the awareness of their mortality. If I know I will die, I’ve already made a distinction between what exists in time and what doesn’t. If I can recognize something unnatural or limiting in the concept of time, I can conceive of the idea of eternity. 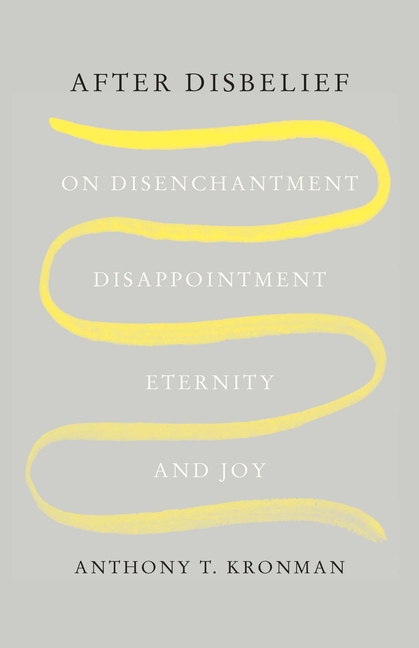 After Disbelief: On Disenchantment, Disappointment, Eternity, and Joy

After Disbelief: On Disenchantment, Disappointment, Eternity, and Joy

Many people of faith believe the meaning of life depends on our connection to an eternal order of some kind. Atheists deride this belief as a childish superstition.

In this wise and profound book, Anthony Kronman offers an alternative to these two entrenched positions, arguing that neither addresses the complexities of the human condition. We can never reach God, as religion promises, but cannot give up the longing to do so either. We are condemned by our nature to set goals we can neither abandon nor fulfill, yet paradoxically are able to approach more closely if we try. The human condition is one of inevitable disappointment tempered by moments of joy.

Christians can heartily agree with Kronman’s confession of eternity, which is rare for a person raised with anti-religious and anti-God dogma. He goes as far as to say that the longing for eternity is “a constituent element of our humanity, not an avertable threat to it—a feature, not a bug” (16). With Kronman, Christians affirm that God “has put eternity into man’s heart” (Eccles. 3:11).

The idea of eternity, Kronman says, fuels our pursuits of science, justice, and love. Because we can imagine what perfect justice looks like, we’re wired to pursue it. Yet because of our short lives, our goals are never fully realized and the perfect ideals are never attainable—leaving us in a state of what Kronman calls “deep disappointment” (67).

Way of Athens and Jerusalem

Humanity, argues Kronman, has dealt with this “deep disappointment” in two fundamentally different ways: the way of Athens and the way of Jerusalem. Athenian philosophers saw the external world as inherently intelligible: with the right circumstances and education, a person could fully understand the world in her lifetime.

The way of Jerusalem is characterized by epistemic humility. The world is infinitely intelligible: finite, created beings can never understand the world to the extent that the infinite Creator does. This may produce disappointment, but it’s resolved with the promise of union with the Creator in the afterlife. A person of faith still works to grow in knowledge of truth and still pursues justice, but he has the consolation that these longings will eventually be satisfied in the presence of the Creator who put those longings in our hearts in the first place.

The idea of eternity, Kronman says, fuels our pursuits of science, justice, and love.

For Kronman, these two paths are elaborate—and insufficient—ways to explain away “deep disappointment as a fixture of the human condition from which there is no escape” (101). Yet rather than dismiss both approaches, Kronman seeks to synthesize them. Like the pagan Aristotle, Kronman concedes that the world is inherently intelligible—and thus God cannot be a being who blocks a person’s pursuit of knowledge. Like the Christian Isaac Newton, however, Kronman admits the world is infinitely intelligible—and thus God cannot be fully comprehended in one’s lifetime.

By incorporating ideas from Athens and ideas from Jerusalem, Kronman’s After Disbelief is, among other things, an exercise in consumerist theology. Taking this kind of liberty is precisely the preferred theological approach of the growing number of “spiritual but not religious”—though it masks its problematic dimensions.

This isn’t to say it’s invalid as an intellectual exercise. Kronman, like all of us, forms his opinions from bits and pieces of what he’s read and experienced in his life and education. But when it comes to theology and ultimate questions, is this the best approach? Will truth about God be found when I’m the curator of it, assembling conclusions about existence and eternity based on my particular tastes and experiences? Or is truth more reliably found in the humbler work of submitting myself to what has already been believed, confessed, and established by a religious system over centuries? Is a “God” of my own making really the most satisfying one?

Kronman describes his anthropology and theology as a reconciliation of opposites. His idea of God is an abstract no-man’s-land between dogma and despair. It’s a balance between his mother’s hatred for religion and his own curiosity for God (12) and at other times—as noted above—the middle point between Jerusalem and Athens (101–2, 128).

In one sense we should welcome the curiosity that leads someone like Kronman on a theological quest like this. Rather than dismiss God, Kronman at least attempts to salvage a semblance of spirituality in a world where it’s easy to move past such old questions. He’s at least willing to enter the theological conversation, which for many today (especially those who harbor pain or resentment toward the church) is off the table. For Christians seeking to reach unbelievers or engage in apologetics, “after disbelief” is a better starting point than “entrenched disbelief.”

So as much as we’d want to steer someone away, eventually, from consumerist theology (helping them see how a personalized God-to-my-liking is unsatisfying, unreliable, and unstable), there’s a sense in which consumer theology is better than no theology. It’s a starting place. Wrestling with God is always better than outright rejection of him.

I admire Kronman’s desire to plumb truth from various traditions and schools of thought in which he’s conversed. It’s no small task to find the middle ground between the atheist, the Athenian philosopher, and the Christian, rejecting and accepting doctrines as one sees fit.

Still, while intellectual humility is good, and Kronman’s attempt to find a middle road between extremes is often helpful, Christians must be careful not to understand this mediating mode as an inherent, universal good. Not every question needs the “both sides” treatment, especially if one of the sides comes from outside the body of Christ. One can affirm all truth is God’s truth and at the same time acknowledge that God’s truth is usually better expressed by those who know him, especially when theology is in question.

For Christians seeking to reach unbelievers or engage in apologetics, ‘after disbelief’ is a better starting point than ‘entrenched disbelief.’

Even so, there’s value in listening to and engaging with different sides. A Christian can seek to synthesize ideas without the resulting philosophy always becoming squishy. We can consider alternate views or competing claims without always leading to compromise. Indeed, evangelism and apologetics in a secular, pluralistic society can benefit from Christians who manifest intellectual curiosity and eagerness to dialogue.

When Paul speaks to the Athenian philosophers at the Areopagus (Acts 17), he reasons with them and notices their “very religious” regard for the divine (v. 22) and their veneration of an “unknown god” (v. 23). Their worship stemmed from desires the Creator put inside of them so they’d find their way to him. Yet rather than finding the objects of their desires in created idols (which were everywhere in Athens, v. 16), Paul directed them to the one true God—the One “who made the world and everything in it” and “does not live in temples made by man” (v. 24).

While Paul distinguishes the Creator and the created in his teaching, Kronman’s After Disbelief seeks to synthesize the Creator and the created by constructing a conception of God from both biblical and pagan philosophical materials. While the quest for knowledge in the created realm can inspire fruitful ideas and explorations about God, this should never take precedence over God’s own self-revelation in Scripture. And while spirited speculations about God like this book are interesting and thought-provoking, they should ultimately remind us that the Bible is a theological singularity. Far from an “unknown god” or elusive deity, God has made himself known to us clearly in Scripture. This should be our primary, authoritative source as we understand who he is and who we are in relation to him.

We live in a moment where God’s Word is poised to intersect with an unbelieving world. May those who seek God truly find him through his mercy (Acts 17:27). May the church be keen to bring the light of the gospel to bear on the questions the world asks. And may belief follow after disbelief.

Matthew Jordan is a student at Biola University where he serves as the editorial assistant for The Scriptorium Daily, the faculty blog of the Torrey Honors College. He worships at Southlands Church in Brea, California. He blogs at Crossing the Jordan.