My husband and I adopted all four of our children. Our family’s racial profile checks off almost every affirmative action category. We have so many gene pools under one roof that we perplex even ourselves. Daily I homeschool one child with right-brained learning strengths and another with left-brain learning strengths. This means that by the end of the school day, I have no brain. God gave us two children when they were infants and two when they were 15 and 16 years old (and placed in our home five years apart). One son stood a foot taller than me when together we took our place before the judge to complete his adoption eight months after his 17th birthday. When we adopted teenagers out of the welfare state’s foster care program, one woman in my church community feared for the safety of my youngest children. I told her our adoption of older teenagers allows our younger children know that had we met them in foster care at 16, we too, with the Lord’s help, would have recognized them as our covenant children. Nothing preserves safety like knowing who your parents are—and knowing they recognize you across race, culture, and age. For my husband and me, adoption is not some consolation prize for my infertility; it is our Christian calling.

Liberals think I’m just another social justice advocate, adopting children to show my support of the welfare state. Quiver-fulls sometimes pity me because I couldn’t be a “real” mother to a child I carried in my womb. Darwinian evolutionists think working with all the bureaucracies to adopt children renders me nothing more than a glorified nanny to a group of kids doomed by biology and uncorrectable by environment. And at least one advocate of the Christian homeschool movement cautioned us against adopting older teens by declaring: “If you can’t spank them and can’t homeschool them, you can’t lead them to Jesus!”

That is, until 2010 when I read Russell Moore’s book Adopted for Life: The Priority of Adoption for Christian Families & Churches (Crossway, 2009).

And now, Moore has revised a key section of this book and published it as as a stand-alone booklet titled Adoption: What Joseph of Nazereth Can Teach Us About This Countercultural Choice (Crossway, 2015). It is a pastoral clarion call for what every fiber in my soul knows: adoption is neither social justice nor Christian charity. Adoption is Christian calling that puts spiritual warfare in full throttle. 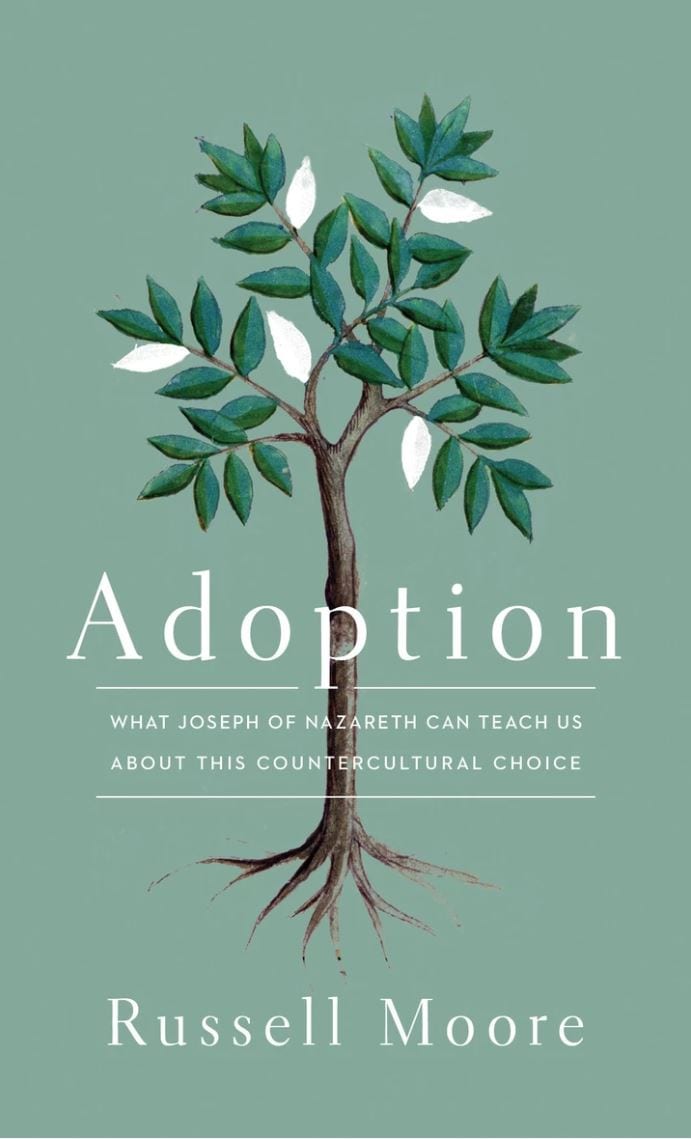 Adoption: What Joseph of Nazareth Can Teach Us About This Countercultural Choice

Adoption: What Joseph of Nazareth Can Teach Us About This Countercultural Choice

Theologically, adoption is a non-negotiable gospel principle, for no one comes to the Father as a natural-born child. Practically, adoption is the most despised gospel principle, because in our prideful self-agggrandizement we feel entitled to gospel grace. Somewhere in the crossfire of this are orphans, image bearers of a holy God, waiting for the people of God to show up.

First, Moore asks us to ponder Joseph, asking whether he’s the legitimate father of Jesus or just a shepherding usher who functions as a literary foil or placekeeper for the more important story to unfold. Moore walks us through these questions carefully, reminding us that by faith Joseph receives his pregnant fiancee as she is and believes she carries the Christ child in her womb. It might behoove us here to think through how radical and risky this really was. The ancients may not have not known about the germ theory, but they all knew how babies were born. Joseph acted in faith and against the chagrin and criticism of his peers.

Joseph is recorded in the annals of history and of the Bible as a real earthly father, as recorded in Luke 2:41 and 2:48. The real-ness of Joseph’s fatherhood of Jesus isn’t contained in a mere Christmas story about a poor baby born on a cold night in Bethlehem and placed in an animal’s food trough. As Moore points out, your salvation and mine depends on Joseph as a real father: “If Joseph is not ‘really’ the father of Jesus, you and I are going to hell. Jesus’s identity as the Christ, after all, is tied to his identity as the descendent of David, the legitimate heir to David’s throne” (28).

In the “Adoption and Spiritual Warfare” section, Moore makes clear there is—and has always been—a war against children, and Satan is leading the brigade and enlisting unwitting Christians to do his bidding. He writes, “There seems to be an orphan-making urge among us, whether we see it in the slave culture of centuries past or the divorce culture of today” (15). Moore goes on to demonstrate that Satan’s war against babies and children is consistent throughout biblical and world history. Citing both Herod’s and Pharaoh’s calls for genocide to protect their respective empires, Moore shows the ominous roots of Planned Parenthood and other leaders of the contemporary pragmatic movement who render children as mere inconveniences.

In addition, Joseph embodies the image of God by “rolling back the curse of fatherlessness” (32). In taking us through Joseph’s real and eponymous place in Jesus’s life (and yours and mine), Moore reveals that the Bible’s understanding of patriarchy has nothing to do with an abuse of power and everything to do with aiding and abetting the “least of these.” This point subtly and powerfully shows that children need both moms and dads; that gender is neither negotiable nor disposable; that fatherhood and motherhood are cosmically and practically sacrificial in gender-distinct ways; and that you cannot extract ideas of fidelity and fatherhood—ideas which protect children from orphanhood—from the biblical marriage of one man and one woman.

The weaving of biblical history into our own is one of the most significant things about Adoption. It teaches people how to think like Christians, and therefore how to think counterculturally about the norms and nuances of our daily life. Moore concludes:

The culture of adoption—where all are working in different ways to protect children and advocate for their adoption into biblical homes—is a credibility test for evangelism. And this credibility test is needed both for the church and for those who despise us. If churches were known as solid support systems for believing families who adopted all kinds of children (with all kinds of problems and issues)—if our churches were places where unwanted children became sons and daughters, and where both “unwanted” babies and the desperate women who carry them were claimed by us—then I’m certain the mouths of the lions would be supernaturally shut.

Adoption shows all believers how they have a vital role in a culture of adoption, because adopting children—and supporting those who do—is not about checking through a list of righteous deeds. It’s about knowing whose we are, and therefore, who we are. Seeing our place in the cosmological footsteps of Joseph and building from within the ranks of the church, a culture of adoption offers a “model for a new generation of Christians” (59).

We desperately need this. As the church today faces increasing hostility, we need to pursue peace and forgiveness, and to exercise spiritual gifts. And we need to be courageous and risk-taking in practicing before a watching world what pure and unadulterated religion really advocates (James 1:27).