The calling of God is both general, the gospel call that goes out indiscriminately to all, and particular, the effectual, spiritual call wherein the Father calls the elect to the Son through the power of the Holy Spirit.

The call of the gospel is both general and particular. The general call is the gospel preached indiscriminately, while the particular call is the inward, spiritual call of God to the elect that is simultaneous with regeneration. All those God has chosen in eternity are called particularly by God, and this call is effectual in its power and outcome. Through the call of God, a sinner’s heart is regenerated and her will is liberated; because of this, the effectual call logically precedes conversion, the exercising of faith in Christ. All those who are called in this way will be justified and, ultimately, glorified, and all of the glory goes to God who works this change in us by his call.

When we consider the scope of our salvation—what theologians call the ordo salutis, the order of salvation—where does it originate and what is its first point of departure? The answer is God’s call. Everything follows from God’s initial, saving, and effectual call of the unbeliever to Jesus Christ. Picture it this way, (taken from Matthew Barrett, 40 Questions About Salvation): 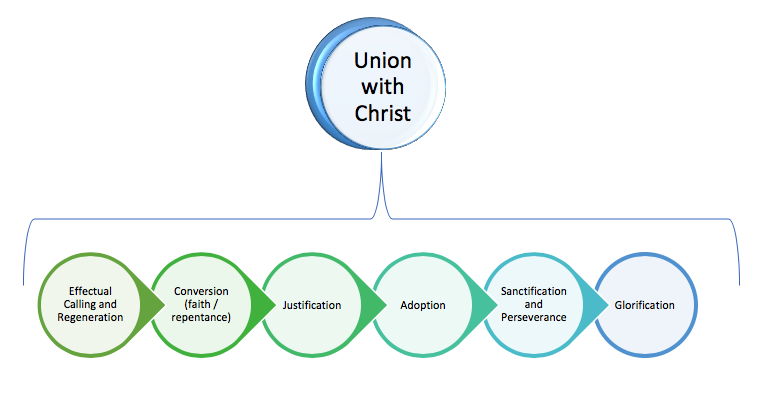 Puritans like William Perkins liked to refer to this order of salvation as the golden chain of salvation. Each link of the chain is inseparable from the next and together they form a chain that cannot be broken. God’s effective summons or call is the first link, sometimes spoken of synonymously with regeneration (the new birth), giving birth to everything that follows. In this call the Holy Spirit first unites the sinner to Jesus Christ; indeed, the sinner is called to Christ, so that he enjoys all the benefits of salvation found in Christ, including faith and repentance, a new righteous status (justification), adoption into the family of God, conformity to the image of Christ (sanctification), and one day glorification itself.

But to understanding God’s call it must be recognized from the start that there are two types of calling. First, there is the gospel call. This call is the gospel message proclaimed and extended to sinners. The gospel call is issued whenever Jesus Christ and him crucified and resurrected is preached from pulpits or shared in evangelistic conversations. This gospel call is indiscriminate, meant to be spread to anyone and everyone who will hear it. It knows no barriers but goes out freely and universally to all who will hear it. Hence it has sometimes been referred to as God’s general call. This gospel call also invites sinners to repent and trust in Christ (Matt. 11:28; Luke 14:23), promising that anyone who does will be forgiven and receive life everlasting, which only Christ himself can give.

For example, Christ proclaims to his hearers in Matthew 11:28, “Come to me, all who labor and are heavy laden, and I will give you rest.” And again, in John 7:37, “If anyone thirsts, let him come to me and drink.” It is this gospel call that so famously defines John 3:16, “For God so loved the world, that he gave his only Son, that whoever believes in him should not perish but have eternal life.”

This general, gospel call can, however, be resisted, and it is resisted by everyone who hears the gospel but does not believe in Christ. Stephen, just before he was martyred, said this much. “You stiff-necked people, uncircumcised in heart and ears, you always resist the Holy Spirit. As your fathers did, so do you” (Acts 7:51). This was not new with Stephen, however, for even Jesus experienced such rejection: “O Jerusalem, Jerusalem, the city that kills the prophets and stones those who are sent to it! How often would I have gathered your children together as a hen gathers her brood under her wings, and you would not!” (Matt. 23:37).

But this is not the only type of call Scripture describes. There is also an effectual call, or what is sometimes referred to as God’s special call. As the word is proclaimed (gospel call) and falls on the ears of its hearers, God works within the hearts of his elect, the Father calling them to his Son by the power of his Holy Spirit. Two components of this second type of call deserve attention.

First, this call is not universal but particular. God has chosen his elect in eternity, not on the basis of anything foreseen in them, not even faith. At the proper time, he calls those whom he has chosen to salvation in his Son, bringing to fulfillment what he decreed from all eternity. Unlike the gospel call, which goes out to all people, the effectual call is specific, taking place within the hearts of God’s elect alone. Like the wind, the Spirit “blows where it wishes, and you hear its sound, but you do not know where it comes from or where it goes,” says Jesus in John 3:8, highlighting the sovereignty of God.

Second, not only is this call particular to God’s elect but it is effectual in its power and outcome. In other words, God’s call of his elect does not fail. Just as his electing choice in eternity is not conditioned on the will of the sinner, so too is his special call not dependent on the will of the sinner. In fact, the sinner’s will is in bondage to sin (e.g., Rom. 8:7-8), and his engagement with the things of God is characterized by a spiritual inability.

But when he is effectually called and regenerated by God, his will is set free so that he can and will repent and trust in Christ. That means, then, that God’s effectual call, and with it regeneration itself, must logically precede conversion (faith and repentance) in the order of salvation. Until God calls his elect with an efficacious, omnipotent grace, they cannot, and they will not, believe.

Jesus has this effectual call in view in John 6. The Jews listening to him do not believe in him, no matter how many miracles he performs. They are spiritually blind, and though they think they are free, they live in bondage. They take offense at Jesus and start grumbling (like their forefathers in the wilderness) when Jesus says he is the “bread that came down from heaven” (6:41). Jesus responds, “Do not grumble among yourselves. No one can come to me unless the Father who sent me draws him” (6:43).

Jesus highlights (1) their inability to come to the Father, and (2) the efficacy of God’s call for no one can come unless drawn by the Father. That there is a predestinarian tone present in the words of Jesus is apparent in what Jesus said just prior to this point. “But I said to you that you have seen me and yet do not believe. All that the Father gives me will come to me, and whoever comes to me I will never cast out” (6:26–27). Notice, Jesus does not say “whoever will come to me the Father will give to me” but whoever the “Father gives me will come to me.” It is God’s electing choice that results in sinners coming to Jesus. Unless he draws the sinner, no sinner will come to Jesus at all. As Jesus will say yet again in John 6:65, when the Jews still do not believe in him, “This is why I told you that no one can come to me unless it is granted him by the Father.”

In light of John 6, it is no wonder theologians have labeled this call “effectual.” Man does no cooperate with God in this call (i.e., synergism), nor is man able to resist this call and defeat God’s grace—how could he when he is in spiritual bondage and death? Rather, this call is a summons that does not merely offer new life but creates new life within, much like Jesus’ powerful words: “Lazarus, come out!” (John 11:43). For that reason, this call is one that cannot and will not fail in its mission to bring God’s elect into union with Christ. It is effective. That is why some theologians have seen effectual calling and regeneration (new birth) as two sides of the same coin.

We learn about the effectual nature of this call not only from Jesus but from Paul. Actually, Paul assumes it everywhere. But just consider one example. In Rom 8:28-30, Paul writes,

But second, there is an unbreakable link or chain in Paul’s mind. God foreknew and predestined us in eternity, and then he called those whom he predestined. Those called are then justified, and those justified God also glorifies. Only if the call is effectual can Paul have such certainty that justification and glorification will follow.

The United Power of Word and Spirit

As a result, we take no credit for this call. All credit and glory must go to our triune God. If he did not summon us with his irresistible power, we would still be spiritually lost, intoxicated by the voice of that ancient serpent.

This essay is part of the Concise Theology series. All views expressed in this essay are those of the author. This essay is freely available under Creative Commons License with Attribution-ShareAlike, allowing users to share it in other mediums/formats and adapt/translate the content as long as an attribution link, indication of changes, and the same Creative Commons License applies to that material. If you are interested in translating our content or are interested in joining our community of translators, please reach out to us.