In a world where everyone has “my” truth and “your” truth, many Christians believe the solution is to emphasize the Truth. Truth with a capital T. No spin. No alteration. “Just the facts, ma’am.” We want to be truth-seekers and truth-spreaders. Truth-finders and truth-tellers.

Unfortunately, just because we care about truth doesn’t mean we won’t deceive ourselves. You can pursue the truth and still fall for a lie. Even worse, it’s human nature to convince yourself that a lie is true, to persist in your rightness, and to assume your perspective is the correct one without giving attention to other points of view that challenge you. 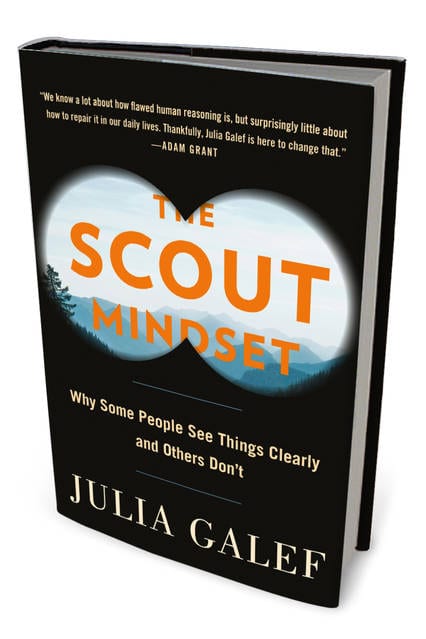 To be clear, we need both soldiers and scouts. There’s a place for both mindsets, and there are benefits to leaning to one side or the other, depending on the situation. But Galef thinks we undervalue the scout mindset to our detriment, both personally and societally, and she devotes the bulk of her book to explaining ways we can develop better reasoning skills.

Galef relies mainly on statistical studies, surveys, anecdotal stories, and evolutionary hypotheses. But some of her conclusions would be strengthened by adding a theological dimension.

A Christian understanding of sin and how it affects our minds helps to explain why our reasoning is motivated in a self-serving, self-protective direction. The result of sin is to make the human, in Augustine’s phrase, incurvatus in se—that is, turned or curved inward on oneself. Inward-turned reasoning leads to self-deception that happily bends the truth for one’s personal benefit. We think we’re being objective, when in reality, we’re just as curved inward as anyone else. What’s worse, as Christians, we may shake our heads at those who would relativize Truth to “my” story versus “yours” when we may be even more susceptible to assuming a correspondence between our perspective, limited as it may be, and capital T Truth.

A.J. Sertillanges’ classic work The Intellectual Life fits well with the scout mindset. He urges the scholar to put aside personal ambition and make the discovery of truth the prime obsession. The scholar seeks to “find things,” not “make them,” he writes. “We must give ourselves from the heart, if truth is to give itself to us… Truth serves only its slaves.”

Any intellectual aspiration must be subservient to truth. The scout wants an accurate view of the map. We pursue truth whatever the cost. Nowhere is this more evident than in the receiving or rejecting of criticism. “If the criticism is right and you wrong, do you mean to resist truth?” Sertillanges asks.

Pursuing truth also leads us to celebrate and affirm truth no matter where it comes from. “Train yourself to indifference about sources,” Sertillanges writes. “Truth alone has a claim, and it has that claim wherever it appears.”

The Benefits of Better Reasoning

How can we develop the truth-seeking impulse of the scout without falling back constantly into the overly defensive posture of the soldier? Galef compares thinking habits to physical routines of exercise.

When you wake up in the morning and head to the gym, the benefit of that choice isn’t just in the calories you burn or the muscle tone you develop that day. The benefit also likes in the fact that you’re reinforcing valuable skills and habits. That includes the bait of going to the gym, obviously, but also the broader skill of doing hard things, and the broader habit of following through on your promises to yourself.

We know this in the abstract. But it can be hard to appreciate those benefits viscerally, especially when your alarm goes off at six a.m. and your bed is cozy and warm. Any single day, on its own, doesn’t make much difference to your overall habits and skills. “I can just go tomorrow,” you think as you turn off the alarm. Which is true—but of course, you’ll think the same thing tomorrow.

Galef then explains the benefits in adopting the scout mindset, not just once, but over and over again.

The benefit of an act of scout mindset isn’t just about making your map of reality a bit more accurate. The benefit is in the habits and skills you’re reinforcing. Even when you’re reasoning about something like foreign politics that doesn’t impact your life directly, the way you think still impacts you indirectly, because you’re reinforcing general habits of thought. Every time you say, “Oh, that’s a good point, I hadn’t thought of that,” it gets a little bit easier for you to acknowledge good points in general. Every time you opt to check a fact before citing it, you become a little bit more likely to remember to check your facts in general. Every time you’re willing to say, “I was wrong,” it gets a little easier to be wrong in general.

I can point to only a few examples in the past few years of writers and scholars and politicians saying things like, “I was totally wrong on that,” or “That’s a good point, and I’ll need to consider it and what it might mean for my perspective,” or “I’ve not studied that yet, and so I don’t have a well-formed opinion.” Only a few.

Why is it rare to hear people talk this way? Because soldiers outnumber scouts. It’s more common (especially among those who live on social media) to act as soldiers tasked with defending the truth (as determined by one’s tribe or one’s already-formed convictions) than as scouts looking to discover the truth.

Galef encourages readers to “hold their identity lightly,” and by that she means “thinking of it in a matter-of-fact way, rather than as a central source of pride and meaning in your life” (200). She contrasts a lightly held identity with a “strongly held identity” that keeps us from persuading others.

“People who hold their identity strongly often recoil at the idea of trying to ‘understand’ a viewpoint they find disgustingly wrong or harmful. It feels like you’re giving aid and comfort to the enemy. But if you want to have a shot at actually changing people’s point of view rather than merely being disgusted at how wrong they are, understanding those views is a must.” (205)

I agree that understanding opposing views is important, but I disagree that the best way to do so is to hold your identity lightly. Everything depends on what identity you hold lightly or strongly. For Galef, the strongly held identity is problematic because “it’s hard to change someone’s mind when you feel morally and intellectually superior to them” (206).

But what if your strongly held identity should prevent you from feeling morally and intellectually superior to others? Rightly understood, a strongly held Christian identity, centered in the gracious redemption provided by a Savior who died for His enemies, should strip away any sense or moral superiority. What if it’s my Christian identity (and holding it strongly) that leads me to avoid caricaturing and demeaning others? As a Christian, whenever I a sense of self-righteousness prevents me from pursuing truth at all costs, or from seeking to understand my ideological opponents, or from demonstrating humility in my interactions, the problem is that I’m holding my Jesus-following identity too lightly not strongly. Everything depends on what identity you’re holding to.

Rightly applied, the scout mindset doesn’t keep you from arriving at a place of certainty regarding your convictions. It instead leads you to a stronger sense of conviction because you’ve worked hard to assess claims as objectively as possible. And it leads to better conversation with others who see things differently because you can at least understand why someone may be reasoning in a particular way.

If we as Christians want to truly follow the One who claimed to be the Truth, we—of all people—should be most committed to following the facts wherever they lead. We recognize the impact of sin on our prejudgments and human frailty on our limitations. We remain cheerfully confident in the power of God’s Word, so much so that we can carefully consider the arguments of our opponents to see where we might be in error. We who know how to repent (to turn around and change our minds) ought to lead the way in acknowledging the times we too have been “curved inward” in our understanding. And so, we seek to develop better habits of reasoning, leaning on the ancient wisdom of those who have gone before us, continually poring over the Scriptures as our authority, and above all, seeking to represent in our reasoning the One who is Truth everlasting.