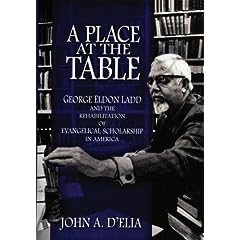 Fifty years ago, evangelicals were mired in endless debates over theories about the Last Days. Dispensational theology dominated the outlook of most evangelical scholarship and (for many) had become a key doctrine that determined whether one was orthodox or not.

Evangelical scholars found themselves largely ignored by the wider world of academia. Many happily ignored the academy in return. The scholarly dimension of evangelical identity was faltering as the movement was plagued by in-house squabbles and debates.

Into this defining era of evangelical controversy came George Eldon Ladd, professor of New Testament at Fuller Seminary from 1950-82 and one of the most important voices in 20th century evangelicalism. Though Ladd may remain unknown to most evangelicals in the pews, he left a legacy that continues to bear fruit within the evangelical academy. His theology also brought to many evangelical churches a new openness to different eschatological interpretations.

Ladd broke through the sterile debates about whether the kingdom of God was a present, spiritual reality or a future, earthly reality. He popularized a view of the kingdom as having two dimensions: “already/not yet.” Ladd was also one of the first solid evangelical scholars to go outside the fundamentalist camp in order to interact with liberal scholars in the academy, men like Rudolph Bultmann.

John A. D’Elia has recently completed a fascinating biographical look at this evangelical theologian. A Place at the Table: George Eldon Ladd and the Rehabilitation of Evangelical Scholarship in America (Oxford University Press, 2008) details Ladd’s early life, his conversion and his academic preparation. D’Elia describes the difficulty Ladd had in obtaining his own education. He shows how Ladd’s childhood negatively affected his later life, specifically his marriage and family life.

A Place at the Table is much more than a biographical sketch of Ladd’s life. D’Elia cautiously enters into the theological discussion he describes in order to spotlight Ladd’s contributions to evangelical scholarship and his interactions with scholars from outside the evangelical world. Those who read D’Elia’s book will receive an education, not merely regarding the historical aspects of Ladd’s interesting life, but also regarding the theological debates of the time.

Readers like myself may be surpised by the fact that Dispensationalism was viewed as a test of orthodoxy for evangelicals in the 1950’s. Ladd showed great courage in going against the Dispensational tide. His appeal to evangelicals to not blacklist each other over secondary issues is one of his most admirable qualities.

A Place at the Table is an educational look at Ladd’s life and accomplishments – the good, bad, and the ugly. D’Elia does not shy away from describing Ladd’s personal failures. Ladd lived many years with a crumbling marriage, a neglected family, and a heavy drinking problem. Obsessed with his desire to make a splash in the broader acadmic world, Ladd is crushed by another theologian’s negative review of his work. In the last decade of his life, Ladd came to see his attempts at engaging scholarship outside of evangelicalism as a “fool’s dream,” and he entered a period of depression from which he never fully recovered.

And yet, D’Elia’s biography shows rays of hope in Ladd’s later life. As a scholar passionate about the Great Commission, Ladd would often get choked up when talking about the gospel. He deeply mourned the loss of his wife. Amazingly, some of his most difficult years personally were some of his most productive professionally.

A Place at the Table provides valuable lessons for seminary students or other evangelical scholars. Ladd’s example serves to remind us of the importance of cherishing our families. Ladd’s example also serves as a warning against overestimating the opinions of others. And D’Elia’s description of the theological debates of the 1950’s provides some needed perspective regarding the debates that are currently raging in evangelicalism today.

Readers of A Place at the Table may be disappointed to discover that Ladd is not a larger-than-life hero, but a flawed Christian whom God used mightily in spite of his sins and failures. One senses the “already/not yet” nature of the kingdom pulsating through the narrative of Ladd’s life. Had Ladd’s personal life demonstrated a little more of the “already,” perhaps the story would have had a different outcome. After finishing the book, I felt a strange mixture of sadness and hopefulness, and a deep yearning for the “not yet” which Ladd so strongly proclaimed.