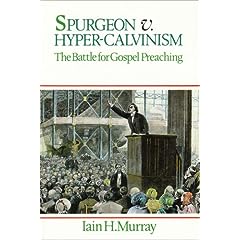 Despite the warnings of some, I do not believe the Southern Baptist Convention (or conservative evangelicalism for that matter) is currently facing the threat of Hyper-Calvinism. When properly defined, Hyper-Calvinism denies the universal intent of God’s love and denies the free offer of the gospel. I have never met a Calvinist who fits this description.

(Banner of Truth, 2002) is a short book that describes the great Charles Spurgeon’s battles with the Hyper-Calvinists of his day. While many Calvinists point to Spurgeon as a hero against Arminian theology, it is rare to see him held up as an example of avoiding the Hyper-Calvinist tendencies occasionally manifested among adherents to Calvinist theology. Murray’s book is a good pointer in the right direction. Read this from his introduction:

“While I know of no evidence that Hyper-Calvinism is recovering strength, it would appear that the priority which soul-winning had in Spurgeon’s ministry is not commonly seen to be our priority. The revival of doctrine has scarcely been matched by a revival of evangelism… Doctrine without usefulness is no prize.” (xiv)

“Hyper-Calvinism only arises whenever and wherever the truth of the sovereignty of God in salvation is firmly believed. The reason why Spurgeon’s first controversy has been so little thought of in these last hundred years is not that the subject is insignificant. It is rather that doctrinal Christianity as a whole has been too largely ignored. At the present time, when evangelical Calvinism is again being recovered in many parts of the earth, the danger of Hyper-Calvinism is once more a possibility and the lessons to be drawn from this old controversy have again become relevant.” (40)

The central thrust of the attack against Spurgeon is his view of “duty-faith.” Spurgeon believed in calling sinners to repentance. The Hyper-Calvinists believed that “saving faith in Christ cannot be the duty of sinners, for if we exhort the dead in trespasses and sins to trust in Christ we are attributing a power to them which they do not have.” (58).

The main source of conflict for Spurgeon’s opponents is doctrinal. However, Murray’s account shows that a fair amount of politics and intrigue were involved as well. Spurgeon’s rising popularity did not endear him to many of the traditionalist churches in town.

Murray does not shy away from the harsh aspects of Hyper-Calvinism. He quotes one preacher as saying:

Spurgeon responds to this heretical twisting of Calvinism by turning to the Scriptures. He argues that gospel invitations are universal in their scope, that faith is demanded of all, that man is wholly responsible for his own sin, and that the character of God is love.

Erik Raymond
A New Resource on an Old Confession
Why Our Church Cancelled Christmas Eve Service
How Can Pastors Prevent Burnout?
Scotty Smith
The Grand Larceny of Fear, Worry, and Blame
Stewarding Our “Impossible-with-Man” Stories
“Such a High Priest TRULY Meets Our Need”
Justin Taylor
The Scandal of the American Evangelical Intellectual
A Simple Way to Help One Million Christians in the Global South Get a Copy of Their Own Bible
Listen to Zambian Pastor Conrad Mbewe Narrate the ESV
Kevin DeYoung
A New (Old) Blog
Life and Books and Everything: American History and the Historian’s Task with Wilfred McClay
Life and Books and Everything: What’s Going Right in the Church?
LOAD MORE
Loading