In all of our discussions, we might forget that the theology we’re debating has a human face.  On the other end of our words, our blogs, and our preaching are people.  Listening people.  People who believe and trust us.  People who–tremble at this–take our teaching seriously and act on it.  There may be only a few people in our homes that listen to us, or there may be several dozen in our churches, or there may be an untold number across the globe tuning in through some electronic media.  But make no mistake about it, if a tree falls in the woods it does make a sound even if you don’t immediately see anyone around to hear it.  They’re there and they’re listening.

A couple of days ago my wife posed a question to me.  Standing over the kitchen counter she asked, “Do you think anyone has really illustrated what the problem is with Jakes’ teaching?”  She explained that she was quite aware of the many theological discussions at work.  But she was looking for someone to actually illustrate the problems stemming from the teaching of Jakes and others like him.  I pondered that for a moment and realized she was correct.  We didn’t have a picture of Jakes’ effect on real lives.  That’s why I call her “Kristie the Wise.”

So, perhaps it would be wise for us to stop for a moment to remember the very real people who sit under the false teaching of people like T.D. Jakes.  We need to put a face on the destruction caused by heterodoxy (“prosperity gospel”) and heresy (modalism).  To that end, I want to share with you an email I received from a brother after ER2.  He wrote with a concern very similar to my wife’s.  He wanted to share his story as an illustration.  I offered to share it anonymously, but he wanted to leave his name in it–Sean.  In his words, he wanted to “put a face to it.”

I am, to be really honest here, very upset by the passé attitudes [towards Jakes] of these brothers (and pastors, I might add). I’m upset for a few reasons, but If I’m being honest, the main reason why I’m so disturbed by this is because the prosperity gospel nearly killed me. Literally. I was so sick I was on the verge of death. I was lying in a hot bath with a temperature of 96 degrees, way beyond dehydrated, and literally dying with mercury poisoning. My mother was crying over my naked body, begging me to go to the hospital for treatment. “NO!” I insisted. How could I put faith in a doctor? “God is my ultimate healer! In him alone will I place my faith!”

I did eventually receive treatment, but I was still being ravished by this heresy. When I married my beautiful wife, Amber, I taught her (with the Bible of course), that there would be no taking of medicine in MY HOUSE! We would be faithful. When we were dead broke I refused to get a job because “God had promised me (through Canton Jones, no less) that I would be a buisness CEO, fortune 500, of course. How could I not have faith in that word of prophesy?

And there were a hundred other things that nearly destroyed my life and marriage. Would you care to guess who my MAIN teacher was? Who I followed as if he himself were Jesus? Who I tithed to regularly? Who’s books I read faithfully? Who’s sermons I purchased? Who’s dress I imitated?

Yes, you guessed it. TD Jakes.

My brother, this man is not merely confused, he is a wolf. God’s gracious staff saved me from him.  But don’t get it twisted.  Under my fur I still bear many scars that he gave to me with his powerful bite.

Sean is a 20-something, tattooed, urban type.  He has a beautiful young family and wants to now devote his life to the mission field.  He’s sitting under sound teaching of God’s word, building community with others, and looking to grow in the grace and knowledge of our Lord 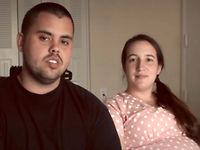 Jesus Christ.  But he had to first escape Jakes and the prosperity movement before he could really come to build his life on and give his life to the biblical gospel of Jesus Christ.

Now, not everyone has had the same experience as Sean and Amber.  And not everything in Sean’s experience can be attributed to the preacher.  But we can’t deny the connection between belief and behavior.  If the belief is faulty chances are the behavior will be faulty also.  Picture Sean.  Picture many more like Sean, falling into life-changing and sometimes life-threatening behaviors because they’ve believed a life-stealing teaching.  Now picture that teaching coming to an evangelical church near you.  Perhaps your own.  That’s the face we need to put on this destructive teaching.

Jakes’ false teaching has long been experienced in predominantly African-American and Hispanic-American communities.  His reach extends throughout the Caribbean and sub-Saharan Africa.  Recent events have given T.D. Jakes greater credibility in and access to communities that to this point were largely unaware of him.   In my opinion, that can’t be a good thing.

Trevin Wax
My Recent Stay at The Kilns in Oxford
The Body Is Bigger Than You Think
‘The Thrill of Orthodoxy’ Now Available
Melissa Kruger
Sneak Peek Interview: Wendy Alsup
Sneak Peek Interview: Trillia Newbell
Sneak Peek Interview: Julia Higgins
Thomas Kidd
From ‘Wretched’ to ‘Needy’: Changing a Classic Hymn
Christianity, Warfare, and American National Identity: An Interview with Benjamin Wetzel
Is the Declaration of Independence a Christian Document?
Justin Taylor
A Simple Way to Help One Million Christians in the Global South Get a Copy of Their Own Bible
Listen to Zambian Pastor Conrad Mbewe Narrate the ESV
Christological and Trinitarian Principles and Rules for Exegesis
LOAD MORE
Loading