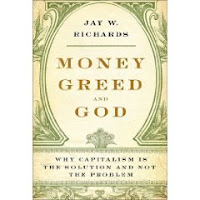 When I’m not reading history or theology I am often reading economics. I find the interplay between Christian commitment and economics fascinating, and filled with misunderstandings. If you’ve ever had questions about capitalism, and in particular whether or not a generous Christian can really support capitalism, I would encourage you to read Jay Richards’ new book Money, Greed, and God: Why Capitalism is the Solution and Not the Problem. Whether the title makes you say “Amen” or makes you want to roll your eyes into the back of your head, I would recommend this book as the best, most easily accessible, defense of capitalism from a Christian perspective.

Here is an interview with Jay Richards I conducted by email.

1. Tell us a little bit about yourself. Where are you from? What is your current vocation? Are you married? Do you have children?

I was born and raised in Amarillo, TX. I am married to Ginny (we just celebrated our eighteenth anniversary), and we have two lovely daughters, Gillian (10) and Ellie (6).

I worked full time at Discovery Institute for 7 1/2 years (in Seattle) and at Acton Institute for three years. We attended a CRC Church in Grand Rapids. At the moment, though, we’re out in the Seattle area while my wife finishes some course work for a masters degree. I’m getting to write full time as a Visiting Fellow at the Heritage Foundation. We’re writing a series of booklets on economic topics for ordinary, non-wonkish, people. I’m also editing a collection of articles designed to bridge the growing divide between social and fiscal conservatives. It’s scheduled to be released in late summer.

2. How did you become a Christian? What is your current church like and how are you involved?

I attended a mainline Presbyterian Church in Amarillo, and was a more or less conventional, mainline, Christian. In college, I had a crisis of faith, but was brought back from the brink through the writings of C.S. Lewis.

3. You didn’t always see the benefit to a market economy. Tell us a little bit about your story as you moved from strong opposition to capitalism to seeing the Christian virtues on the free market.

In college, I fell for many of the socialist-left ideas popular at the time (and which are regrettably making a comeback). Happily, I happened to read some good economics, including a terrific book on Marxism by Thomas Sowell. I also read Ayn Rand, which destroyed the vision of collectivism. By the time I was a senior in college, the luster of socialism had worn off. But it will still several years before I thought a Christian could defend capitalism. I suppose I had accepted Rand’s argument, but rejected the idea that greed was a virtue. I thought capitalism “worked,” but was still morally problematic. Once I read George Gilder’s Wealth and Poverty, and Michael Novak’s The Spirit of Democratic Capitalism, I changed my mind. This was actually when I was at Union Seminary in Virginia, and having to read Gustavo Gutierrez’s Theology of Liberation for the third time. I went looking for a counterbalance, and discovered Gilder and Novak.

4. In your book, you unpack eight mistakes Christians make with economics. I don’t want to make you rewrite the whole book for this interview, but could you give a one sentence description of each myth?

Here’s how I summarize the eight myths in my book:

I linked the myths to eight corresponding questions:

Can’t we build a just society?
What does God require of us as Christians?
Doesn’t capitalism foster unfair competition?
If I become rich, won’t someone else become poor?
Isn’t capitalism based on greed?
Has Christianity ever really embraced capitalism?
Doesn’t capitalism lead to an ugly consumerist culture?
Do we take more than our fair share? That is, isn’t our modern
lifestyle causing us to use up all the natural resources?

I struggled with this taxonomy for a while, but I do think the vast majority of bad thinking on economics among Christians can be placed in one of these eight categories.

5. Do you recommend that churches offer fair trade coffee?

In general, I don’t think fair trade coffee makes sense economically (see pages 39-42), although I also don’t think it’s as problematic as many coercive strategies, such as wealth redistribution. I’ve recently learned that there is some diversity among fair trade organizations, especially among Christian ministries. On the other hand, I wouldn’t want to speak too harshly of fair trade without nuancing, since it is normally an expression of a charitable impulse, and it appears, at least on the surface, to be a market-oriented way of dealing with third world poverty.

6. On page 35, you write “Spiritually you’re better off a little mixed up about economics than indifferent to human suffering. Economically, though, only what you do is important, whatever your reason.” This seems to be a very important point for the book. What are you trying to say in these two sentences?

When I wrote: “Spiritually you’re better off a little mixed up about economics than indifferent to human suffering. Economically, though, only what you do is important, whatever your reason,” I was trying to balance but capture Gilson’s “Piety is no substitute for technique.” To me, this is one of most important points I’ve tried to make. Motivation IS important when we’re considering our spiritual state before God. It’s just that our motivation for a policy has nothing to do with the real world effects of the policy. I think that Christians often weight our (and others’) motivations far too heavily on economic matters. It’s as if we think feeling bad about poverty is more obligatory than actually doing something that helps the poor. For instance, several times in churches I’ve pointed out why minimum wage laws don’t really help the poor in the long run. I’ve never had anyone try to debunk the argument, but several times I’ve received the complaint that my argument shows that I’m not really concerned about the poor. It doesn’t of course. But even if it were evidence that I weren’t concerned about the poor, the argument’s validity (or lack thereof) would remain the same.

7. I’m sure that you will get some feedback from libertarians for your critique of Ayn Rand. Some might be surprised that you would criticize Rand in a book promoting free market capitalism. What, in your opinion, does Rand get wrong?

My criticism of Rand is central to my argument. In my view, she rightly defended free markets, limited government, and the importance of entrepreneurs, but she located those arguments in a deeply flawed atheistic philosophy. Without going into all the problems with Objectivism, I criticize her defense of greed, as well as her identification of greed with capitalism. I also argue that she confuses Adam Smith’s arguments about self-interest with selfishness. If Rand is right about capitalism, it seems to me, then it would be very hard for Christians to be capitalists. That said, as I mention in the book, Rand actually was important in helping me to purge my socialist sympathies.

8. You finish the book with “Ten Ways to Alleviate Poverty; or, Creating Wealth in Ten Tough Steps.” Why are the rule of law (number one) and a formal property system (number three) so important to the alleviation of poverty?

Rule of law is a prerequisite for a free market even to exist. A free market is not anarchy, as some critics who talk about “unbridled capitalism” seem to imply. For a market to be free, exchanges must be voluntary, which means they must be perceived as a benefit for all participants. This is what makes a free market a positive-sum game by definition. If the strong can steal from their weaker neighbors with impunity, in contrast, they have little motivation for looking for win-win exchanges. Rule of law encourages participants in a market to seek out exchanges that are mutually beneficial, even if the participants have immoral motives. That’s a good thing.

In arguing for the importance of private property and titling in raising people out of poverty, I’m following Hernando de Soto’s important arguments in The Mystery of Capital. These laws and methods allow land to become assets, to become property, to be compared with and traded with other assets. This opens up all sorts of wealth-creating activities that the first world takes for granted, but which is still lacking in much of the developing world.

9. You go out of your way to argue that the universe is divinely ordered and purposeful. What difference does this make for our approach to economics?

I think that a culture’s general beliefs about the nature of reality can have significant economic consequences. For instance, if one believes that the world is orderly and designed for a purpose, one is more likely to look for, and discover, aspects of that order. Moreover, these beliefs can encourage optimism, delayed gratification and a motivation to make the world a better place. Finally, it prevents one from reducing economics to materialism. The most important truths of economics emerge from the reality of the human person. That reality requires a theological/philosophical framework that can accommodate it.

Of course, to offset utopian tendencies, these beliefs are best tempered with a healthy realization of our flaws. In the Christian worldview, original sin fulfills this function.

10. What advice would you give pastors as they preach on money?

I would have two main words of advice for any pastor who wants to preach about money. First, look carefully at the what Scripture and the Christian tradition actually say about money. Second, get acquainted with some basic truths of economics. There are empirical realities in economics, just as there are in chemistry and physics. It’s not all hopelessly laden with ideology. And it doesn’t require advanced degrees in economics. If a pastor shows that he understands some economics, he’s much more likely to be taken seriously when he speaks prophetically about money to his parishioners. I suppose I wrote the book, in part, to help pastors do just that.