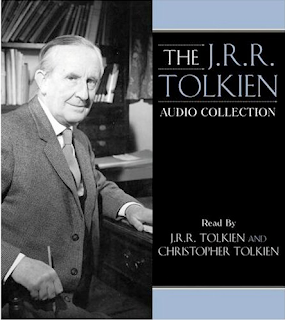 Since I posted on Lewis in his own voice, I thought I’d do the same for Tolkien.

The CD to get is The J.R.R. Tolkien Audio Collection. Here’s a description:

Of historic note, these selections from The Hobbit and The Lord of the Rings are based on a tape recording Tolkien made in 1952, which inspired him to continue his own quest to see his vision in print. Also included is a never-published poem, “The Mirror of Galadriel,” originally intended for inclusion in the trilogy, yet edited out. And, finally, Tolkien’s son, Christopher, reads selections from his father’s The Silmarillion, the epic foundation upon which rests the whole of his work.

Below are materials free online. A few clips from interviews, followed by several readings, recitings by Tolkien of his own material.

A 47-second clip of an interview about how The Hobbit began in Tolkien’s mind:

From a 1968 interview, discussing the Rings mythology:

Tolkien reads from chapter 5 of The Hobbit:

Tolkien reciting the Ring Verse from “The Shadow of the Past” (LOTR):

Tolkien reading from chapter 4 of The Two Towers:

Tolkien singing “Troll Sat Alone On His Seat Of Stone,” the poem recited by Sam Gamgee in “Flight to the Ford” (LOTR):

Tolkien in 1952 reciting the Quenya poem “Namárië,” sung by Galadriel in the chapter “Farewell to Lórien” (LOTR):

Tolkien recites the poem “The Hoard” from The Adventures of Tom Bombadil:

Scotty Smith
Our Father’s “Graciousness”
The Cardiac Health We Get in the Gospel
Loving Now More As We WILL Love Then
Trevin Wax
Some Personal Announcements Before Signing Off
5 Quick Takes for New Culture Wars
Truthful Witness in the Public Square
Thomas Kidd
Is the Declaration of Independence a Christian Document?
The ‘Jefferson Bible’ and a Founder’s Skepticism
What ‘Deist’ Meant to Thomas Jefferson
Ray Ortlund
Psalm 1, a reverse translation
Happy beyond description
Why I Got out of Twitter
LOAD MORE
Loading