A significant new study has just been published, showing that it is scientifically possible—contrary to what is often claimed—that human beings descend from a single human couple:

Here are the authors of the piece:

Ola Hössjer is professor of mathematical statistics at Stockholm University, Sweden. He has done research in statistics and probability theory with applications in population genetics, epidemiology, and insurance mathematics. Hössjer is the author of 85 peer-reviewed papers, has supervised 13 PhD students, and in 2009 he received the Gustafsson prize in mathematics.

Ann Gauger is a senior research scientist at Biologic Institute. Her work uses molecular genetics and genomic engineering to study the origin, organization, and operation of metabolic pathways. She received a BS in biology from MIT and a PhD in developmental biology from the University of Washington, where she studied cell adhesion molecules involved in Drosophila embryogenesis. As a post-doctoral fellow at Harvard she cloned and characterized the Drosophila kinesin light chain. Her research has been published in Nature, Development, and the Journal of Biological Chemistry.

I asked them if they could explain the model they used and why it’s never been done before.

Let’s start with what you concluded: “As far as we know scientifically from the genetic data, the human species could have come from as a single couple, so that all humans alive today could have descended uniquely from that first pair.” How important is the word “could” in this sentence? I am assuming you would not say that science has proven this, but rather that at this stage in our knowledge, it at least allows it?

AG: The science as we know it shows that it is mathematically possible for us to have come from just one man and one woman. That is based on population genetics, a field that keeps track of genetic diversity in populations over time.

We say it is possible, not proven, because there are many other things to deal with, like the fossil record.

OH: Yes, this is correct. It is hard to prove that a certain model of human history is the right one based on genetic data from individuals of today. The reason is that sometimes quite different models of human ancestry might fit genetic data equally well.

We showed that a model with a first unique couple gave a good fit to some African genetic data. Therefore we cannot rule out a model where humanity started from a first couple in favor of a model where we share ancestry with chimps and other species.

Despite these difficulties of inferring human history, it might be possible though in the future to favor one model over the other, when more data sets are analyzed and more complex models are fitted.

For those readers—most of us!—who are not biologists, geneticists, or mathematicians, could you explain the basic idea of how a researcher can infer history from genetic data?

OH: Genetic data is like fingerprints. Any individual (except monozygotic twins) has a unique DNA that identifies him or her. The more related two different individuals are, the more similar their genetic data is.

Human history is like a genealogical tree that connects all individuals alive today. The first human couple forms the root of the tree, whereas individuals of the present form the tips of the tree.

It is possible to infer a tree of human ancestry (with quite a lot of uncertainty) by trying to fit various trees and investigate which of these trees are most consistent with genetic data. The inferred tree should be able to pick up that pairs of individuals with more similar DNA are more closely related. That is, pairs of individuals with more similar DNA should have ancestral lineages that merge more quickly, so that their most recent common ancestor lived more recently.

AG: Think of it like solving a puzzle. You have current mutations as clues, and you know who has those mutations. If you are lucky, you also know something about whether those people are related. So you work your way backward in time so that the mutations make sense, arising in person A1, then passing to person A2 and B1, then B2, then B3 in the present.

Massive computational models do it for the whole genome and go back potentially millions of years. It’s a best-fit model, not a guaranteed “this is the way it was on Saturday, April 15, 200,001 BC” kind of thing.

This is an evangelical blog, and evangelicals have been told for many years now that they are being anti-intellectual and anti-scientific if they don’t recognize that, because science shows that humans evolved from a large population over a period of millions of years, therefore we must reject the idea that one human race could have descended from just two human beings. Why do you reject that claim regarding the science? In other words, since you disagree with what other scientists are saying, what are they doing wrong?

OH: Until recently, none tried to fit a model of human ancestry where we all descend from only two human beings.

About ten years ago John Sanford and Robert Carter started working on models where we all descend from one single couple.

A few years later Ann Gauger proposed a similar project that I joined.

For this reason science has actually not ruled out a first human couple—since this model had actually not been tested.

Why is this? Well, the reason is philosophical rather than based on empirical facts. Modern science is very secular. Typically, only those hypotheses are allowed to be tested that can be framed in purely natural terms (= methodological naturalism). A model with a first couple implicitly requires an Intelligent Designer or a Creator in order to answer how this first couple was generated in the first place. Modern science will therefore rule out a first couple model from start (even if one leaves it to the reader to answer how the first couple originated), before data has been analyzed.

To make this more concrete: In all the models where humans share ancestry with chimps, there is essentially only one mechanism for generating genetic diversity: mutations. In our model we allow for a second mechanism—that Adam and Eve were created with diversity. Created diversity of the first couple is like a new parameter that can be tuned and therefore adds flexibility to the model.

AG: First of all, who gave scientists the right to interpret Scripture? Why should they care if we believe that we came from a literal first couple? They stuck their noses in where they didn’t belong.

Second, they actually didn’t test the thing they were claiming.

There are two ways to get a “population of two” start.

(a) There is the two from the beginning, which is self-explanatory. That is what we mean by Adam and Eve.

(b) But there is another way, and that is to start with a population, say a tribe of humans, and then something happens and there are only two left. That is a bottleneck of two.

Either kind of start from two works in our model. They are just the same.

Now, population geneticists used indirect methods to estimate average population size since our putative split from chimps 6 million years ago. But averaging over that long time period would miss a sudden sharp bottleneck down to two. It would not be detected. They were making unjustified claims when they said we could not have come from two.

What new tests were you able to run to examine whether the single-couple hypothesis is compatible with genetic data?

OH: We were able to fit our single-couple model of humanity to some summary statistics of genetic data.

The first such statistic is called the Allele Frequency Spectrum (AFS). It tells how genetic variants with different frequencies are distributed.

The second summary statistic is called Linkage Disequilibrium (LD) Plots. It tells how genetic data at different parts of the chromosomes are correlated (due to so called recombinations).

We were able to show that the AFS and LD plots of our model matched real data very well.

AG: Ola Hössjer devised an elegant solution to the problem of modeling large numbers over long time spans. I am going to quote myself here to explain it. This comes from an Evolution News article I wrote called “We Could Have Come from Two.”

[Ola] had a model we now call Haplo that contained within it a simple but brilliant idea. He would start first from current data and use a method called standard coalescence to trace the lineages backward in time, like growing a forest from stems to branches to trunks. Then once he had that forest of trunks, he pruned the picture of all non-productive branches, those that did not have any progeny in the future, the “dead ends,” and used it as a framework for a new forward-looking model. The pruning saved considerable memory and reduced the computational load. This meant we could go deeper in time or handle larger populations. See figure below. 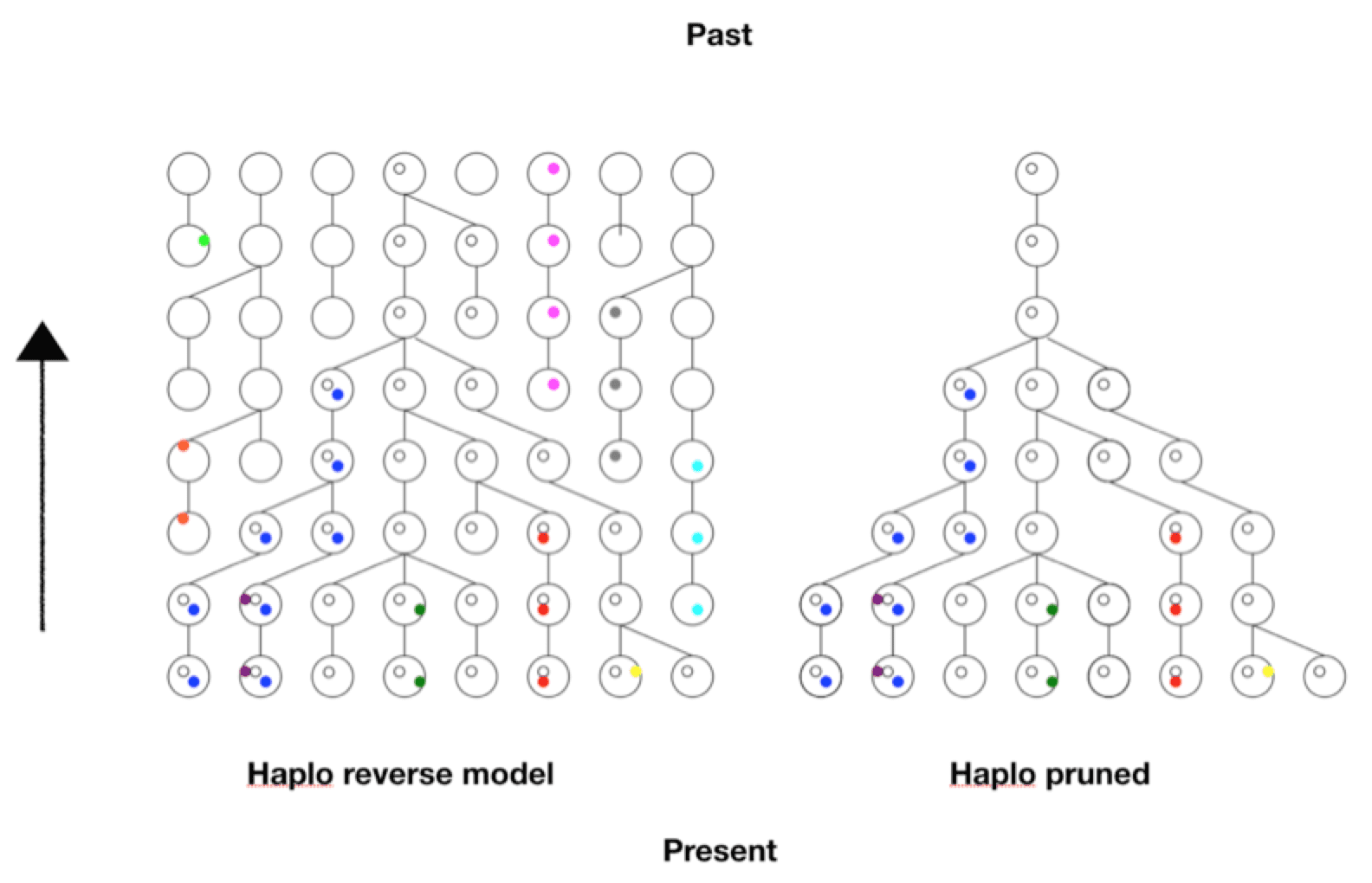 Each row represents a generation, with the present at the bottom, and each ball is a chromosome. The colored dots are different mutations or Single Nucleotide Polymorphisms (SNPs) the chromosome carries. The links from generation to generation show the ancestral lineage of each chromosome going back in time.

In figure A I have shown only one lineage, and so in tracing it backward, there is no pruning necessary, but when a whole collection of coalescence trees are combined (an ancestral recombination graph), some pruning will be necessary, since some chromosomes will be ancestral in some lineages and not others.

First the tree (or forest) in reverse is obtained, much larger and complex than this here, and pruned to reveal nothing but the lineages that led to the present. So this provided the framework, the matrix upon which the forward model will run. The computer doesn’t have to keep track of all possible choices at all possible positions. Look at the pruned tree and notice all the spaces the computer doesn’t have to store in memory. It adds greatly to what the program can accomplish.

You can read the original paper here.

For more work along this line, see the book Theistic Evolution, in particular, Section I, Part 2: “The Case against Universal Common Descent and for a Unique Human Origin.”

12. Five Questions Everyone Should Ask about Common Descent (Paul A. Nelson)

17. Pressure to Conform Leads to Bias in Science (Christopher Shaw)

Trevin Wax
Don’t Let Your Wrath Make You a Wraith
Ministry Is Tough: When Self-Care Becomes Self-Absorption
Ivan Provorov and the Pressure to Punish LGBT+ Dissent
Thomas Kidd
Tradition, the Bible, and America’s Debate over Slavery
Charles Spurgeon the Pastor
From ‘Wretched’ to ‘Needy’: Changing a Classic Hymn
Kevin DeYoung
A New (Old) Blog
Life and Books and Everything: American History and the Historian’s Task with Wilfred McClay
Life and Books and Everything: What’s Going Right in the Church?
Erik Raymond
Do Affections Provide Assurance?
A New Resource on an Old Confession
Why Our Church Cancelled Christmas Eve Service
LOAD MORE
Loading