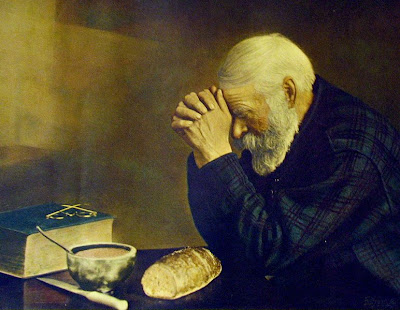 At my sister-in-law’s apartment a couple of weeks ago, I saw a familiar picture on the wall: the one of the old man praying before a meal. It was in our home growing up, and is probably one of the most reprinted pieces of art in the 20th century.

I was curious as to the history behind it, so I did a bit of digging.

Here’s a bit of an FAQ about it:

Is it a photo or a painting?

It was originally a photo, and it was later painted in oils.

What’s the name of the painting?

Who is the man in the photo?

What year was it taken?

Who took the photo?

Where was it taken?

Wilden, selling foot-scrapers, called upon Enstrom. Enstrom was in the midst of preparing a portfolio of photos for the upcoming Minnesota Photographer’s Association convention. Wilden agreed to be photographed, and Enstrom arranged a table with a bread, a knife, a bowl of gruel, spectacles, and a Bible, asking Wilden to bow in prayer. Enstrom later said, “I wanted to take a picture that would show people that even though they had to do without many things because of the war they still had much to be thankful for.”

Who did the oil painting?

What about the similar picture of the old woman bowed in prayer?
It, too, is a photo, called “Gratitude,” taken in the 1960s by Jack Garren, who owned a Christian bookstore in Centralia, Illinois. The subject is Mrs. Myrtle Copple (d. 1975), and the photo was designed to complement “Grace.” The two are often packaged together: “Grace and Gratitude.”

The Rise of Gospel-Centered Documentaries

Bavinck on Our Strange World Where Judgment and Mercy Are Intermingled

Mark Dever on Politics and the Local Church