Garrett blushed at such accolades, for he was genuinely self-effacing. But you need read only one of his two greatest works before realizing no other contemporary Baptist systematician has yet risen to his level of authorial achievement. And when you consult his entire corpus, you discover it may well be a long time before anybody will.

Who was this man? And how did he accomplish so much?

Who Was James Leo Garrett Jr.? 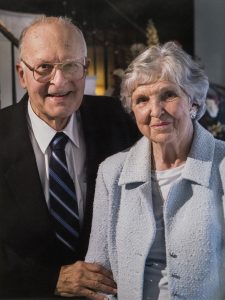 Born to a father who served as a deacon and university professor and a pious mother named after a missionary, Garrett was born again at the age of 9 then baptized into the church of the founder of Southwestern Seminary. Disappointed after the military twice rejected his voluntary service (due to extreme myopia), he entered college instead, ultimately sensing God’s call to pastoral ministry. Between leading three churches, he earned two bachelor’s degrees (Baylor University and Southwestern Seminary), one master’s (Princeton), and two doctorates (Southwestern and Harvard), followed by an honorary doctorate (Baylor). His formal academic career included significant stints at Southern Seminary (14 years), Baylor University (6 years), and Southwestern Seminary (28 years), interspersed with one-year stints in Oxford and Hong Kong. In 1948 he married his soulmate, fellow Southwestern student Myrta Ann, who herself became a highly respected librarian. They raised three sons and together ministered to students, faculty, and churches until she predeceased him in 2015.

Garrett taught masses of theological students. During the administration of Russell Dilday, when more than 5,000 students were enrolled at Southwestern Seminary, Garrett’s classes in particular overflowed. (I still appreciate the student who allowed me to move from the back to take his front-row seat, so I might hear every word.) But only the hardy enrolled in Garrett’s classes. Known affectionately as “Machine-Gun Garrett” for his rapid-fire lecture style, graduating students proudly wore T-shirts emblazoned with “I Survived Theo with Leo.” Thousands of pastors, missionaries, professors, and other ministers filed through his classrooms, and many of those found their way into his office and his home for personal encounters.

Beyond the classroom, Garrett continues to teach many others through his writings. His magna opera include his precisely detailed two-volume Systematic Theology: Biblical, Historical, and Evangelical and his exhaustive Baptist Theology: A Four-Century Study. The method he followed in his systematic garners lasting respect, even as it gently but significantly reorients classical debates over doctrines like sanctification and election. Garrett began with a review of the biblical literature, followed by a summary of historical responses, and only then considered the systematic ramifications of a doctrine. What shocks many readers is that he may appear only to review the options. This is because, except in the essentials, he avoided strong statements. As a gentleman, his own persuasions are discerned clearly in the indicative or implied through the interrogative, but never through the pejorative nor the pugilistic.

Garrett’s particular love for Baptist life manifests itself in his second magnum opus, wherein he rehearses the history of Baptist ruminations, respecting the diverse breadth of that life, honoring their belief in the dependability of Scripture and concern for following Jesus, even while holding at bay incursions from Christological heresy or fundamentalist dispensationalism. Garrett’s other authored and edited volumes initiated or expanded the fields of ecumenism, religious liberty, believers’-church identity, and the close relationship of Baptists with evangelicals. A particular doctrine close to his heart was the priesthood of all believers, about which we were co-authoring an essay before he died.

How Did He Accomplish So Much?

Garrett amassed significant accomplishments in research, teaching, and churchmanship—through his intentional method of incorporating detailed knowledge of Scripture and history with personal integrity of life. Soon after his retirement and as my career began, he shared an unpublished piece about our calling. He defined the seminary professor according to four roles: teacher, scholar, mentor, and practitioner.

As teacher, one must carefully prepare each class session, cultivate the professorial decorum of respect and dialogue, clearly place reading and writing requirements before the students, and use debate, drama, and new technology alongside lectures in the classroom. As scholar, one must buttress seminary and personal libraries, attend and deliver special lectures, write articles for both academy and church, author and edit books individually and collegially, and use sabbaticals wisely for writing. Leo did well with these first two roles, as the above account of his teaching career and writings testifies.

He fulfilled two other roles that are much more difficult to measure, because they concern the heart and manifest themselves primarily through personal encounter. In spite of the difficulty of measuring the last two roles, many have testified about what he and Myrta did. These accounts appeared often during his life and through social media in the hours since his death. What manner of man advocates for Martin Luther King Jr. to speak at a Southern seminary when protests threaten chaos? What type of professor pays for a doctoral student’s semester tuition from his notoriously frugal salary? What quality of character weeps over external threats against colleagues with whom he otherwise disagrees about revelation?

Glory alone knows all the good works Leo and Myrta performed from their transformed hearts and as gospel ministers. For James Leo Garrett Jr. a personal life surrendered to Jesus’s lordship is necessary for a seminary professor. The last two of the four roles of the seminary professor concerned being a mentor and a practitioner. He, therefore, intentionally set to mentor others in and outside the classroom, even after the course. In the role of practitioner, he was emphatic that the seminary professor must evidence “the fruit of the spirit” as a Christian, a family member, a church member, a citizen, and a Southern Baptist.

This was who James Leo Garrett Jr. was, and this is how he accomplished so much in the life of the academy and of the churches. But I also knew Leo as a theological father, as a professor who affirmed my calling to follow him while I trembled like a child, and as a colleague who gave me his lectern and even his own faculty office.

Tears keep me from saying anything more, tears he himself taught me to shed, tears of joy for a life well lived.

Malcolm Yarnell is research professor of systematic theology at Southwestern Baptist Theological Seminary. He has written a number of books, including The Formation of Christian Doctrine, God the Trinity: Biblical Portraits, and Royal Priesthood in the English Reformation. You can follow him on Twitter.

1 Should We Use Bethel Songs in Worship? 4 Diagnostic Questions

2 How to Improve Your Preaching

3 The Satanic Doctrine of a Wrathless Cross

5 Enough with ‘I Am Enough’