Kristen Hatton is the author of The Gospel-Centered Life in Exodus for Students, available this week from New Growth Press.

Staring at the offerings in the teen section of my local Christian bookstore, I felt so discouraged. What was I going to teach to my small group of teen girls? Everything appeared to be surface-level advice for complicated teen issues—studies that missed dealing with the heart and applying the gospel in favor of feel-good messages for navigating a happy, successful teen life. 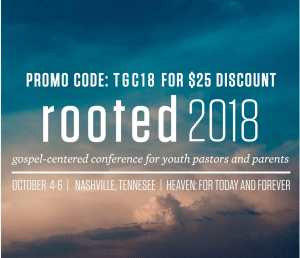 Teens need their eyes lifted off themselves. They need to be deeply rooted in Scripture, to learn who God is beyond Sunday-school soundbites. They need to see his Word as the one unfolding story about his Son. Otherwise, Scripture can just seem like disjointed bits of advice and rules. No wonder it’s often read with the goal of checking “quiet time” off the to-do list. No wonder it’s so often misapplied.

Christ and Us in Exodus

That day at the bookstore, I walked out empty-handed. I wasn’t willing to settle for anything diluted of the gospel. After an internet search also failed to deliver any options, I decided to use a sermon series from my pastor-husband as the springboard for writing my own Bible studies. I began with Exodus, because in few other books is God’s pattern of redemption laid out so clearly.

For most of my group, seeing Jesus in the Old Testament was eye-opening. They didn’t expect him to show up in such places as the tenth plague, the wilderness, and the tabernacle. They also didn’t expect to see how we’re just like the Israelites.

With the Israelites’ thankless grumbling and idol worship, it’s easy to see why they needed a redeemer. But when we read Exodus through the lens of God’s bigger redemption story, we see it’s not just a story about the Israelites; it’s our story. We too turn away from the rule and reign of God, and bow down to false gods instead. We too need rescuing.

Teenagers need to understand this point. We all do. When sin is only cast as really bad, external behaviors, we miss seeing how deep our need of rescue really is. We think by simply avoiding certain things, we’re doing pretty well. So for the teenager who goes to church each week, who doesn’t drink or sleep around, she feels pretty righteous—especially compared to peers who don’t abide by her measuring stick.

But Exodus shows us we’re all more sin-sick than we thought. Sin taints our motives and desires, and shows up in who or what we worship—the false gods we turn to looking for an identity. Whether it’s our appearance, performance, perfectionism, the desire for recognition or acceptance, we’re just like the Israelites with their golden calf.

But the good news of Exodus is this: Sin is not the end of the story. Over and over, God intervened on Israel’s behalf. And when they continued to fail him, instead of rejecting them, he did something shocking. God established a permanent relationship through a covenant that declared him to be their God and they his people. In other words, he bound himself to them. This is what Christ does in uniting himself to those who have faith in him.

Grace for the Guilty

Christ has fulfilled what we see in God’s deliverance of the Israelites. The hope of Israel and the hope for us rests on God’s faithfulness to fulfill his promises—promises guaranteed by his Word.

This is the same Word who revealed himself to Moses in the bush as the great I Am, and later showed Moses his glory as he proclaimed to be,

merciful and gracious, slow to anger, and abounding in steadfast love and faithfulness, keeping steadfast love for thousands, forgiving iniquity and transgression and sin but who will by no means clear the guilty.  (Exod. 34:6–7)

The same Word also became the sacrificial lamb so God’s wrath could pass over us.

Our teens need to encounter this Word who is Christ in the story of the Israelites in Exodus to help them trust what remains true for God’s people in every age. And as they do, may they hunger more for the true bread of life God provides.

Kristen Hatton is the author of The Gospel-Centered Life in Exodus for Students, Face Time: Your Identity in a Selfie World and Get Your Story Straight. In addition to her own blog, she is a frequent contributor to the Rooted Ministry blog and enCourage women’s blog. She resides in Edmond, Oklahoma, with her pastor husband, and they have three teenage/young adult children. To learn more, visit www.kristenhatton.com.