Pro-choice Americans are reeling after the Supreme Court’s recent decision to strike down Roe v. Wade. While Christians rejoice to see a step taken toward justice for unborn life, many of our neighbors are experiencing the decision as an existential threat. That angst gets channeled in attacks against religious groups, blaming them for what they understand to be a hypocritical and crippling national tragedy. Why are they so afraid? What can we do to help our friends, family, and coworkers understand why people of faith celebrate what they lament?

In love, we approach fiction with fact. Here are eight myths about abortion in America—and how to answer them with evidence.

Many challenge the notion that Christians are pro-life—insisting they’re simply pro-birth instead. Do believers in Jesus show any evidence of caring for the hurting and marginalized once they leave the womb?

The numbers tell us, “Absolutely they do.” Besides starting almost every crisis pregnancy center in your city, Christians adopt at more than twice the national average and are exponentially more generous to the poor than the average citizen. 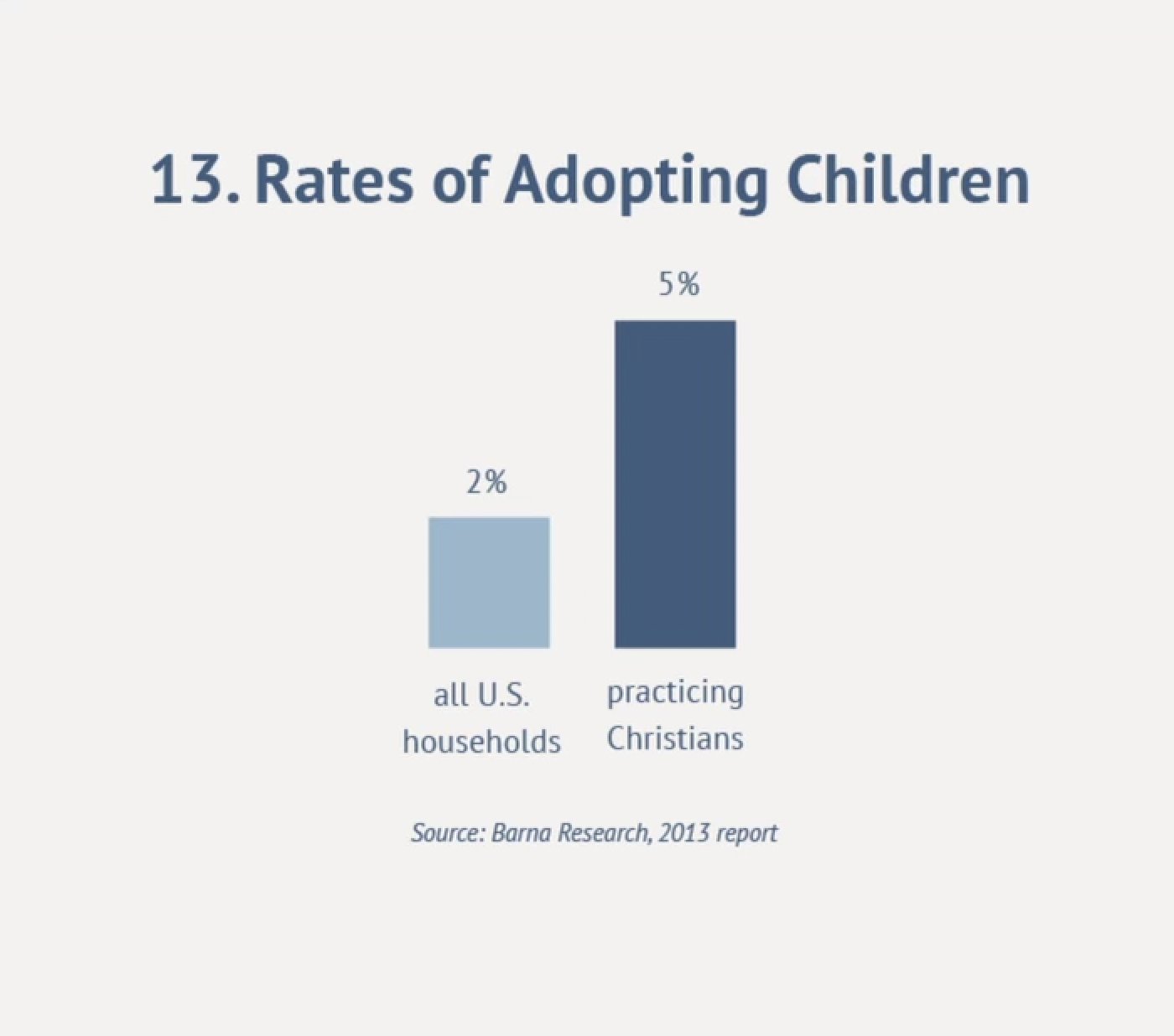 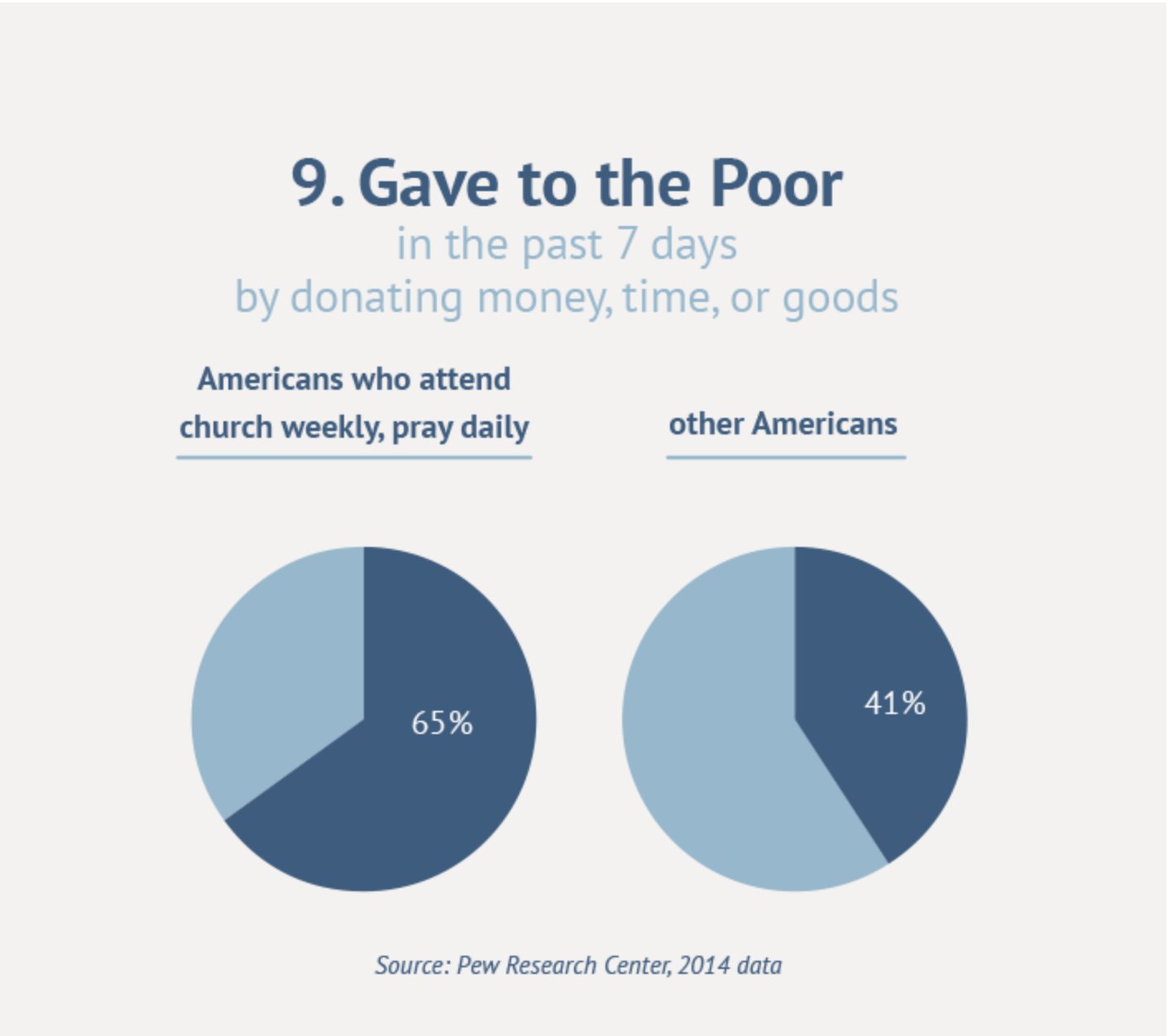 Myth #2: Men are the ones opposing abortion.

Did the patriarchy overturn Roe? How can men, who don’t have a uterus, be allowed to make major decisions like this on the behalf of women? Let’s look at the numbers.

The graphic below shows women are more likely to identify as pro-life than men. This phenomenon has been documented for some time now (see, for example, the 2014 Guardian article “Why Are Women More Opposed to Abortion?”). 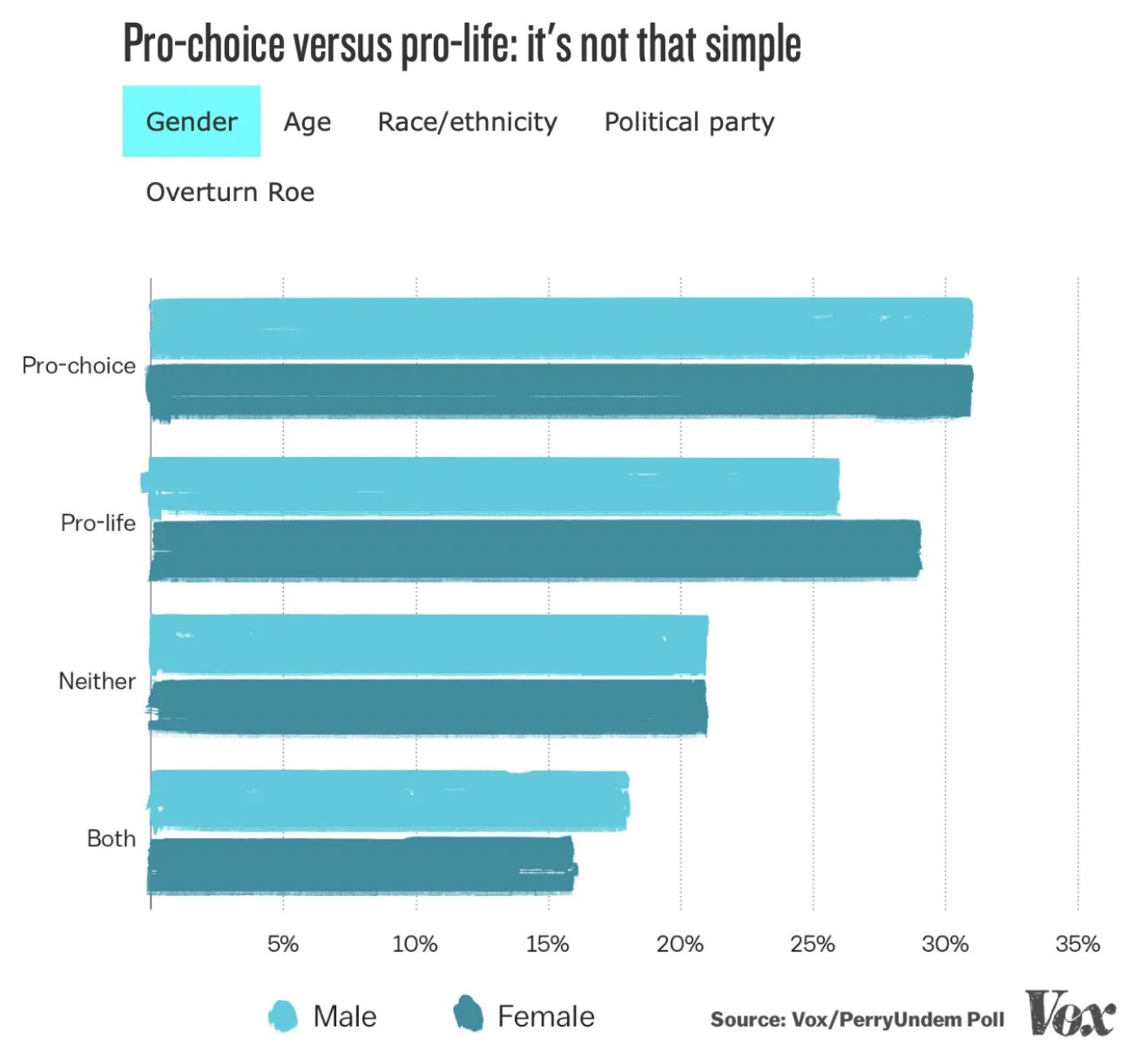 “My body, my choice” is the rallying cry of the pro-choice movement. It even made it’s way into a Pixar film. Abortion advocates would have us believe a fetus is akin to a woman’s toenails. Frankly, such a view runs against the grain of what science tells us about fetal development and identity.

An unborn child has its own distinct DNA, fingerprints, heartbeat, thoughts, emotions, and pain and pleasure points. Such a child, science confirms, is not part of another person’s body—the child maintains its own distinct body and personhood.

Well-meaning pro-choice advocates chalk up the majority of American abortions to terrible circumstances—rape, incest, poverty, serious physical or mental defects, and so on. A breakdown of abortion statistics, though, suggests otherwise. Consider Florida, the only state to systematically delineate a reason for every abortion. What do the numbers show? Nearly 75 percent of all abortions in 2020 were done for no particular reason. Anecdotally, there’s reason to believe Florida’s numbers are not an outlier but are paradigmatic for the country as a whole.

One of the major animating fears for pro-choice Americans in a post-Roe world is the supposed danger for women with complicated pregnancies. Many hypothesize that women who experience ectopic pregnancies, septic uteruses, and miscarriages won’t receive the care they require, thus putting their lives at risk.

Pro-life advocates want the same level of safety for mothers as pro-choice advocates do.

Here’s the reality: even in states with strong abortion restrictions, the law of the land is to authorize any procedure necessary to preserve the life of a mother. There is no reason to believe that will change after Dobbs. Pro-life advocates want the same level of safety for mothers as pro-choice advocates do.

Some suggest the overturning of Roe v. Wade is a symptom of a larger disease: white supremacy. After all, the economic burdens of unplanned pregnancy tend to have a disproportionate effect on minority communities. Isn’t it all too easy for white middle- and upper-class citizens to pontificate from a position of relative privilege?

Abortion opponents, however, come from every kind of ethnic and socioeconomic background. The sad truth is that since 1976, more minority children have been murdered than any other population segment. Also, keep in mind the pro-choice movement isn’t free from association with racist ideology. Margaret Sanger, founder of Planned Parenthood, used rhetoric about people of color that should make your skin crawl.

The Supreme Court ruled 6-3 in favor of overturning Roe, but would the decision have clear majority consent if put to a popular vote? The pro-choice stance is generally regarded as the majority opinion in the United States. Doesn’t the Dobbs decision upend a political system by the people, for the people?

In short, no. Roughly 71 percent of Americans favor some restrictions on a woman’s right to choose. The graphic below reveals the numeric gap between pro-life and pro-choice citizens is actually pretty close. A very small minority believe abortion should be legal in all cases with no exceptions; a very small minority believe abortions should always be illegal with no exceptions. The rest of the country is somewhere in the middle. We’re far from a consensus—other than that most are comfortable with some level of restrictions on a woman’s right to choose. 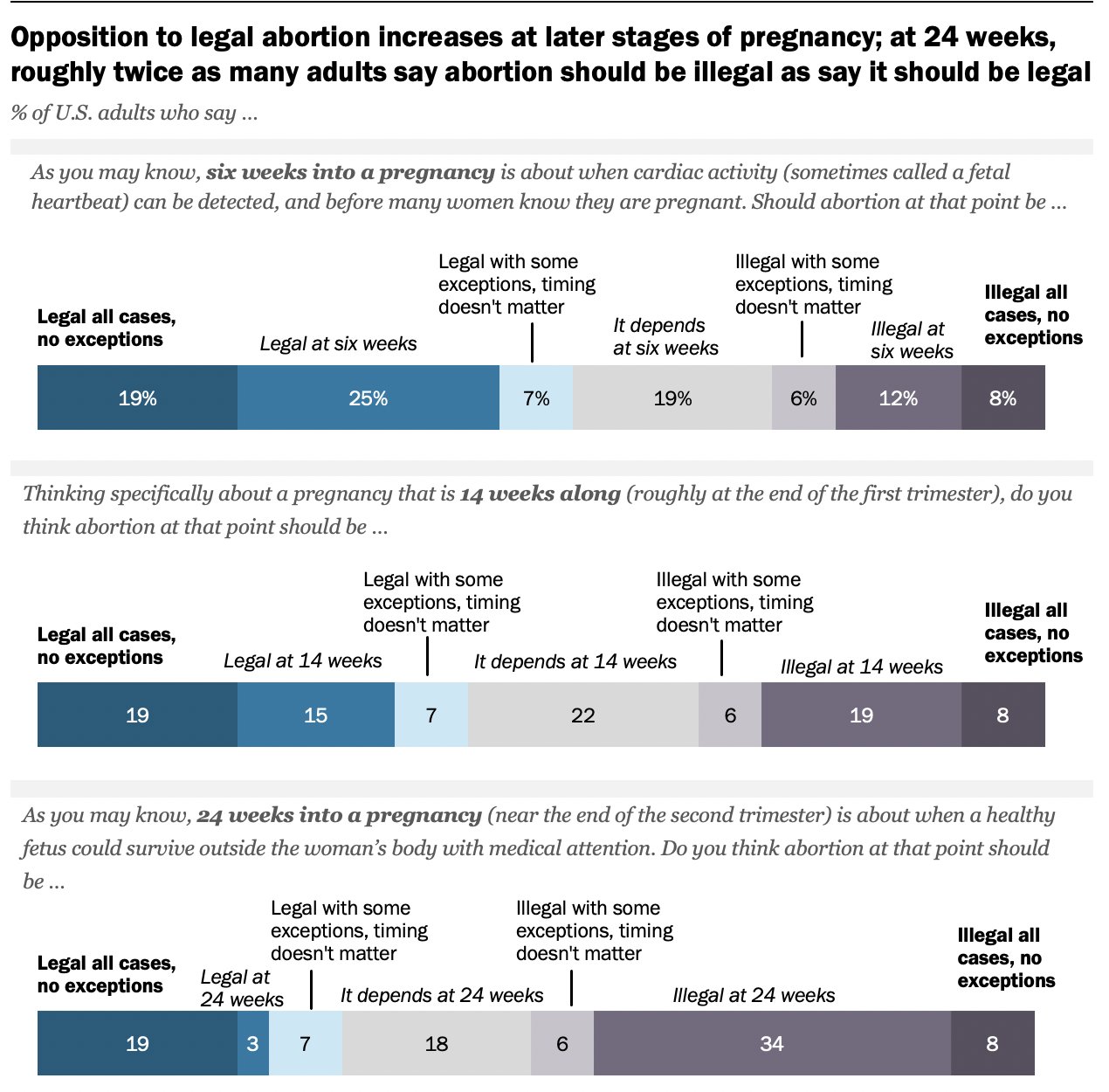 Does banning abortion work? Won’t lack of access to safe, legal abortions drive mothers to find other ways to terminate their pregnancies? The argument is pragmatic: banning abortions won’t reduce them. But the pro-life position isn’t simply pragmatic; fundamentally it’s a question of morality. The Emancipation Proclamation wasn’t a bust because it didn’t effectively end slavery in all the states. Abortion is a moral evil like slavery is a moral evil. Any law reducing access to it should be welcomed.

Besides, evidence suggests that abortion rates have plummeted with the introduction of bans at the state level.

In a hyperpartisan age, not every question is an honest one. Nor can the spiritual warfare involved in these debates be overstated. But neighbor love necessitates exposing faulty assumptions and claims with truth.

With equal parts grace and truth, let’s commit to humbly correcting the myths our neighbors have bought—for the sake of their consciences and the lives of the unborn in our land.

Josh Howerton is senior pastor of Lakepointe Church in the Dallas-Fort Worth area. Josh is married to Jana, whom he met on a blind date, and together they have three children: Eliana, Felicity Hope, and Hudson. Josh’s life passion is to make disciples, train church leaders, and plant churches. You can follow him on Twitter.