There can be no question that we’re in the midst of a “transgender moment” as our culture revises what it means to be male and female. This revision has enormous practical implications, even for those of us who would rather not be part of the revolution. Just a couple of weeks ago in an Ohio courtroom, the parents of a transgender teenager lost custody of their child because they refused to affirm their child’s transgender feelings. The court ruled against the parents’ wishes to raise the child according to their Christian beliefs and removed the child from her parents’ home.

If you haven’t cared about this issue much until now, it’s becoming clear that eventually you’ll be made to care. And this is especially true for Christians and other religious believers who believe the distinction between male and female is a part of God’s good creation design.

Until relatively recently there have been few books published to help Christians understand and respond to the claims of transgender ideologues. Books aimed at evangelicals have been a mixed bag.

On the one hand, we have seen Mark Yarhouse’s 2015 book, Understanding Gender Dysphoria, which commends sex-change operations as one possible way a Christian might deal with gender-confused feelings. On the other hand, two helpful books have appeared, both of which offer a careful biblical evaluation of transgenderism. The first is Vaughan Roberts’s short work, Transgender (2016) [read TGC’s review], and the second is Andrew Walker’s more substantial treatment, God and the Transgender Debate (2017) [read TGC’s review].

Anderson isn’t trying to offer a theological evaluation of transgenderism. Rather, he writes “to provide a nuanced view of our sexed embodiment, a balanced approach to policy issues involving transgender identity and gender more broadly, and a sober and honest survey of the human costs of getting human nature wrong” (3).

Anderson gives an account of the shortcomings of transgender ideology, and he does so with arguments that can appeal to Christians and non-Christians alike. His thesis is that “the best biology, psychology, and philosophy all support an understanding of sex as a bodily reality, and of gender as a social manifestation of bodily sex” (2). He meticulously proves this thesis with a tour de force of evidence, reason, and argument.

The unstated foundation of Anderson’s work is a natural-law perspective on human embodiment. The closest Anderson gets to explaining this foundation is on page 158:

A basic principle of sound ethical reflection is that there is natural goodness for natural kinds, not merely conventional or willfully created “good-ness.” . . . A human being has a particular nature set by the human form. We have an integrated rational animal nature, a personal bodily nature. Certain things are good for our nature, and other things are not. Human persons are naturally directed toward certain ends, in order to fulfill the type of creature they are. 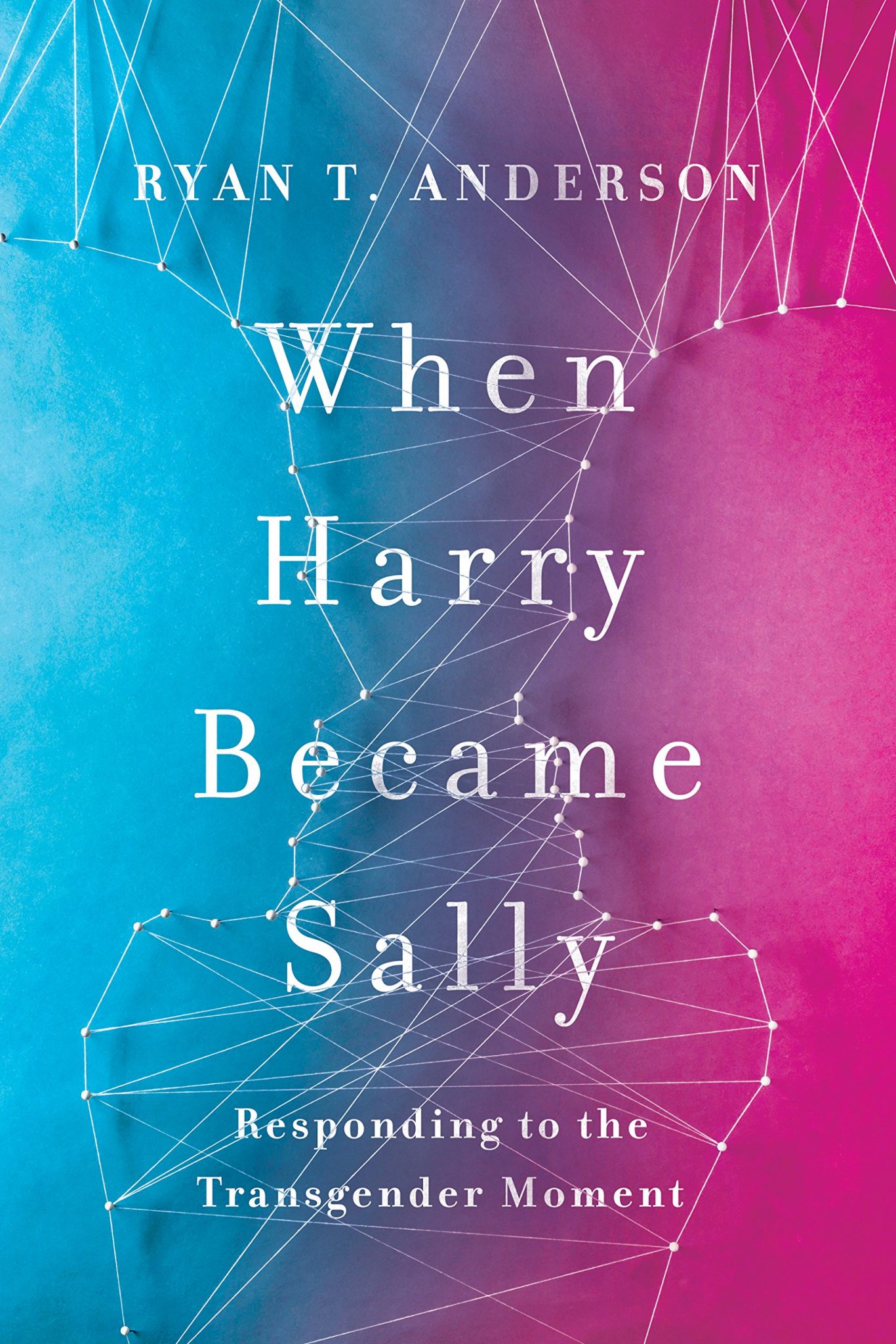 When Harry Became Sally: Responding to the Transgender Moment

When Harry Became Sally: Responding to the Transgender Moment

Can a boy be “trapped” in a girl’s body? Can modern medicine “reassign” sex? Is our sex “assigned” to us in the first place? What is the most loving response to a person experiencing a conflicted sense of gender? What should our law say on matters of “gender identity”?

When Harry Became Sally provides thoughtful answers to questions arising from our transgender moment. Drawing on the best insights from biology, psychology, and philosophy, Ryan Anderson offers a nuanced view of human embodiment, a balanced approach to public policy on gender identity, and a sober assessment of the human costs of getting human nature wrong.

This teleological foundation allows Anderson to argue his case in terms accessible to any reasonable reader, so long as they recognize the reproductive capacities of male and female bodies.

To put a fine point on it, Anderson contends against the dominant ideology of the “transgender moment” with an appeal to what is good for those who experience gender-confusion. The evidence reveals that transgender activists favor measures that harm people, rather than help them.

For example, the activists’ “treatment plan” for gender-confused children urges four stages of intervention. First, a social transition gives the child a new name, pronouns, wardrobe, and outward presentation. Second, a child approaching puberty will be placed on puberty blockers to prevent the normal development of sex characteristics in the child. Third, at the age of 16, the child is given cross-sex hormones: “boys will be given feminizing hormones such as estrogen, and girls will be given masculinizing hormones such as androgens (testosterone)” (120). In boys, this therapy renders a higher-pitched voice, breast growth, and a feminine body shape. In girls, this therapy renders a lower-voice, atrophying of breast tissue, and body-hair growth. Fourth, at age 18, these individuals are given the option to undergo sex reassignment surgery, which involves amputation of primary and secondary sex characteristics and plastic surgery to create new sex characteristics (121).

Anderson shows that none of these interventions is backed up by a preponderance of scientific evidence. On the contrary, the social transition “may seriously interfere with healthy psychological functioning” (121). Puberty-blocking hasn’t been proven to be a reversible measure, so parents should regard it as a “drastic and experimental measure” (127) causing stunted growth and infertility. Anderson concludes:

There is still virtually no serious scientific evidence to demonstrate that it is beneficial. . . . If science doesn’t support this course of treatment for children, why are these “drastic and experimental measures” now being promoted as the norm?

Even more alarming is the fact that some of these interventions—including sex-change surgeries—are being performed on children at earlier ages than ever. Again, these measures aren’t based on scientific evidence of their usefulness but on ideology. And those advocating minor children to undergo permanent and irreversible damage to their bodies ignore the fact that the vast majority of gender-confused children grow out of their gender-confused feelings with no intervention at all. The best scientific studies available show that about 80 percent to 95 percent of these children “will eventually come to identify with their bodies—if they aren’t socially and medically encouraged to maintain a transgender identity” (125).

Anderson’s book is filled with scientific evidence showing that transgender interventions are harmful. This is true not only for children but also for adults—many of whom come to regret their sex-change surgeries.

The most gut-wrenching section of When Harry Became Sally is chapter 3, which narrates the stories of people who have assumed transgender identities and then later “detransitioned” to embrace their natal sex. The tragedy of their stories isn’t merely their psychological trauma, but also the physical trauma inflicted on their bodies by “medical” interventions that amputated healthy sexual organs and body parts, rendering them irreversibly infertile and unable to experience normal sexual relationships. Their stories are devastating.

Anderson’s book is so helpful that I hardly have any disagreements.

For example, although Anderson’s medical descriptions are accessible to the ordinary reader and helpful in evaluating transgender claims, I wish he had a clearer conclusion about the status of intersex persons. On the whole, the discussion of intersex is superb. However, he doesn’t explain how to determine the sex of intersex children. He writes, “The sound medical response is to identify the predominant underlying sex and then to take measures to provide health and functioning, as far as possible” (91).

But how does one determine the “predominant underlying sex”? Through chromosomes? Sexual organs? The answer isn’t clear. But again, this is a minor point that doesn’t undermine the main thesis of the book.

In the past, I have been dubious about the persuasive power of natural-law arguments about the sanctity of traditional marriage. The spirit of the age seems to have totally blunted the force of such arguments, and secular Western people have so far remained largely unpersuaded.

The evidence against the claims of transgender activists is overwhelming.

Having said that, I’m much more hopeful about the persuasive power of a book like When Harry Became Sally. The evidence against the claims of transgender activists is overwhelming. Anderson has marshaled the evidence in so convincing a fashion, I’m confident that any parent caring for a transgender child would benefit from this book. It’s hard to imagine a parent ignoring the harms that Anderson documents. Likewise, adults dealing with transgender feelings won’t easily be able to ignore the evidence Anderson brings forth. Neither will fair-minded readers of this book.

Why are science and reason not winning the day on this topic, and among the very people who say Christians don’t care about science? The ideological currents of our day push them away from hearing a reasonable alternative to the ascendant transgender propaganda. For that same reason, many parents may in fact ignore the evidence in this book, because they ultimately want to give their child what he or she wants.

But ignoring this evidence would be a mistake that carries with it life-altering consequences for gender-confused children. In the next five to ten years, the truth will out as today’s gender-confused children move into adulthood with stunted, surgically mutilated, infertile bodies. There will be a harvest of sorrow for many who come to realize that the “treatments” can’t be undone—and all of this because the adults who cared for them failed to see through the propaganda to the truth. Love always rejoices in the truth, even when it defies the spirit of the age (1 Cor. 13:6). And oftentimes especially when it defies the spirit of the age.

When Harry Became Sally is a comprehensive source for all the scientific, philosophical, and medical information one needs in order to evaluate transgender claims. I can’t recommend this book highly enough.

Editors’ note: Check out this page for more resources on transgenderism.

Denny Burk is a professor of biblical studies and ethics at Boyce College, where he also serves as the director of The Center for Gospel and Culture. He serves as associate pastor at Kenwood Baptist Church in Louisville, Kentucky, and president of the Council on Biblical Manhood and Womanhood. He blogs at DennyBurk.com.