During his prolific career, Bob Dylan has been called one of the most influential American musicians of the 20th century, the voice of a generation. Scott Marshall’s new book, Bob Dylan: A Spiritual Life, tackles the perennial question of whether we can call the enigmatic performer a Christian.

Dylan burst on the scene in the early 1960s with hits such as “The Times They Are a Changin’” and “Like a Rolling Stone.” To date, the Jewish-born Dylan (born with the last name Zimmerman) has sold more than 100 million records. Three of the most controversial come from his “Christian period” (1979 to 1981), including the iconic Slow Train Coming with the memorable anthem “Gotta Serve Somebody.” Most observers would say that, following a fierce reaction from fans and music critics, Dylan returned to Judaism.

Yet Marshall—a writer and teacher—asserts that the iconic musician’s much-discussed (and often criticized) embrace of Jesus Christ never really ended, and that Dylan comfortably inhabits both sides of the Jewish/Christian divide to this day. 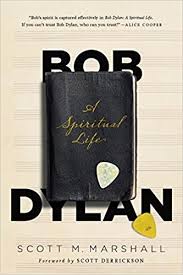 As Marshall writes, “Dylan had no problem connecting his Judaism with the new truths he was discovering about Jesus.”

Bob Dylan: A Spiritual Life presents two main types of evidence—Dylan’s own words, and his voluminous output of songs, both recorded and performed. Marshall refers to a meticulous survey of Dylan’s works from 1961 to 1978 (all before Dylan’s public embrace of Jesus). It found that 89 of 246 songs or liner notes contained Bible references, evenly split between the Hebrew Scriptures and the New Testament.

Marshall shows clearly that Dylan, like many artists before and since, remains haunted by God’s Word. Yet counting scriptural allusions to the death of Jesus or the Apocalypse doesn’t prove his case. What are we to do with Dylan’s lyrics that point to a Hindu or nihilistic outlook?

Dylan, for one, isn’t concerned. “I don’t have to know what a song means,” he has said. “I’ve written all kinds of things into my songs. And I’m not going to worry about it—what it all means.”

In fact, Dylan has cultivated an aura of mystery about his beliefs. His statements in interviews can be cryptic and sometimes contradictory.

Dylan has said he’s “a true believer.” Carolyn Dennis, a former wife, told Marshall that when she asked Dylan whether he was still a believer, he answered, “I believe the whole Bible.” In 2001, Dylan told an interviewer, “I’ve had a God-given sense of destiny. This is what I was put on earth to do.” Yet when Rolling Stone asked whether he was born again, Dylan responded, “I would never call it that, I’ve never said I’m born again. That’s just a media term.”

Marshall presents scant evidence of an active faith, with the usual markers of church membership or Christian growth using the means of grace. Dylan’s belief, if it exists at all, seems confined to his lyrics, his closely guarded personal life, and his support of various public causes, including the state of Israel. We see a complex, occasionally irascible figure, a vulnerable introvert (especially when let down by Christians), and even a good man. But do we see a disciple?

The mad scramble, from Jews and Christians alike, to claim Dylan as ours may reveal more about us than about him. What do Christians get if Dylan does believe in Jesus, other than a notch in our evangelistic belts over another celebrity decision?

I will be overjoyed if I can call Bob a genuine brother in Christ. The Bible has made an indelible imprint on Dylan the artist, and it’s not too much to say that all who love his music have been blessed by it. Ultimately, however, Bob Dylan: A Spiritual Life leaves me not quite convinced, but not without hope. As Marshall says, “Why bet against Dylan having a place at that heavenly welcome table?”

Indeed. We all gotta serve somebody.

Stan Guthrie is an editor at large for Christianity Today and for the Chuck Colson Center for Christian Worldview. An award-winning journalist, author, and commentator on the evangelical scene, he has written, co-written, or edited more than a dozen books, including God’s Story in 66 Verses (Thomas Nelson, 2015) and The Seven Signs of Jesus: God’s Proof for the Open-Minded (CreateSpace, 2017).