The Doctrine of Sanctification
Must Jesus Be Lord?
Glorification: The Eternal State of the Redeemed
The Christian Life

The charts directly under the next five headings attempt to clarify five major views at the risk of oversimplifying them. Note:

The first four views chronologically separate the time a person becomes a Christian from the time progressive sanctification begins.

The Wesleyan View of Progressive Sanctification 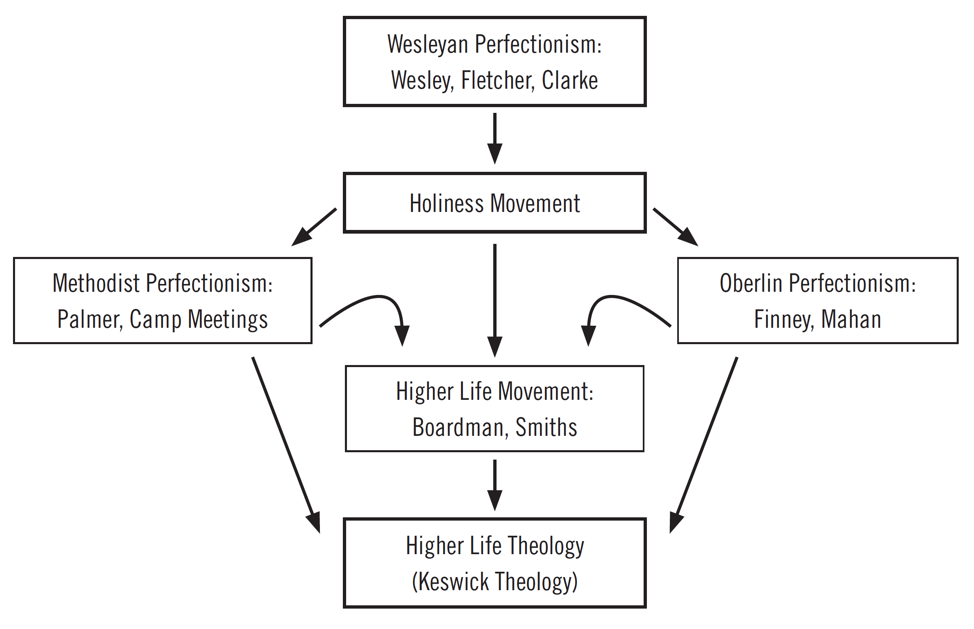 The Higher Life (or Keswick) View of Progressive Sanctification

Christians experience the second blessing (i.e., they move from category 1 to category 2) through surrender and faith: “Let go and let God.” There are two steps:

The Pentecostal View of Progressive Sanctification

Pentecostalism, according to most church historians, began on December 31, 1900. According to Pentecostalism, believers should experience Spirit-baptism after conversion and initially demonstrate this by speaking in tongues.

The Chaferian View of Progressive Sanctification

Like higher life theology, the Chaferian view identifies three categories of people: (1) natural (unconverted), (2) carnal (converted but characterized by an unconverted lifestyle), and (3) spiritual (converted and Spirit-filled). Unlike higher life theology, the Chaferian view insists that Spirit-baptism occurs at conversion for all Christians. Spirit-baptism is a once-for-all-time act at conversion, and repeated Spirit-filling is the key for a Christian to live as a spiritual person instead of a carnal one.

(The Chaferian view of progressive sanctification is directly related to the so-called Lordship salvation controversy. See the article “Must Jesus Be Lord?”)

The Reformed View of Progressive Sanctification

All Christians are both justified and being progressively sanctified (Rom 5–8). Justification and progressive sanctification are distinct:

Paul does not teach that there is a permanent category called “carnal Christians” in which fruitless, fleshly professing believers may remain throughout their entire “Christian” life.

Bad theology dishonors God and hurts people. That applies to views of the Christian life that chronologically separate the time a person becomes a Christian from the time progressive sanctification begins. They are well-meaning quick-fix approaches to Christian living. But their quick fix to your struggle with sin will not result in a higher life, deeper life, victorious life, more abundant life, or anything other than a misguided, frustrated, and/or disillusioned life. There is a better way. (See the articles “Sanctification,” “The Mortification of Sin,” “The Christian Life,” “Enjoying God,” “Trusting God,” “Serving God,” “Cultivating Practical Godliness,” “Overcoming Temptation,” and “Confession of Sin.”)

This essay is part of the Concise Theology series. All views expressed in this essay are those of the author. This essay is freely available under Creative Commons License with Attribution-ShareAlike, allowing users to share it in other mediums/formats and adapt/translate the content as long as an attribution link, indication of changes, and the same Creative Commons License applies to that material. If you are interested in translating our content or are interested in joining our community of translators, please reach out to us.

The Doctrine of Sanctification
Must Jesus Be Lord?
Glorification: The Eternal State of the Redeemed
The Christian Life