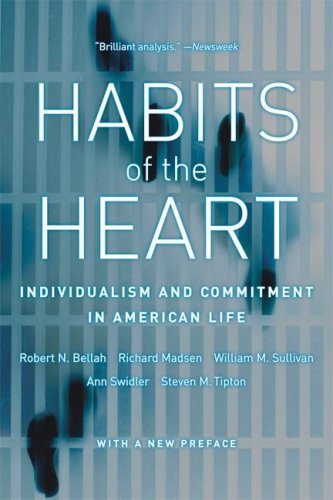 By the end of this month, I hope to have turned in the manuscript for my next book—an accessible look at the dominant way most people view the purpose of life as opposed to the Bible’s perspective. Last year, I did a multi-part series on expressive individualism: the idea that the purpose of life is to find and then express yourself. My goal in the new book is to explain this way of thinking in light of the Bible without using academic terms (like “expressive individualism”) or biblical jargon that would make the writing less accessible to the ordinary person.

Habits of the Heart: Individualism and Commitment in American Life is a book that comes highly recommended by Tim Keller and other church leaders. It’s written by a group of sociologists: Robert Bellah, Richard Madsen, William Sullivan, Ann Swidler, and Steven Tipton. The first release was in 1985, followed by an update in 1996, and a third edition in 2007. I’ve read this book multiple times, and it continues to stimulate thought and reflection. Below are a few excerpts that help you understand  their take on expressive individualism.

The authors of Habits of the Heart see diminishing solidarity in society.

Much of what has been happening in our society has been undermining our sense of community at every level. We are facing trends that threaten our basic sense of solidarity with others: solidarity with those near to us (loyalty to neighbors, colleagues at work, fellow townsfolk), but also solidarity with those who live far from us, those who are economically in situations very different from our own, those of other nations. Yet this solidarity—this sense of connection, shared fate, mutual responsibility, community—is more critical now than ever. It is a solidarity, trust, mutual responsibility that allows human communities to deal with threats and take advantage of opportunities. How can we strengthen these endangered capacities, which are first of all cultural capacities to think in certain ways? (xxxvi–xxxvii)

Freedom to Be Alone

Why do we see this phenomenon? In part because of American cultural traditions that prize independence, self-reliance, and autonomous freedom. Here are some quotes.

What Is the Good Life?

Another reason for the lack of solidarity is due to the changing nature of what constitutes “the good”—both individually and corporately. More quotes:

Religion in This World

How does religious adherence change in a world of expressive individualism? By altering the fundamental orientation of both belief and practice. Communities form around individual interests.

There are so many more quotes I could pull from this book, but I hope this smattering of insights will lead you to read it for yourself. It’s well worth your time.