It’s rare to find a book that delves into historical trends, philosophical reflection, and contemporary analysis while remaining remarkably cohesive and (even better) immensely enjoyable to read. How else can I describe Steven D. Smith’s Pagans and Christians in the City: Culture Wars from the Tiber to the Potomac? Non-fiction books, especially those that dive deep into analysis and philosophy, rarely make for page-turners. But Smith’s work is an exception.

Ancient Paganism and the Christian Revolution 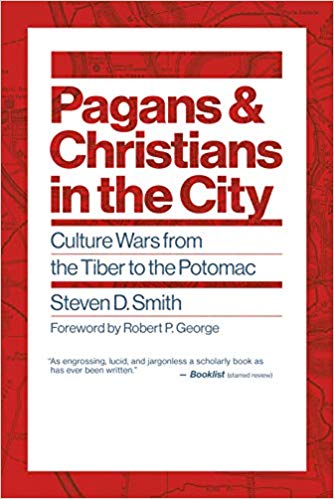 To answer these questions, Smith takes us back to the days of the Roman Empire and paints a picture of paganism, explores ancient understandings of the human person, points out the pervasiveness of “religiosity” in the culture of the time, and describes the cultivation of a sense of community through certain rituals and consecrated spaces. During our sojourn in ancient Rome, Smith helps us understand the place and function of sexuality in this patriarchal society, and he describes the diversity of Roman religion. The key takeaway in this analysis? Ancient paganism, even though it was a world of superstition, magic, and a pantheon of deities, was primarily immanent, or “this-worldly.”

Christianity came onto the scene, at first subversively and later through the political establishment, in what can best be described as a revolution in human thought and culture. The Christian revolution involved a new understanding of the human person, as well as a pronounced and pointed sexual ethic in stark contrast to the laxity of the Roman world. But most fundamental of all were the transcendent claims of Christianity. Smith writes:

“Pagan religion differs from Judaism and Christianity in its placement of the sacred. Pagan religion locates the sacred within this world. In that way, paganism can consecrate the world from within: it is religiosity relative to an immanent sacred. Judaism and Christianity, by contrast, reflect a transcendent religiosity; they place the sacred, ultimately, outside the world—‘beyond time and space.’” (111-112)

In the shift from the immanent to the transcendent, the historical developments that lead toward our modern-day era take shape. Even though Christianity’s revolution overtook ancient paganism, the latter was never banished from Western civilization, even if many of its religious trappings and rituals disappeared. Paganism’s orientation to life in the world remained under the surface, occasionally sparring with Christianity under different circumstances. But today it has clearly re-emerged in our cultural conflicts.

Smith lays out these two existential orientations to life in the world, one immanent and one transcendent:

“According to one orientation, life in the world is sufficient unto itself—as it needs to be, because it is our only life in the only world that we have any reason to believe in. Life is—or at least can be—a beautiful and sometimes sublime thing, but its beauty and sublimity are finite and immanent to this world. The sacred exists, but it exists here—in the here and now. There is not, and there need not be, anything else. Not for us mortals, at least.” (189)

“The other orientation can acknowledge the beauty and sublimity of life in the world. It can go so far, as in much Christian thought, as to insist that although not actually divine, the world has a sacramental quality. In this view, however, the world is not sufficient unto itself. Rather, its blessed qualities of beauty and sublimity are reflective of a more transcendent Reality, and they point beyond themselves to a beatified existence. . . . Cut off from that transcendence, life in the world would become empty, pointless, devoid of meaning.” (189-190)

Smith sees in these two orientations the source of our “culture wars,” most notably in religious-liberty debates that serve as a microcosm of “the current and perennial struggle between transcendent and immanent religiosities.” He believes there are serious attempts to “roll back” the Christian revolution of the fourth century (303) and return to an immanent religion, while maintaining the fruit left behind by Christianity’s emphasis on the transcendent.

But is this possible? Can we sustain the fruit of the Christian revolution if we cut off the transcendent and return to immanent religion alone in public life?

Smith points out the problems in celebrating Christianity’s contributions (the development of the notion of human rights, for example) while rejecting its premises. Even among those who push for a return to the immanent, the most familiar criticisms of Christianity “essentially accuse Christianity of failing to live up to its own ideals and commitments—to ideals and commitments that the critics themselves at least implicitly take as authoritative but that for the most part would not even have been embraced as such by ancient pagans” (214). For example, “in indicting Christianity for its violence, critics thus embrace a Christian standard and deploy it against Christianity” (215). Christianity is in the dock, but it’s being judged by its own principles.

Where does all of this analysis leave us? Smith places the current debates over religious liberty in wider context, showing how the seeds of this conflict go back generations:

“One side in the struggle favors a conception of religious freedom that is consistent with—and thus symbolically expressive of, and thus to an extent constitutive of—a city of a political community that respects and is open to transcendence. The other side, guided by a different civic vision, seeks to close that opening. In sealing off the city against transcendence, though, this side is not opposed to religion, or even to transcendent religion. Not necessarily, anyway, and not for now. Nor are actors on that side of the divide necessarily opposed to religious freedom. But they work to keep the troublesome, transcendent sort of religion out of the public square—outside the inner city walls, so to speak—and thus to maintain a public square whose commitments are confined to the satisfaction of ‘interests’ and to immanently sacred values” (303).

Smith’s analysis helps us see why so many struggles in the culture wars of the United States resemble Matthew Arnold’s image of “ignorant armies clashing by night.” Citizens may be confused, often making judgment calls based on different instincts (not always coherent and consistent) because of the nature of the philosophical struggle under the surface of current debates. Even the Supreme Court’s decisions in the past hundred years or so betray the signs of this struggle, sometimes coming down on one side, but more recently demonstrating a commitment to immanence as necessary or definitional for secular society.

If you want to peek behind the curtain to see why religious liberty has gone from being an assumed, universal right to a contested and controversial concept, you’ll want to consult this book. Highly readable—thorough where it needs to be and brief where generalizations suffice—Pagans and Christians in the City gives us a solid overview of how we’ve gotten where we are and the nature of the challenges we face.

Kevin DeYoung
A New (Old) Blog
Life and Books and Everything: American History and the Historian’s Task with Wilfred McClay
Life and Books and Everything: What’s Going Right in the Church?
Justin Taylor
Do Humans Have Free Will? The Answer (Of Course) Is: It Depends!
Three Harms that Come from Redefining Marriage
The Scandal of the American Evangelical Intellectual
Erik Raymond
Preachers Should Measure Twice and Cut Once
Do Affections Provide Assurance?
A New Resource on an Old Confession
Ray Ortlund
Everything just so
The blessing we dread
The peace of Christ
LOAD MORE
Loading