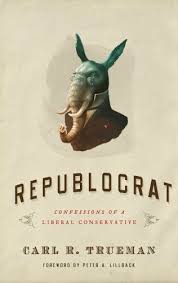 As far as I can tell, Carl Trueman is incapable of being dull. I haven’t had the privilege of sitting down for a tête à tête, so it could be that in real life he’s as interesting as a Lawrence Welk rerun. But I somehow doubt it. We’ve exchanged emails over the past months and invariably he throws in some piece of pith that makes me want to say, alternately, “Yes, Amen!” or, “I can’t believe you just said that!” Trueman is a professional provocateur, which I mean as a compliment. He loves to provoke, but never with sophomoric shock, always with wit, intelligence, and a writing style that seems to say “I’m British, and we invented this language.” I love reading Carl’s stuff because he not only writes so well and so memorably—who else is as adroit with ferrets, prostate clinics, and some business about bogs I didn’t quite understand—but because he loves to poke his friends as much as his enemies. Carl delights to skewer. I hereby dub him the King of Kebabs.

All of Trueman’s erstwhile poking and provocation are on display in his devastating, humorous, much-needed, over the top, occasionally unconvincing new book Republocrat: Confessions of a Liberal Conservative (P&R Publishing, 110 pp). First off, props (as the kids used to say) to Zach Franzen for the wonderful cover illustration. It’s hard to take your eyes of such a playfully-serious, hoity-toity, blueish-red donkeyphant. Good work P&R.

As for the book itself, Trueman’s basic these is “that religious conservatism does not demand unconditional political conservatism” (xvii). He’s worried “that the evangelical church in America is in danger of alienating a significant section of its people, particularly younger people, through too tight a connection between conservative party politics and Christian fidelity” (xx). This “beware of selling out to the Religious Right” alarm is not new, but perhaps conservative evangelicals will heed the message better coming from one of their own. Trueman is right to point out that American Politics is too often cast as a Manichaean struggle between good and evil where the good guys are on the side of the angels and the bad guys are as nuanced as Gargamel from the Smurfs. When Trueman argues that “on certain issues there is no obviously ‘Christian’ position” (18), I heartily concur. And I couldn’t agree more with his frequent insistence that Christians dig deeper into political issues, not believe everything they hear on Fox News or MSNBC, and learn to think for themselves (xxvi, 99).

As you might expect from one who relishes the thought that he “disappoint so many different groups of people in such a comprehensive manner” (xix-xx), Trueman doesn’t waste all his bullets on the Right. Though himself a liberal (of the old school variety he is quick to add), Trueman has little patience for evangelicals who parade their Democratic sympathies in a “Aren’t I naughty?” kind of way (15). He also laments that the Left’s notion of oppression has been psychologized to the point where oppression now refers to “somebody, somewhere, telling them they have to take responsibility for their own irresponsibility or that certain self-indulgent behavior is unacceptable” (19). The new Left, says Trueman, has lost all sense of proportion and “has become, by and large, the movement of righteous rhetorical pronouncements on total trivia” (18).

Trueman’s denouncing of the Left is sincere. He’s not pretending to be annoyed so he can move on to his real foe. He’s genuinely critical. But make no mistake: most of his criticism is for the Right, and much of it is needed.

In Chapter 2 Trueman argues that the America is more secularized than we realize. We may speak in religious categories, but the absurdity of The Patriot’s Bible or the stereotypes reinforced by LaHaye/Jenkins fiction marks a capitulation to secular values. More importantly, American Christians have too often confused “the policies of nations and the destiny of the church” (35). Trueman has no qualms with patriotism, but, he wisely cautions: “If I have to sign up to believe in the manifest destiny of the English-speaking people, or of a particular political project, in order to be a member of Christ’s church, or even simply to feel that I belong, then it is arguable that, whoever’s church it is, it is no longer the property of Christ but of some more earthly power” (36).

In Chapter 3 Trueman takes on Fox News. His frustrations are many: Christians are duped into thinking the channel is unbiased; alternative view points are rarely considered; the popular talking heads (e.g., O’Reilly and Beck) are sloppy, illogical grand-standing ninnies with a penchant for nonsense; and Rupert Murdoch, the media mogul who owns Fox News, is a bad dude. I don’t doubt all of this is true some (much?) of the time, but I’ll come back to this chapter in a moment.

In Chapter 4 Trueman laments our uncritical allegiance to capitalism, citing a familiar litany of offenses: it promotes greed, confuses economic prosperity with godliness, and has produced an ugly consumerism. And in Chapter 5 he outlines “the rise of aesthetics and the decline of discourse” across the political spectrum (83), by which Trueman means (in my own words) style has replaced substance, story has replaced serious thinking, and looks have replaced logic.

There is a lot to like with this book. It is well-written and sure to stir up conversation. On the whole, I think Trueman’s criticism of both the Right and the Left have merit. Christians do need to think more. We need to refrain from drawing ecclesiastical lines with political pencils. We need a little less us-versus-them rhetoric. We need to allow that good people work on the other side of the aisle. We need to recognize that not every issue has a quick and easy “Christian” solution. And even political conservatives need to take Fox News with a generous grain of salt.

Still, some parts of the book were less convincing than others.

1) As Peter Lillback points out in his entertaining foreword, at times Trueman’s case relies on straw men and overstatement. The Patriot’s Bible and LaHaye/Jenkins are pretty easy pickins and not representative of any serious political conservatism. Neither are Beck and O’Reilly for that matter. Of course, they’re popular on the Right and more influential with the rank and file than, say, First Things, so it’s appropriate Trueman would mention them frequently, but I question if this approach will win many converts. Conservatives into Hayek and Novak won’t find the Fox News takedown compelling, and, on the other, pulling one excerpt from Beck and one from O’Reilly is not going to convince the diehards that their favorite pundit is off his rocker.

2) For all that Trueman does to warn against conspiracy theories, he manages to dump in a couple of his own (just playing by their rules he would probably argue). For example, he suggests that Bush’s “Vietnam record” has “a whiff of elite string-pulling about it” (90). More egregiously, Trueman slides off the rails a bit with his suggestion that Rupert Murdoch and Fox schedule The Simpsons at 6:00pm each evening on the east coast in an effort to undermine the traditional family meal time (54). First of all, I have to imagine the decisions about when to schedule syndicated programs rests with local affiliates and has nothing to do with Rupert Murdoch. And besides, syndicated programs almost always run during the dinner hours because those are the non-primetime hours to choose from. The chapter on Fox News was one of the most important, but also one of the most exaggerated. True, conservatives give too much allegiance to Fox News. A stern warning is in order and I’m grateful for it. But to suggest conservatives unthinkingly embrace everything on Fox stations (55) and to insinuate that bad Mr. Murdoch makes almost everything on Fox News equally bad is a bridge too far.

3) Trueman’s secularization thesis does not ring true for me, at least not entirely. I agree that America’s religious fervor is, at times, no better than Europe’s religious vacuum. But I’m not convinced by all of Trueman’s connections. He seems to think the Right’s radical individualism is at least partly to blame for (1) positive thinking preachers, (2) the lack of church discipline, and (3) the rise of celebrity “confessional superstars.” I would argue the first is much older than the ascendancy of today’s Right, the second is owing to a number of factors but scarcely less problematic in Leftish churches (in fact, I’m quite sure the American churches that practice discipline are, on the whole, on the friendliest terms with the Right), and the third—which dates back to Billy Sunday, D.L. Moody, George Whitefield, and the church at Corinth—is on the rise (assuming it is) because of the new media more than anything else.

4) I’m sure Trueman has more he could say on these issues (quite sure of that!), but political conservatives will find his analysis on certain topics a tad superficial. His critique of capitalism (which he admits is the best economic system we know of) is largely a critique of consumerism (73). The two are not identical and the greed evident in the latter runs rampant in any system. He doesn’t give careful consideration to the notion of liberty that is so important to conservatives when advocating for private enterprise rather than government-run endeavors (like nationalized health care which Trueman supports). And one could argue he is too cynical in assessing why politicians on the Right oppose abortion and how much good pro-life politicians have done for the pro-life cause.

Ray Ortlund
Psalm 1, a reverse translation
Happy beyond description
Why I Got out of Twitter
Erik Raymond
He Is Not Ashamed
How to Get More Out of Church
Recent Reads: April & May
Trevin Wax
Some Personal Announcements Before Signing Off
5 Quick Takes for New Culture Wars
Truthful Witness in the Public Square
Justin Taylor
Chuck Colson: A Life Redeemed
What Mother Teresa Told the Supreme Court: “Your Decision in Roe v. Wade Has Deformed a Great Nation”
How Are We Doing on This, Evangelicals?
LOAD MORE
Loading