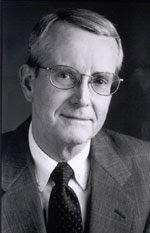 Today is the 400th birthday of John Milton, the Puritan literary giant who wrote Paradise Lost.

Leland Ryken serves as Clyde S. Kilby Professor of English at Wheaton College, where he has been a member of the faculty for 40 years. Dr. Ryken did his dissertation on The Apocalyptic Vision in Paradise Lost, has co-edited an academic book on the book, and has taught it for years. (His most accessible introductory guide to Paradise Lost is found in his book The Realms of Gold: The Classics in Christian Perspective.) So I thought it would be fitting to ask him a few questions about the classic:

When did you first read Paradise Lost?

I wish you had not asked. A high school English teacher challenged me to read Paradise Lost during Christmas vacation of my sophomore year. I was a farm boy from an unsophisticated background. I was totally lacking in the critical tools by which to understand the dynamics of an epic poem. For reasons that still mystify, Milton was absent from my undergraduate education. During the summer preceding my enrollment in graduate school, knowing that the chair of the department to which I was headed was a world-class Milton scholar, I studied Milton on my own. Upon arriving at the University of Oregon, I had a month to study before classes started, and I happened upon C. S. Lewis’ A Preface to Paradise Lost in the campus bookstore. I read it and was only half a step from becoming what in my profession is called a Miltonist.

Did it have an immediate impact on you, or did that come only through subsequent readings?

Once I had the literary sophistication to understand how epic poetry works, the impact was immediate.

Let’s start with the basics. When was Paradise Lost written, and what is it about?

We know from scattered references in Milton’s prose works that he aspired to write the great English epic and great Christian epic already during his college days of the 1620s. His choice of an epic subject kept evolving over the next 25 years, and he started writing the poem on the story of early Genesis at the approximate age of 50. Most of the poem was during a five-year span from 1658-1663. Milton wrote the entire poem after his blindness became total, and he wrote part of it literally in hiding, fearful for his life when the monarchy was restored in 1660 (Milton had been the leading intellectual spokesman for the Puritan revolution). The poem was first published in ten books in 1667 and then reissued in twelve books in 1674.

What type of poem is Paradise Lost?

Ostensibly Paradise Lost is an epic poem (Milton himself never calls it an epic but instead refers to it as a “heroic poem”), modeled on the classical epics of Homer and Virgil. But Milton’s Christianity led him to revolutionize the value structure of classical epic, with the result that today it is common to call Paradise Lost an anti-epic as well as an epic. Milton regarded his classical predecessors as both models to be imitated and rivals to be surpassed.

What style is it?

The style of Paradise Lost is the epic high style. It so grand that the world of literary scholarship long ago pinned the label “the Miltonic style” on it, in tribute to its unique grandeur.

How is it organized?

Many structural schemes are evident. The story itself is simplicity personified: being a story of crime and punishment, the plot is organized on a threefold scheme of the antecedents, occurrence, and consequences of the fall of Adam and Eve. Externally, the poem is divided into twelve books. With a little streamlining, we can see that these twelve books are arranged as pairs of books: Satan and hell, heaven and Paradise, war in heaven, creation of the earth, temptation and fall, a vision of fallen human history.

What are some of the misconceptions readers have about Paradise Lost?

The most frivolous misconception is also the most widespread, namely, that Satan is a heroic and sympathetic character in Milton’s story. Such a verdict is actually self-revealing on the part of a reader who accepts it (for more on this, see Stanley Fish’s landmark book Surprised by Sin: The Reader in Paradise Lost).

Another misconception is that book is too difficult for a modern reader to understand and enjoy. The best refutation of this fallacy is to sit down and start reading the poem aloud.

What are some reading strategies you would recommend for reading the poem?

What would you say to those who think reading this epic poem is not worth their time and study?

As a Miltonist who did his dissertation on Paradise Lost, has written on it, and has delivered addresses at conferences on it, my very favorite piece of commentary on the poem is the opening sentence of a written testimony of someone who was applying for membership at Tenth Presbyterian Church in Philadelphia: “I was led to the Lord by John Milton.” Specifically, this person was converted as a result of reading Paradise Lost.

Kevin DeYoung
A New (Old) Blog
Life and Books and Everything: American History and the Historian’s Task with Wilfred McClay
Life and Books and Everything: What’s Going Right in the Church?
Thomas Kidd
From ‘Wretched’ to ‘Needy’: Changing a Classic Hymn
Christianity, Warfare, and American National Identity: An Interview with Benjamin Wetzel
Is the Declaration of Independence a Christian Document?
Ray Ortlund
The peace of Christ
Psalm 1, a reverse translation
Happy beyond description
Scotty Smith
Are We More Like a Porcupine or a Golden Lab?
Getting the Help We Need
What Wondrous Love IS This?
LOAD MORE
Loading