Douglas Sweeney has been named the new dean of Beeson Divinity School at Samford University in Birmingham, Alabama, succeeding the school’s founding dean, Timothy George, who had served in the position since the school’s inception in 1988. (You can read Collin Hansen’s appreciation of Timothy George over at the TGC main page.) 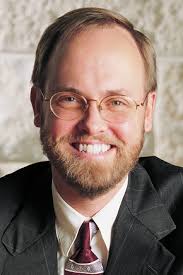 Dr. Sweeney and his wife, Wilma, currently reside with their son, David, in Lindenhurst, Illinois, where they are members of St. Mark Lutheran Church.

Sweeney received his BA in history from Wheaton College in 1986, an MA in the history of Christian thought from Trinity Evangelical Divinity School in 1989, and then an MA in religion at Vanderbilt University, where he also received his PhD in religion in 1995.

From 1995 to 1997 he served at Yale University, where he edited The Works of Jonathan Edwards and lectured in church history and historical theology.

In 1997, he returned to his alma mater of Trinity Evangelical Divinity School, where he has served until now, rising through the ranks:

Sweeney is one of the world’s leading experts on the life and work of Jonathan Edwards.

His books on Edwards include:

Sweeney is currently President of the Conference on Faith and History.

May the Lord bless this brilliant and humble man as he brings this perspective to his new role at leading Beeson Divinity School.