I recently asked David if he would author a guest post for Between Two Worlds that would give us a reference point for the size of the Ancient Near East (that is, the world of biblical geography). — JT

As I have studied and mapped the events of Scripture over the years, I have been struck by an intriguing paradox:

The world of the Bible was at the same time very small and very large.

On the one hand, a large amount of Scripture is set within the context of the tiny land of Israel, which spanned a mere 200 miles (320 km) from north to south—roughly the size of the state of New Jersey (shown in green outline on the map below). 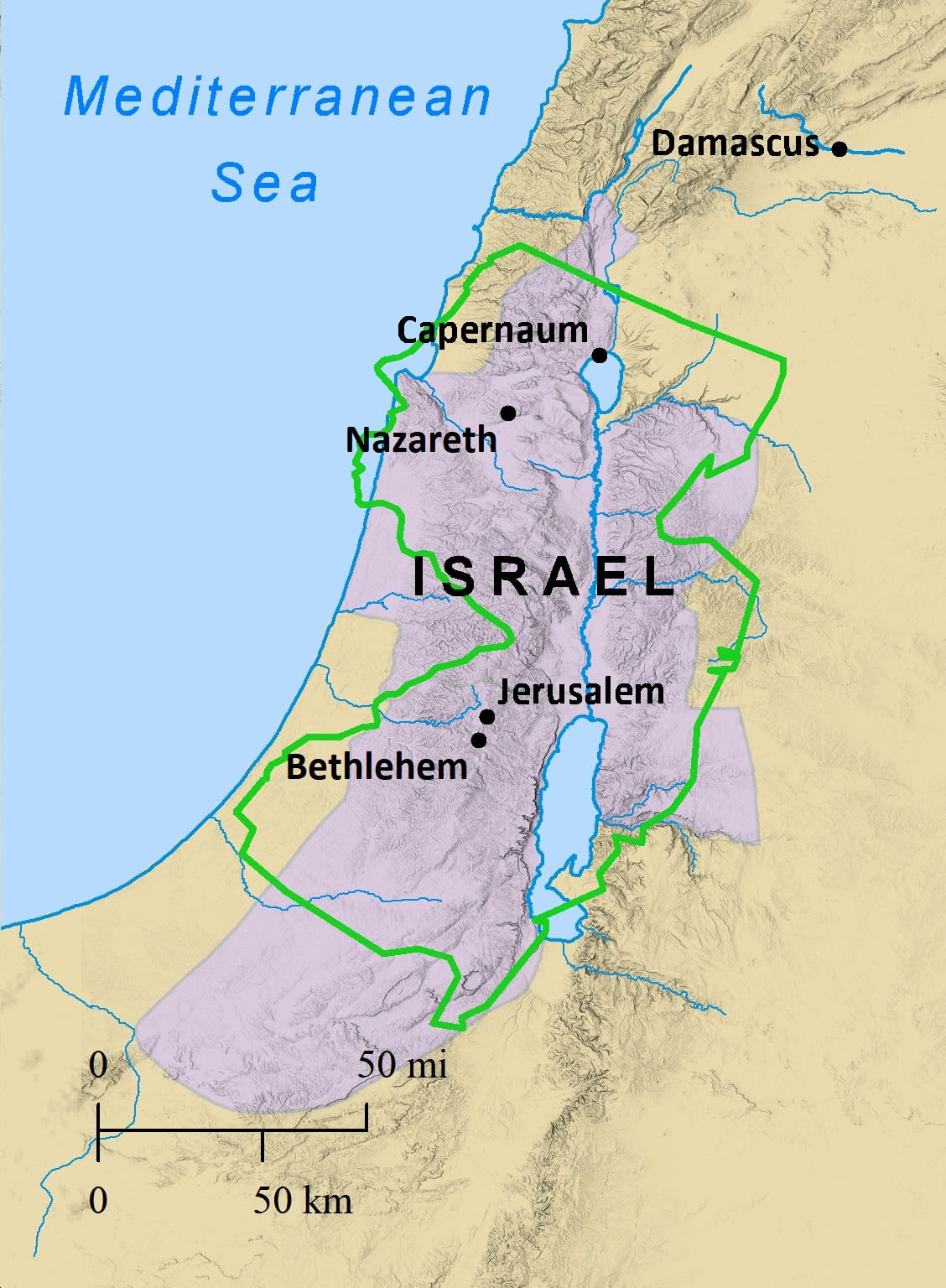 Even in the New Testament era, when the world was far more interconnected under the vast Roman Empire, nearly all the recorded events of Jesus’s life took place within about 65 miles of his hometown of Nazareth—a distance that could be traversed by foot in three or four days.

At the same time, it is easy to overlook just how large the world of the Bible is as well.

All too often modern people incorrectly write off the peoples of the ancient world as largely ignorant of lands and peoples beyond their own nation and the nations that immediately bordered them. We assume that these ancient peoples would not have been aware of civilizations thousands of miles away, nor would they have traveled to these lands or had regular contact with them.

Yet, a careful look at Scripture, as well as the broader historical record, speaks otherwise.

As far back as Genesis 10, in the Table of Nations, the writers of Scripture referred to places possibly as far west as Italy and as far east as Iran.

They spoke of peoples as far north as the Caucasus Mountains above the Black Sea and as far south as Sudan, Ethiopia, and Yemen.

Even Israel’s own origins are clearly spelled out as being rooted in the land of Mesopotamia, and Israel’s identity as a people was tightly bound to their deliverance from Egypt.

Likewise, every Israelite upon entering the Promised Land was to make an offering to God and personally recite how his father was “a wandering Aramean” from Ur who “went down to Egypt and sojourned there” until the Lord delivered his people (Deut. 26:5–10).

Israel itself was ideally positioned as an international travel corridor in the Ancient Near East. It controlled a section of the thin ribbon of traversable land between the great civilizations of Egypt, Anatolia, and Mesopotamia, and a prominent Arabian spice route terminated along the southern edge of Israel at Gaza for distribution throughout the Mediterranean world. David’s kingdom included most of this corridor, and Solomon extended it even further to the Euphrates River. Solomon also sent out trading ships to places essentially regarded as the ends of the earth, bringing back treasures from as far away as perhaps India. It appears that Solomon also engaged in a sort of international arms trade, buying horses and chariots from Egypt and Cilicia and selling them to the Hittites and the Arameans. These ventures, combined with his control of the trade routes, made him extremely wealthy—and apparently very famous.

The queen of Sheba, from her kingdom more than a thousand miles away in southern Arabia, personally traveled to Israel to meet Solomon and see his famed accomplishments (1 Kings 10).

The international scope of biblical events continued to grow throughout the Old Testament, as the divided kingdoms of Israel and Judah increasingly became entangled in the machinations of the superpowers of the ancient world. Many of the oracles of the Major and Minor Prophets directly address these nations or the effects they had on Israel and Judah. After Israel was exiled throughout the Assyrian empire and Judah was exiled to Babylon, the Persians came to dominate virtually all of the Ancient Near East, eventually ruling over a domain that was eight-times the size of Texas (which is shown in red outline on the map at the top of this post). This vast empire—the largest the world had ever known up to this time—was the world of Ezra, Nehemiah, Esther, Daniel, Malachi, and others.

By the time of the New Testament, the biblical world was largely dominated by the powerful Roman Empire, which ruled the entire Mediterranean world. Paul himself was a Roman citizen and traveled extensively through the empire, possibly even as far as Spain (Rom. 15:24–28), and tradition holds that most of the apostles eventually carried the good news of Jesus Christ throughout the known world, including India.

Comparing It to Our World

The more I come to understand the world of the Bible, the more I become convinced it was actually not that much different from our own world in some respects. Certainly the world has undergone great changes in technology, communication, and transportation since Bible times, yet at the same time we’re still typically enveloped by a fairly small day-to-day existence.

Most of us get up each morning and go through the same routine every day; we go to work and talk with the same people that we talk to every day; and we often face the same basic struggles month after month, year after year. Yet we would be mistaken if we were to conclude that our world really is as small as it often seems. Undoubtedly the handful of simple fishermen who followed Jesus from village to tiny village in the backwoods hills of Galilee never fully realized the future effect of their seemingly menial deeds. Yet their faithful obedience to Jesus day in and day out eventually reaped an immeasurable spiritual harvest throughout the entire world.

May each of us see ourselves the same way—living lives in a world that is both small and very, very large, for the glory of God.