Some of the best Luther quotes are things he didn’t actually say or didn’t say in quite that way. Some of them capture his basic thought, while others represent things he would have disagreed with.

If I believed the world were to end tomorrow, I would still plant a tree today.

The maid who sweeps her kitchen is doing the will of God just as much as the monk who prays—not because she may sing a Christian hymn as she sweeps but because God loves clean floors.

The Christian shoemaker does his Christian duty not by putting little crosses on the shoes, but by making good shoes, because God is interested in good craftsmanship.

Luther didn’t say this, either. Frederick Gaiser argues that it doesn’t sit well with Luther’s actual views on vocation. The idea that God is pleased with our work because he likes quality work “would be the American work-ethic version of vocation, theologically endorsing work as an end in itself. In the hands and mouth of a modern boss, good craftsmanship and clean floors (or a clean desk or a signed contract) to the glory of God could be a potent and tyrannical tool to promote the bottom line. . . . [W]hat marks Luther’s doctrine of vocation is the insistence that the work is done in service of the neighbor and of the world. God likes shoes (and good ones!) not for their own sake, but because the neighbor needs shoes. . . .” On the other hand, Robert Kolb writes, “I think he comes closer to the Puritan ideal of quality work in the horizontal realm and believed that while faith in Christ provides the key to good works in God’s sight in one sense, God also created human beings to produce quality.” In either event, he didn’t say this quote attributed to him.

If I profess with the loudest voice and clearest exposition every portion of the Word of God except precisely that little point which the world and the Devil are at that moment attacking, I am not confessing Christ, however boldly I may be professing him. Where the battle rages there the loyalty of the soldier is proved; and to be steady on all the battle front besides, is mere flight and disgrace if he flinches at that point.

Luther didn’t say this exactly, but this one is closer. Denny Burk looked into this one:

“Also it does not help that one of you would say: ‘I will gladly confess Christ and his Word on every detail, except that I may keep silent about one or two things which my tyrants may not tolerate, such as the form of the Sacraments and the like.’ For whoever denies Christ in one detail or word has denied the same Christ in that one detail who was denied in all the details, since there is only one Christ in all his words, taken together or individually.”

As you can see, this does not match the first quotation, though the sentiments described in the former are similar to the latter.

I’d rather be ruled by a wise Turk than by a foolish Christian.

Luther didn’t say this one. On Gene Veith’s blog, Carl Vehse offers an extended analysis. Here is his conclusion: “Luther would never have uttered the falsely attributed quote and would never regard as a preferable desire or choice to be ruled by a Turk. The false quote . . . is not ‘Luther-esque’ and in fact, it is diametrically opposed to the position on which we know from his writings Luther firmly stood.” Robert Kolb, while agreeing the quote is apocryphal, does think it has a kernel of truth in it: “He did have a concept of civil righteousness that, in distinction to the active righteousness that flows from God’s gift of passive righteousness, has other motivations that trust in Christ, but that still contributes to good order in the world. That is why the alleged quotation on the Turk has a kernel of truth even though Luther often expressed harsh criticism of the tyranny and marriage practices of the Ottomans.”

Justification is the article by which the church stands and falls.

This one is close.

From what I can tell, the first use of this exact Latin phrase (justificatio est articulus stantis et cadentis ecclesiae) seems to be by Lutheran theologian Balthasar Meisner—born 40 years after Luther’s death—who said that it was a “proverb of Luther” (Anthropôlogia sacra disputation 24 [Wittenberg: Johannes Gormannus, 1615]).

“The article of justification is said to be the article by which the church stands or falls.”

We don’t have record of Luther using the exact phrase, but what he did say is close:

So the famous version is more like a summary or paraphrase of his actual quote.

Here I stand; I can do no other.

Diarmaid MacCulloch, in his magesterial work on the Reformation, calls this the “most memorable thing Luther never said.” Many scholars believe that it was first inserted at the end of Luther’s speech by the first editor of his collected works, Georg Rörer (1492–1557) and in Ludwig Rabus’s martyrology from the mid-1550s.

But this one certainly ranks as Lutheresque. It is something he certainly could have said. Or, as Robert Kolb tells his students, “By now Luther wishes he had said it.” 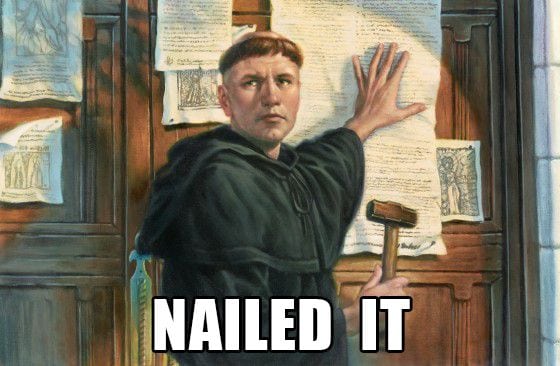 Well, this one he might have said. Further research is required to establish its veracity.