Amid everything else Charles Taylor’s A Secular Age attempts to accomplish, at its base, it helps the spiritual leader see that our modern society has come to embrace “self-sufficient humanism.” According to Taylor, “I mean by this a humanism accepting no final goals beyond human flourishing, nor any allegiance to anything else beyond this flourishing. Of no previous society was this true” (A Secular Age, 18).

In other words, our neighbors don’t find meaning and significance in anything beyond the immanent sphere—beyond success, sex, power, and relationships. Yet, at the same time, there is a “malaise” amid this self-sufficient humanism: “The sense can easily arise that we are missing something, cut off from something, that we are living behind a screen. . . . I am thinking much more of a wide sense of malaise at the disenchanted world, a sense of it as flat, empty, a multiform search for something within, or beyond it, which could compensate for the meaning lost with transcendence” (302).

There is a fear and anxiety that “our actions, goals, achievements, and life, have a lack of weight, gravity, thickness, substance. There is a deeper resonance which they lack, which we feel should be there” (307). There is, then, a temptation among the secular toward transcendence. We cannot seem to live without it.

There is a temptation among the secular toward transcendence. We cannot seem to live without it.

The task of the preacher, it seems, is to aim at this dual temptation. We speak to the longings of those outside the faith and the wanderings of those inside. Taylor is a guide of sorts for pastors, providing an imprecise description of how our hearts have been formed as a society. I don’t say “imprecise” in critique; I’m simply observing that what he says about society in general, pastors will have to explore in particular through personal stories and histories.

Within Taylor’s 800 pages can be found helpful narratives and categories that provide deeper insight into our cultural moment. We have become a disenchanted age, and Taylor shows us why and how.

I want to narrow down three basic elements of Taylor’s project that will seem more immediate for pastors and preachers in their work: (1) The Buffered Self, (2) The Malaise of Modernity, and (3) The Age of Authenticity.

The basic difference between a buffered self of the modern age and a porous self of earlier eras is the question of vulnerability. In previous centuries, it was assumed that we were vulnerable to spirits, both evil and good, and could be a affected by the “presence” of something beyond the human and physical. For example, not only did Martin Luther throw ink wells at the Devil while he translated the New Testament in the 16th century, he also ministered to communities who believed the forest was enchanted with ghosts and goblins. Ancients and pre-moderns believed in an enchanted world and saw themselves as vulnerable and porous selves. The powers could be malevolent or benevolent, pagan or Christian. A porous self sees not only that he is vulnerable to danger from these powers; a porous self also gains meaning and significance from outside himself.

But this sense of vulnerability has disappeared with the buffered self. “Things beyond don’t need to ‘get to me’” (38).  A buffered self “sees itself as invulnerable, as master of the meaning of things for it” (38).  That last sentence is important: The self becomes the “master of the meaning of things.” In other words, belief in God has not completely disappeared; we simply no longer need him for meaning and significance. A buffered self “blocks out certain ways in which transcendence has historically impinged on humans, and been present in their lives” (239). To put it more directly, here we have what Robert Bellah calls “expressive individualism” (Habits of the Heart: Individualism and Commitment in American Life).

Christianity is not a means to human flourishing. In fact, Christianity instructs us to die to self, consider others more important, turn the cheek, offer ourselves as a living sacrifice, enter into weeping and sadness with others. This, of course, creates a conflict with the modern buffered self. The buffered self sees God and neighbor as enhancements that we can take or leave when they become burdensome or demand sacrifice. Christianity sees them as obligations rather than enhancements. Meaning, morality, and satisfaction come from without the self in Christianity. A buffered self seeks all that from within.

Christianity is not a means to human flourishing. In fact, Christianity instructs us to die to self, consider others more important, turn the cheek, offer ourselves as a living sacrifice, enter into weeping and sadness with others.

Pastors and other church leaders must recognize that their neighbors have internalized this way of thinking and often view any religious commitments as intruding on their self-sufficiency. But we must also see that our churches are potentially filled with people who see their current church commitments and investments into community as enhancements to their flourishing. When these “enhancements” begin to impede our “flourishing” by asking for sacrifice and demanding discomfort, the temptation will be to put off faith as an intolerable intruder to their buffered self. This may not be a conscious or explicitly stated condition. But it is the way hearts are formed in the West today, whether or not someone is religious.

A buffered self offers many benefits. It provides a sense of freedom from the traditional mores of authoritarian societies and the “unenlightened masses,” a “sense of power, of capacity, in being able to order our world and ourselves,” a sense of invulnerability that takes away a fear of a world of spirits and forces, a “sense of self-possession, [and] a secure inner mental realm” (300-301).

However, with that freedom comes a sense of “missing something, [being] cut off from something, [like] that we are living behind a screen” (302). It is what Taylor calls a sense of “malaise,” which senses the world to be a flat, empty place, where what we’ve gained with our buffered selves doesn’t compensate for what we’ve lost with transcendence.

First, we struggle to find significance in life. How do we gain a “higher goal” that transcends and gives meaning to all the lower ones? You could say, without a telos from some transcendent place outside ourselves, our lives have a fragility of meaning. Is my life going somewhere? A minister will need to consistently point to the fragility of meaning outside of transcendence.

Second, crucial moments in life such as birth, marriage, and death heighten the sense of malaise. Traditionally, we have solemnized these moments by connecting them to something transcendent. “But an enclosure in the immanent leaves a hole here. Many people who have no other connection or felt affinity with religion, go on using the ritual of the church for these rites de passage” (309). Third, we perceive a lack in everyday moments, in the mundane. “[S]ome people sense a terrible flatness in the everyday, and this experience has been identified particularly with commercial, industrial, or consumer society” (309). There is an “emptiness to the repeated, accelerating cycle of desire and fulfillment in consumer culture” (309). We, as buffered selves, sense a malaise, but because we seek solutions from within the immanent frame, our solutions do not work.

Pastors and other spiritual leaders must recognize and show their congregations the unsatisfying end of the buffered self, which sees human flourishing as its ultimate commitment and all other commitments (communal or religious) as mere enhancements that can be discarded when they no longer enhance. The buffered self ultimately alienates us from meaning, satisfaction, intimacy, and love.

The buffered self ultimately alienates us from meaning, satisfaction, intimacy, and love.

A buffered self has been freed from transcendence and all its moral and religious obligations, but it has also been emptied of fullness along the way, leaving only a nagging sadness. The pastoral work for ministers is to tempt the secularist with fullness and joy to follow Christ, who had joy set before him, even while he set aside human flourishing as he endured the cross (Heb. 12:2). Christians have known all along that human flourishing (or fullness) comes indirectly. Christianity teaches that if you die to yourself and participate with Christ in faith and obedience, you get human flourishing in the form of joy, a fruit of the Spirit. But if you aim at human flourishing, you will only get malaise.

“Let’s call this the Age of Authenticity,” Taylor says (476). We’re committed to personal human flourishing, and we find that flourishing within ourselves. So our spirituality must be driven by “authentic” emotions that come from within, never from mere obedience or “theological correctness” (448). Our sexuality, likewise, is faithful primarily to internal desires, not to cultural or moral expectations. To put it differently, our modern secular culture disciples our hearts to be true to ourselves, to reject all outside intrusions.

There is a form of authenticity that attracts Christians and churchgoers without reference to Christian ethics. This authenticity boasts of the “weakness” or “messiness” of life. Leaders can gain a following by showing the “raw” elements of their life, the imperfections, the “beauty of the chaos.” But this too is often a form of the buffered self. These confessions of imperfection come on our own terms. It is a laissez-faire spirituality that boasts of weakness but is buffered from criticism and reproof. Christianity is quite different. Christianity, too, boasts of weakness (see the apostle Paul), but makes the self vulnerable (different from merely authentic) to change and transformation.

None of these three elements will necessarily surprise the Christian minister. The Bible shows that these issues are more ancient than uniquely modern. Yet Taylor shows us how they manifest themselves today and how we might aim the truth of Christ with more precision. The Bible already warns us the self is impoverished apart from the riches of Christ. Taylor, however, shows us how individuals in Western society are feeling the impoverishment, even though they may not articulate it that way. He gives the pastor or church leader tools to tempt buffered selves with fullness of joy. 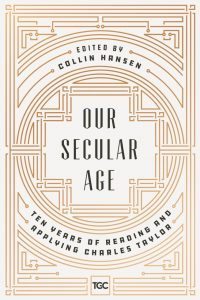 Editors’ note: This is an excerpt from Our Secular Age: Ten Years of Reading and Applying Charles Taylor, now available at Amazon (Kindle | Paperback) and WTS Books. Other excerpts: