In Torn: Rescuing the Gospel from the Gays-vs.-Christians Debate, Justin Lee recounts his journey from being raised in a loving, two-parent, Southern Baptist home where he was convinced that the Bible clearly condemned homosexual sex, to now believing that God blesses same-sex unions. Lee identifies as an evangelical who believes the gospel, which is “a personal relationship with Jesus and salvation through his death and resurrection.” Currently, he’s the founder and executive director of a nonprofit organization called The Gay Christian Network.

The premise of Torn is that the gays-vs.-Christians cultural debate is tearing apart the church not externally, but internally. The battle lines have been drawn. On the one side are Christians who espouse the traditional view of sexuality, and on the other are Christians who believe homosexual sex is not inherently sinful. One side shouts, “More truth”; the other side, “More love.” Is there a solution to this impasse? For Lee, the answer is more love.

Lee explains the church has failed in its responsibility to extend Christ’s love to gays and lesbians. Evangelicals are often perceived as being against gay people and quick to lecture about how they’re living in sin. Yet, Lee points out, Jesus spent time with outcasts and sinners. “If even [Jesus] could meet sinners . . . how much more should we Christians—all sinners ourselves—treat [gays]?”

I agree with Lee that vitriol and venom often accompany the discourse from both sides and that believers must be more loving. But what does “more loving” mean? If homosexual sex and same-gender romantic relationships are sinful, then wouldn’t the most loving thing be to help people not sin in this way? Or, if God blesses homosexual unions, then shouldn’t we affirm these unions also?

My journey couldn’t have been more different from Lee’s. I wasn’t raised in a Christian home, though my parents became believers after I came out in dental school. I, however, headed in the opposite direction. They prayed for a miracle—not that I’d become straight but that I’d surrender my life to Christ. After several years of heartache, I landed in federal prison for drug-dealing and found a Bible in a trashcan.

With plenty of time on my hands, I began reading God’s Word and disclosed my past to a prison chaplain. To my surprise, he told me the Bible doesn’t condemn homosexuality and gave me a book to read. With much curiosity, I took the book in the hopes of finding biblical justification for homosexual sex and committed same-sex unions. I had that book in one hand and the Bible in the other. I had every reason to accept the book’s assertions to justify same-sex relationships. But God’s indwelling Spirit convicted me that this book was distorting his Word. 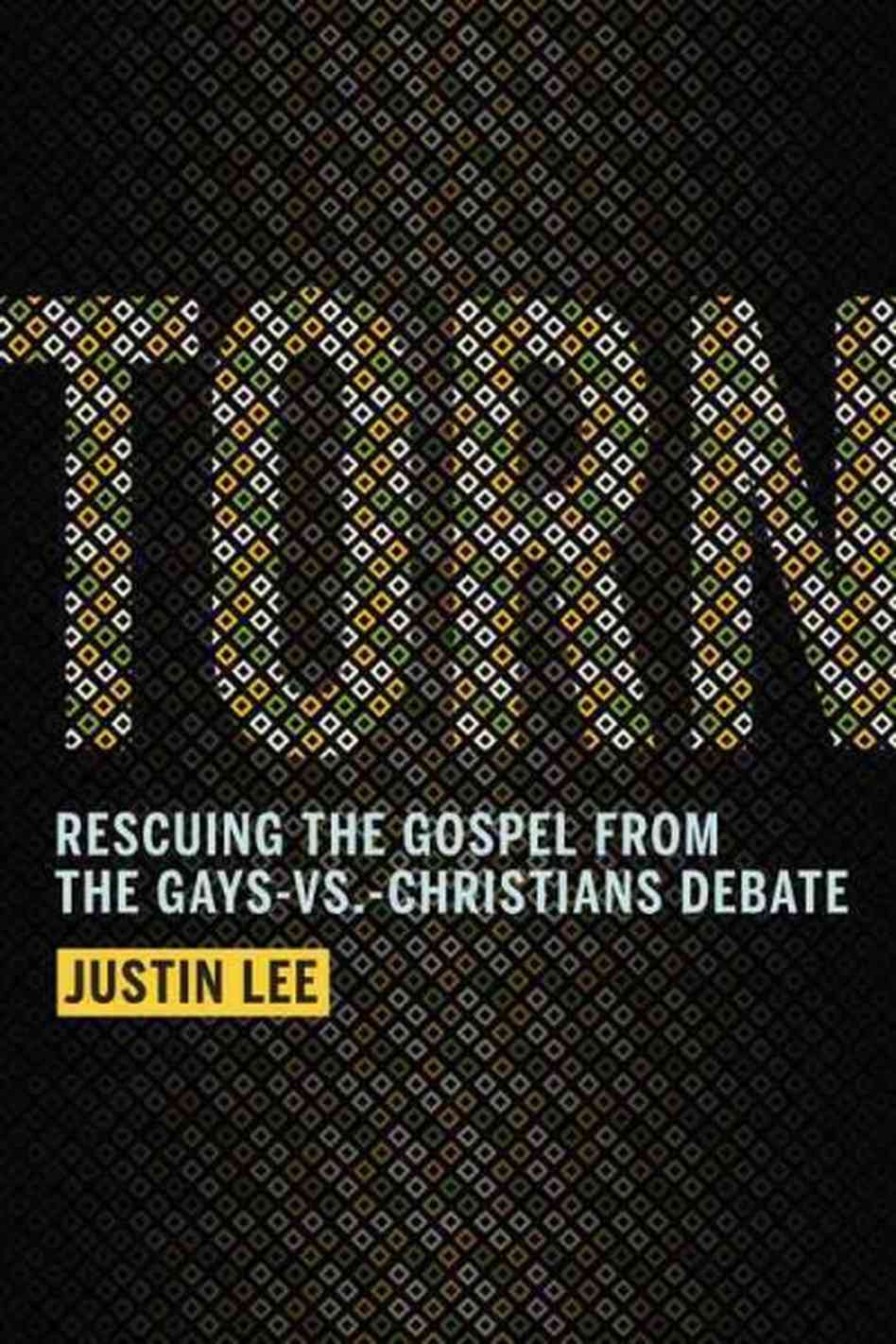 Torn: Rescuing the Gospel from the Gays-vs.-Christians Debate

Torn: Rescuing the Gospel from the Gays-vs.-Christians Debate

As a teenager and young man, Justin Lee felt deeply torn. Nicknamed “God Boy” by his peers, he knew that he was called to a life in the evangelical Christian ministry. But Lee harbored a secret: He also knew that he was gay. In this groundbreaking book, Lee recalls the events—his coming out to his parents, his experiences with the “ex-gay” movement, and his in-depth study of the Bible—that led him, eventually, to self-acceptance.

I eventually realized I’d put great emphasis on “being gay.” Now I needed to place my primary identity in Christ. Although Lee limits the semantic range of “gay” to mean “generally attracted to members of the same sex, not members of the opposite sex,” the word has a broader meaning and significance—especially in phrases like “gay pride,” “gay rights,” “gay culture,” “gay marriage,” and “gay community.” Newfound identity in Christ compelled me to live in obedience to God whether my temptations changed or not. The gospel is about more than just correct beliefs; it leads to correct living as a result of correct beliefs. Biblical change is not the absence of struggles but the freedom to choose holiness in the midst of our struggles.

How the Bible deals with homosexuality is the real crux of the matter. Lee believes Scripture doesn’t condemn committed, same-sex unions. This is where I disagree with him most clearly. The Bible doesn’t give us a single example of a committed, homosexual union. Additionally, from Genesis to Revelation, marriage is affirmed to be between a man and a woman, with Jesus himself stating that God “made them male and female . . . and the two shall become one flesh” (Matt. 19:4–6; Mark 10:6–8; cf. Gen. 1:27; 2:24). For Lee, however, the Bible when read in its “historical, cultural, and biblical context” only condemns inhospitality and gang rape (Gen. 19), homosexual cult prostitution (Lev. 18:22; 20:13; Rom. 1:26–27), and homosexual pedophilia (1 Cor. 6:9; 1 Tim. 1:10). In each text, Lee adopts the narrowest interpretation and restricts the passages to condemn only exploitive forms of homosexual sex. Regrettably, he misses crucial contextual issues that support universal condemnation of such behavior.

Lee cites Ezekiel 16:49—“Behold, this was the guilt of your sister Sodom: she and her daughters had pride, excess of food, and prosperous ease, but did not aid the poor and needy”—as evidence that Sodom’s sin wasn’t homosexuality, but gang rape and inhospitality. However, there is simply no evidence in Ezekiel that the sin was specifically gang rape. There are Hebrew words for rape, such as ana in Genesis 34:2 or shagel (Nifal stem, “being violated”) in Zechariah 14:2. But Ezekiel did not use these words. Moreover, reading this passage in context, one discovers the ensuing verse: “They were haughty and did an abomination” (Ezek 16:50). In Hebrew, “abomination” is toevah and “did” is asah. These two words appear next to each other not only in Ezekiel 16:50, but also in Leviticus 20:13. The prophet Ezekiel, inspired by the Holy Spirit, used these two words to connect Sodom’s sin with Leviticus 20:13. This is inconsistent with Lee’s restrictive suggestion that Leviticus 20:13 only condemned homosexual cult prostitution.

Similarly, Lee restricts Romans 1:18–32 to condemn only a “specific group of people” who first turned to idolatry and then participated in homosexual fertility rites in pagan temples. There are several contextual problems, however, with this interpretation. First, the biblical context of the passage has a dual focus summed up in Romans 3:9: “All, both Jews and Greeks, are under sin.” Romans 1:18–32 focuses on Gentiles generally known for idolatry and homosexuality, and Romans 2:1–3:8 focuses on Jews. If 1:18–27 was about idolaters participating in sex rites, then the ensuing list of sins in 1:28–32 (e.g., greed, envy, gossip, disobedience to parents, etc.) must also refer to them—which is highly improbable. Even Lee admits that 1:28–32 refers generally to people who have turned from God. Second, the use of “unnatural” (para fusin) in connection with sex between men was familiar to Hellenistic Jews during the Greco-Roman period, as evidenced in the writings of Plato, Philo, and Josephus. Third, Romans 1:26 is the only explicit condemnation of sex between women in the Bible. Regrettably, Lee restricts this passage to condemn only homosexual cult prostitution despite the fact there exists no evidence in extant Greco-Roman literature of lesbian cult prostitutes—only of female cult prostitutes engaging in heterosexual sex.

Moreover, Lee believes 1 Corinthians 6:9 and 1 Timothy 1:10 could refer either to homosexual cult prostitution or pederasty. There existed specific Greek words for male cult prostitutes, however, such as teliskomenos or kadesim (cf. Deut. 23:17–18; 2 Kgs. 23:7 LXX), and for pedophiles, such as paiderastes (Plato, Symposium, 192b). Paul didn’t use any of these specific terms but rather the general one, arsenokoitai (a compound coinage from Lev. 18:22 and 20:13 LXX). This suggests the apostle wasn’t limiting or restricting the condemnation of homosexual sex, but instead was reappropriating its universal prohibition from the Old Testament.

Toward the end of Torn, Lee offers some practical advice as a way forward. I agree both sides need to extend grace, even in the midst of disagreement. I especially concur with Lee that celibacy must be promoted as a viable option—but for all, not just for those experiencing same-sex attraction. Sadly, singleness is sometimes equated with immaturity. Certainly some singles must put aside their childish ways, but I believe one of the missing links in ministering to those experiencing same-sex attraction is the reclamation of godly singleness. We must celebrate the men and women in our congregations who glorify God through their singleness as beautiful examples of faithfulness and devotion.

I also agree with Lee that gays and lesbians should be welcome within the church—as all sinners should be welcome. However, he proceeds to assert that gays affirming same-sex unions should be “supported at all levels of the church” and allowed “to follow their consciences” rather than being disciplined over homosexuality. Lee believes Paul disciplined the man sleeping with his father’s wife (1 Cor. 5) because this was “universally recognized as sinful” by both Christians and pagans. He contends that Romans 14 presents a different standard regarding the practice of eating food sacrificed to idols, since that wasn’t universally recognized as sinful. He then draws a parallel between food sacrificed to idols and homosexuality. I disagree. All food has been explicitly declared clean by God (Acts 10:15), whereas homosexual sex has not. In fact, only a few verses after 1 Corinthians 6:9, Paul emphatically declares that food and sexual immorality are not to be regarded in the same way. “God will destroy both [food and stomach]. The body is not meant for sexual immorality, but for the Lord” (1 Cor. 6:13). Because our body is the “temple of the Holy Spirit” (1 Cor. 6:19), any form of sexual immorality is a serious offense to God—including homosexual sex. My concern is that Lee’s interpretations may lead to moral indifference.

Torn is an honest memoir of a Christian wrestling through issues of sexuality, but Lee’s conclusions for how to live appear to be more anthropocentric than Christocentric. For a better understanding of the Bible in its proper context as it relates to the issue of homosexuality, I would look elsewhere.

Christopher Yuan is a speaker (www.christopheryuan.com) and author of Holy Sexuality and the Gospel: Sex, Desire, and Relationships Shaped by God’s Grand Story (Multnomah, 2018). He is also co-author with his mother of Out of a Far Country: A Gay Son’s Journey to God and a Broken Mother’s Search for Hope (WaterBrook, 2011). He graduated from Moody Bible Institute, has an MA in biblical exegesis from Wheaton College Graduate School, and a DMin from Bethel Seminary in Minnesota. Christopher is an adjunct instructor of the Bible at Moody Bible Institute.